Marijuana is a very complex plant: many different strains with differing profiles of psychoactive, non-psychoactive, and peripherally-active compounds that impact metabolism.  Most have THC, which activates endogenous cannabinoid receptors and mimics many of the effects of smoked marijuana (eg, see studies by Hart, Wachtel, and Curran).

Do not underestimate the complexity of this plant. 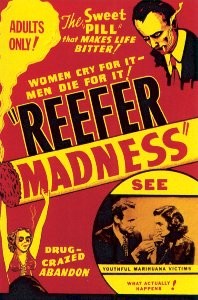 I’m not ‘anti-pot’ as there are far worse drugs out there… however, some advocates make really bad “pro” arguments, like saying it’s actually healthy (or at least not harmful in any way)…
there are many independent lines of evidence which suggest otherwise, metabolically speaking.

Rimonabant, the notorious pot-blocker, reduces appetite and is a fairly effective weight loss drug, but has the unfortunate side effect of doing the opposite of marijuana, psychologically speaking.  See any of the RIO studies, eg: 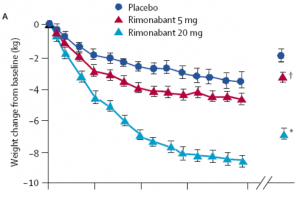 Adverse effects?  Wellll, there’s a drug called Marinol (pure THC) that’s technically an anti-emetic (reduces the urge to vomit); it improves appetite in patients with conditions associated with anorexia or wasting.  It’s a cannabinoid agonist.  Blocking CB1 with Rimonabant induces nausea in some patients: no bueno, but not unexpected given the known effects of Marinol.  Rimonabant is also associated with depression and anxiety (in some patients); also not unexpected.

So, it’s not a good idea to block this receptor pharmacologically (for psychological reasons) or activate it recreationally (for metabolic reasons).  Obesity researchers (and big pharma no doubt) are still looking for a pot-blocker that doesn’t penetrate the brain  to avoid the negative psychological side effects (eg, Klumpers et al., 2013).

Best. Graph. Ever.  The effect of Rimonabant on how stoned participants felt after smoking pot.  Yes, “Stoned” was published in the Journal of the American Medical Association (Huestis et al., 2001). 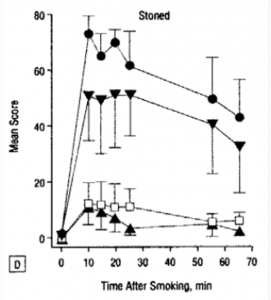 Cannabinoids and mimetics/agonists induce hunger and repress satiety; cannabinoid blockers induce satiety and weight loss.  However, I actually don’t think marijuana is obesogenic aside from its anti-anorexic effects.  Cannabis use is not always associated with obesity, possibly due to confounding and/or the lack of good crossover studies (you can’t really do a proper study in healthy humans with MJ for ethical reasons).  But most rodent studies agree that cannabinoids, acting via cannabinoid receptors, induce metabolic syndrome-like effects in nearly every single tissue and on the whole-body level.

The knockouts & over-expressing rodent models, and pharmacological agonist & antagonist studies are all consistent.  That said, I still don’t think this is the worst recreational drug out there, even among “legal” ones.