However, a small subset of this population fails to achieve normal fasting glucose.  This is likely due, in part, to a type of circadian mismatch induced by aberrant meal timing and excess exposure to artificial light at night.  For an extensive list of citations supporting the former, see “Afternoon Diabetes;” stay tuned for evidence of the latter.  In brief, a combination of delaying food intake for as long as possible after waking in the morning (“skipping breakfast”) and consuming most calories at night = no bueno.  These behaviors can also promote a circadian mismatch and phase delay.  Hint: eat when the sun is up; sleep when it is down.

Exhibit A. Influence of night-time protein and carbohydrate intake on appetite and cardiometabolic risk in sedentary overweight and obese women (2014)

In this study, the participants were asked to have a late-night snack about an hour before bedtime, consisting of ~30g whey protein, casein, or carbohydrate.

After doing this for just a few days, they all required significantly more insulin to maintain normal fasting glucose: 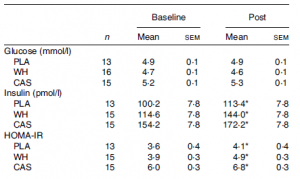 Avoiding carbs at night (both protein groups) seems to do slightly better regarding energy expenditure, but this doesn’t negate the impact on insulin resistance imo: 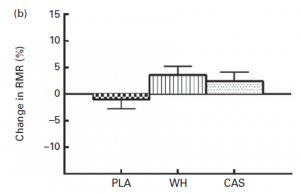 Admittedly, the context of this study is very different, and not at all looking at the impact of skipping breakfast + late night eating on fasting blood glucose… but it sort-of-did, albeit indirectly.

Focus on the grey areas: 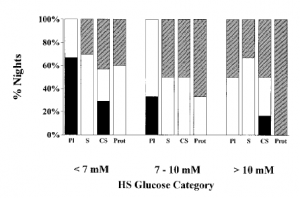 Grey area = impaired fasting glucose.  Regardless of baseline fasting blood glucose (<7 mM, 7-10 mM, or >10 mM), and meal composition, eating late at night resulted in fasting hyperglycemia… consistent in two wildly different patient populations (obese/overweight women in the first study; type 1 diabetics in this study).  Ergo, this more likely reflects a bona fide circadian phenomenon.  Best advice?  Dawn is a good time to phe-NOMNOMNOM, or break your fast.  Cut down on food intake at night and I bet you’ll be hungry for it.  “Cut down” =/= skipping dinner; just keep it light and preferably prior to sunset.

Part 2. Does coffee count as breakfast?

Imo, a fast is broken with calories… but this is my opinion, and whether it’s BCAAs

), or regular coffee (with cream) hasn’t been fleshed out experimentally.  Until that is done, I don’t see anything wrong with bacon and eggs.  Or a hearty kale & mushroom omelette (hahaha “kale,” which I think tastes pretty nasty IRL).  Or whatever, just don’t avoiding eating for as long as possible after waking only to binge at night: the available evidence does not support this strategy (see above, and here).

Ymmv?  Perhaps, but it’s not scientific (or logical): if skipping BF & having late dinners is how our ancestors actually ate, it may have been the most efficient way to accumulate fat mass, in order to survive periods of famine.  (But that’s all speculation.)

At night, have a light dinner, avoid artificial light, and sleep well.  That’s all I got.

Oh yeah one more thing: some LC advocates think LC makes circadian rhythms irrelevant, or perhaps none of this applies in the context of a low insulin, ketoadapted state.  That is wrong given that many still have elevated fasting blood glucose levels… and it’s a silly notion: circadian rhythms always apply, because we’re humans, who evolved on Earth.

Affiliate links: It’s 2018, join Binance and get some damn cryptoassets or downloadHoneyminer and get some Bitcoins for free!

Seriously? There are people out there who think circadian rhythms do not apply to them? Good article, Bill. https://t.co/5B6ICYTAzJ