This study is similar to the one discussed in Ketosis series # 2, (A high-fat, ketogenic diet induces a unique metabolic state in mice [Kennedy et al., 2007 AJP]), both were 12 weeks long and used identical ketogenic diet.  However, the high fat/Western diets and body composition of mice on the ketogenic diet are different.

The macronutrient ratios are all over the place, but the worst part is that there is no attempt to control for the types of fat, protein, and carbs.  For example, the fats in the ketogenic diet are primarily lard and butter, while those in the Western diet are tallow and shortening… so basically the ketogenic diet is MUFA and PUFA while the Western diet is SFA and trans fat!  What exactly are we trying to compare, the effects of different dietary fats?  sacrebleu!

In accord with previous studies, mice on a ketogenic diet weigh less and eat more than those on chow or high fat diets.  Yada yada yada, just show this figure to the next person who promotes “eat less and move more” for weight loss.  (activity wasn’t measured in this study, but was here, which showed no change or even slightly reduced activity in mice on a ketogenic diet)

Divergences from Kennedy 2007: #1) body composition of KD mice in this study is identical chow;  lean mass in WD is less than chow and similar to KD.

To refresh your memory, here are the data from Kennedy 2007:

The high fat diets are different, so a direct comparison is not possible.   But there is definitely a difference in how KD mice fared relative to chow, and the ketogenic diets were identical so a direct comparison is OK  (there were some other minor differences, like the age when the mice were started on the diet [6 wks vs. 8 wks]).  In Kennedy 2007, chow mice had the lowest body fat percentage, while in Garbow 2011 chow and KD are equivalent.  The differences are small, so it can slide (for now).  But FTR, since the ketogenic diets are identical, it would’ve been nice for Garbow to address some of these discrepancies in their discussion.

From the body fat data above and food intake data below (which I extrapolated from diet composition and caloric intakes), it is clear that eating a lot of dietary fat won’t make you fat, even if it’s lard and butter.  KD mice ate 3x more fat than WD and almost 10x more than chow, but it didn’t cause them to get fat.  It’s only when sugar is added into the mix, as in the Western diet (40% carbs from sucrose & starch), when fat mass begins to accumulate.

Again, it’s surprising that KD mice ingested so much less protein yet maintained all of their muscle mass.  However the textbooks do say, explicitly, that nitrogen balance can be maintained when dietary protein is reduced if total caloric intake increases.  And that’s what happened (caloric intake increased), and maybe that explains the lean mass.  But it seems to me as if the increase in calorie intake (+20%?) was too much less than the reduction in protein intake (-75%) to completely account for the lean mass.  IOW, these data confirm that ketogenic diets are at least 50% magic.  I say that because the relationship between lean mass, protein, and calories is firmly adhered to by the other groups in this study.  I.e., chow mice ingested more protein than WD but the same amount of calories, and accordingly they had more muscle mass.

As expected, the ketogenic diet caused an increase in liver fat.  Not to worry, this is simply a product of the diet … KD = very low carbohydrate intake, so hepatic glycogen stores will be reduced; but the liver still needs energy and fat is in high abundance, so the liver accumulates fat instead.  It’s more physiological than pathological. 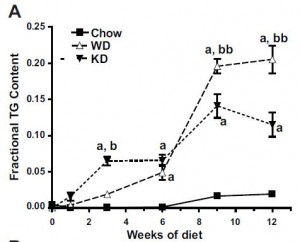 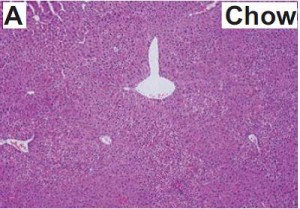 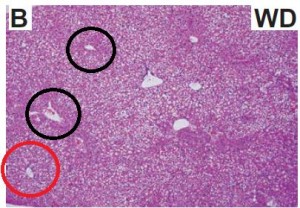 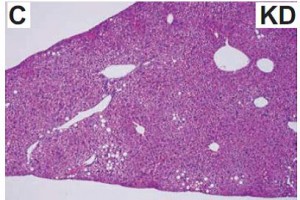 Both diets were casein-based high fat diets, with carbs coming from sucrose and starch.  However, the fat source in D12451 is lard/soybean oil (7:1) while that in TD.96132 shortening/tallow (1:1).  Therefore, despite being fed a similar amount of fat, the WD mice in Garbow’s study were fed trans fat, which is surely worse for the liver than the lard that was fed to the HFD mice in Kennedy’s study.  This likely explains why the livers of Kennedy’s HFD mice were ~1.3x fattier than control while the livers of Garbow’s WD fed mice were ~10.3x fattier than control.

So, going back to the eternal complaint against most diet researchers: get a clue about what you’re feeding your mice or consult a nutritionist before wasting taxpayer’s money on bunk diet studies.