directly from the manuscript [sic]: “The control diet was a conventional food pattern containing 40 per cent fat calories, mostly of animal origin. The design of the experimental diet involved substitution of vegetable oils for about two thirds of the animal fat, total fat content being kept about 40 percent. An attempt was made to stabilize the iodine value of the control diet at 55 and that of the experimental diet at 100. Multiple vegetable oils were used, the choice depending more on pragmatic than on theoretical considerations. In order of decreasing quantity, corn, soybean, safflower and cottonseed oils were employed.”

A controlled clinical trial of a diet high in unsaturated fat in preventing complications of atherosclerosis (Dayton et al., 1969 Circulation)

Clearly, the experimental diet successfully lowered serum cholesterol…  Total mortality was not significantly different, but:  “Deaths due to nonatherosclerotic causes numbered 71 in the control group and 85 in the experimental group.” keep those numbers in mind.

Exhibit B: an early cholesterol drug study, circa 1984

not for the faint-hearted.

CHD mortality was reduced by 30% in the cholestyramine group but all-cause mortality only decreased by 7%.  Therefore some of the lives saved from CHD were lost to something else.  What else?

Did cholestyramine cause a 7% reduction in all-cause mortality because it lowered serum cholesterol levels?  Of the 8 people who died, 3 people on cholestyramine were drunk compared to 1 on placebo.

an alternative yet equally equivocal interpretation: when treated with cholestyramine, patients are twice as likely to kill themselves and 3 times as likely to die by drunk driving.

Exhibit C: fibrates on trial, circa 1987 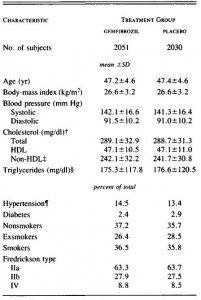 Here’s what gemfibrozil does to blood lipids: 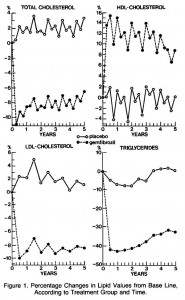 Indeed, gemfibrozil does to which it is supposed. … with some minor side effects: cancer rate: 15.1 in the treated group compared to 12.8 in placebo…  10% lower LDL and 18% more cancer.   Overall, gemfibrozil was associated with a 6% increase in mortality: 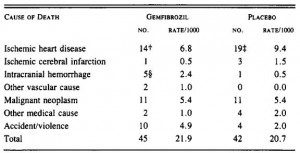 Patients taking gemfibrozil were 2.5 times more likely to die of accidents or violence. That is strikingly similar to what was caused by a 20% reduction in LDL during cholestyramine treatment in the LRCC (above) and the 20% reduction in overall cholesterol levels when animal fat was exchanged with vegetable fat.

Most of these studies were on “healthy” subjects.  Maybe high LDL is bad.  …  Maybe low HDL is bad.  …

don’t fuck with your cholesterol levels.

This entry was posted in Advanced nutrition, Dietary fat. Bookmark the permalink.