But with a smidge of stick-to-it-iveness, performance completely recovers, in virtually every.  measurable.  aspect.

This was shown years and years ago, in a seminal study by Drs Phinney

However, go low carb for long enough and the syrup begins to flow like water.  I lack the time to show what “long enough” entails, but  4 out of 5 studies on low carb diets and performance that only last a few days will show this.  Ketoadaptation takes time; ~3 weeks.

and colleagues did was simple: take a few cyclists and measure their physical performance before and after 4 weeks of an isocaloric super-low carb diet (~20 grams of carbs per day).  That’s all.  But in my opinion, this study and the preceding one in 1980 are two of the most important diet & exercise performance studies conducted to date.

While medals and trophies generally reflect fitness levels, aerobic power, and overall physical prowess, they aren’t very scientific.  For this, one thing we have is VO2 max.  It is basically how well you can get more oxygen when you need it.  And RQ reflects the source of the fuel being burned (1 = carbs; 0.7 = fat).  After ketoadaptation, the athletes in Phinney’s study were able to perform just as well while burning fat as they were while burning carbs (ie, same VO2 max but lower RQ).

With me so far?

What happens during ketoadaptation that makes it possible to jump-lift-run-climb just as good as high carb?
1. magic
2. requires more information:

Going back to that analogy, syrup in the tree is like stored fat, the spout is mitochondria, and ATP is the rate of syrup flowing into your bucket. 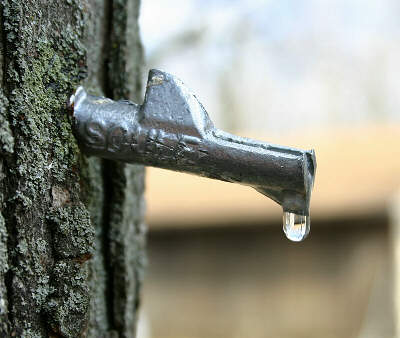 On the other hand, gas in the tank is glycogen, the hose is mitochondria, and ATP is the how fast your tank fills.  The faster ATP collects in either scenario, the better athletic performance.

It doesn’t make perfect sense, but that analogy will start to grow on you.

So how would you get your bucket filled with syrup faster?  Try “more spouts.”  And reduce the viscosity of your maple syrup by diluting with some ketones.  More than 3 weeks on a ketogenic diet and you have more better mitochondria and can generate ATP just as fast as high carb.

This is biochemistry on a 600-level and you’d need to ask Drs Veech or Watford for the details, but for now, just believe that more better mitochondria means faster ATP production, which is why after ketoadaptation it’s possible to perform as well as high carb.  It’s also why before ketoadaptation on a low carb diet, athletes suck.  You need either mito & ketones or glucose.  Before ketoadaption, you have neither.  Enter: the mice.

Admittedly, this isn’t the best study to demonstrate the point because a ketogenic diet made from trans fats will have some detrimental effects down the line, but the high fat ketogenic nature of such a diet is sufficient to induce ample mitochondrial biogenesis.

Pictures at an exhibition of murine muscles from mice fed chow (CD) or a low carb ketogenic diet (KD).  See all those new mitochondria (arrows)?

And again, see all those BIG mitochondria (asterisks’)?

This isn’t an isolated finding.  Take a group of mice and jack up their plasma free fatty acid levels to those seen in Phinney’s ketogenic dieters for a short while and you get a similar effect.  Increased mitochondrial everything (Garcia-Roves et al., 2007): 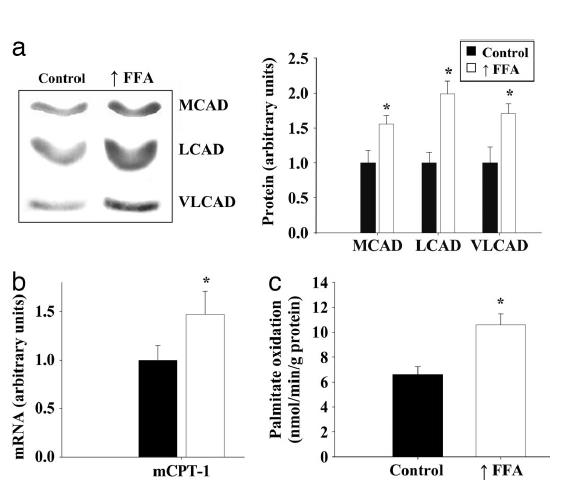 The magic of a low carb ketogenic diet takes time to develop.  During ketoadaptation, the ability to get ATP from fat & ketones soon rivals that of glucose.  Mitochondria don’t happen overnight…  they take about 3 weeks.