Nutritional ketosis is a normal, physiological response to carbohydrate and energy restriction.  A ketogenic diet

is an effective weight loss strategy for many.  Ketoacidosis

, on the other hand, is a pathological condition caused by insulin deficiency.  The common theme is low insulin; however, in ketoacidosis, blood glucose levels are very high.  Ketone levels are elevated in both states, although are 10-20x higher in ketoacidosis (~0.5-2 vs. > 20 mM).  Nutritional ketosis and ketoacidosis should not be confused with one another, and a ketogenic diet doesn’t cause ketoacidosis.

Brownlee, 2005  (technically, this figure shows the theoretical mechanisms underlying the pathology of the long-term effects of moderate hyperglycemia [<180 mg/dL]; not the acute effects seen in ketoacidosis…)

In people on a ketogenic diet

, blood glucose levels are not increased.  This is an important aspect differentiating nutritional ketosis from ketoacidosis.   Yes, gluconeogenesis is modestly elevated to partially compensate for the reduced carbohydrate intake…  it only partially compensates for the reduced carbohydrate intake because some tissues decrease their glucose utilization, relying in fats and ketones instead (ie, less glucose is ‘needed’). 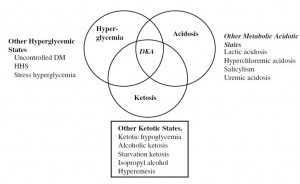 Ketone bodies are produced when glycolysis is low & hepatic fatty acid oxidation is high.  Low glycolysis is important because certain byproducts of glucose metabolism inhibit fatty acid oxidation; eg, citrate inhibits CPT-1, which prevents fatty acids from entering the mitochondria.  Also, instead of being available to combine with the acetyl-CoA derived from beta-oxidation, oxaloacetate is instead being used for gluconeogenesis; this doesn’t happen when glycolysis is high.  Ie, oxaloacetate would be be available to shuttle fatty-acid derived acetyl-CoA into the TCA cycle (and away from ketogenesis).

Ketogenesis is significantly higher during ketoacidosis, and certain ketone bodies are acids –> acidosis.

This doesn’t occur during nutritional ketosis because the excess acidity is easily buffered.  Hyperglycemia in ketoacidosis causes dehydration because when glucose levels exceed ~180 mg/dL, some is spilled over into urine causing osmotic diuresis.  This exacerbates acidosis and doesn’t occur in nutritional ketosis because there is no hyperglycemia. 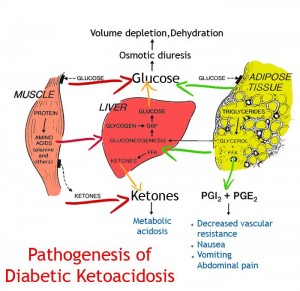 Safety of the ketogenic diet has been demonstrated in numerous short-term studies, but also in this very long one in two patients with type II bipolar disorder (>2 years). (yeah, only 2 patients; but also: over 2 years). 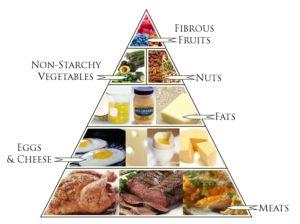 What is a ketogenic diet

Ketogenic dieting is safe, and can be beneficial.  Ketoacidosis is pathological, and can be fatal.

Check out my Patreon campaign!! Five bucks a month for full access and there are many other options. It’s ad-free and you can cancel if it sucks 🙂