Bifidobacteria undoubtedly like resistant starch (RS).  They bind and hold on tight, an effect mediated by cell surface proteins.  Big thanks to Tim Steele for passing along many of the studies cited here.  One of said studies showed that treatment of bifidobacteria with proteases abolished the RS binding; but even dead critters would bind if their cell surface proteins were intact (Crittenden et al., 2007).

I suspect fermented foods have this all figured out.  The microbes in sauerkraut are going to be embedded in & all around the cabbage polysaccharides; likely protected from digestive enzymes (to a degree) and holding on tight.

Something similar has been shown for galactooligosaccharides

(GOS) (Shoaf et al., 2006).  In this study, GOS, but not a variety of other fibres, inhibited the binding of pathogenic gut microbes to intestinal epithelial cells.

These mechanisms are likely not mutually exclusive, and both seem like they could benefit the host (us).

Probiotics taken by themselves barely survive the trip (Prilassnig et al., 2007).  This study tested 2 different bifidobacteria-containing products (Omniflora & Infloran)… they recovered none of the supplemented bifidobacteria in the feces from people given Omniflora, and in only 1 out of 4 samples for Infloran.  And in a study by Kekkonen, probiotics alone had little effect on bifidobacteria, but throw in 3.8 grams of GOS

If you have long-standing GI issues and suspect dysbiosis: 1) you’re probably right; and 2) fermented foods could fix the problem.  If they don’t, consider: Jane Plain’s eradication protocol of low carb diet plus vinegar, or running a course of pre & probiotics.

should ideally be administered with a preferred fuel like GOS, RS, or dark chocolate.  Tzounis and colleagues showed 4 weeks of eating the kind of cocoa flavanols found in dark chocolate tripled the amount of bifidobacteria recovered in fecal samples: 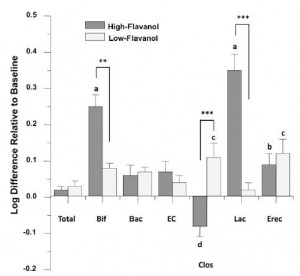 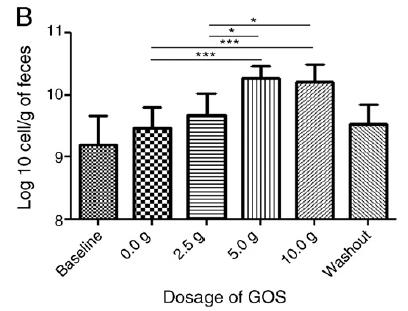 Note: in neither of these 2 studies did the participants receive any actual probiotics.  Given the findings of Kekkonen, combining bifidobacteria with GOS is likely optimal, and may even allow for a lower dose of both.

Yang (2013) tested a variety of different fibres in an in vitro colon simulator for their bifidogenicity: pectin, guar gum

, and type II resistant starch (high-amylose corn starch).  Surprisingly, pectin killed it!  > 20x increase in bifidobacteria, compared to 6-7x by inulin & RS  …however, I’m currently viewing this one with skepticism because… pectin beating out inulin and RS?  Pectin

?  Warrants further investigation, or at least a human study  (an apple a day?)

Types II & IV RS vs. bifidobacteria
Intervention in this study was 100 grams of plain crackers, or crackers enriched with either 33 grams of type II RS (Hi-Maize 260

At baseline, 2.1% of microbiome was comprised of bifidobacteria.  After 3 weeks, bifidobacteria was increased to 5.8% by RS II and 11.1% by RS IV.  A 5x increase is nothing to scoff at in a triple crossover study.

Butyrate accounted for 33.3% of the SCFAs in RS III group, although total SCFA production was decreased… so overall butyrate production may have been lower.  I imagine in vivo flux measurements are exceedingly difficult, so it’s hard to say if this is confounded somehow.

Why I think this study is awesome: it looks like the microbiome of subject “I” had little taste for RS!  And that of subject “J” completely digested potato starch but had no love for banana starch. 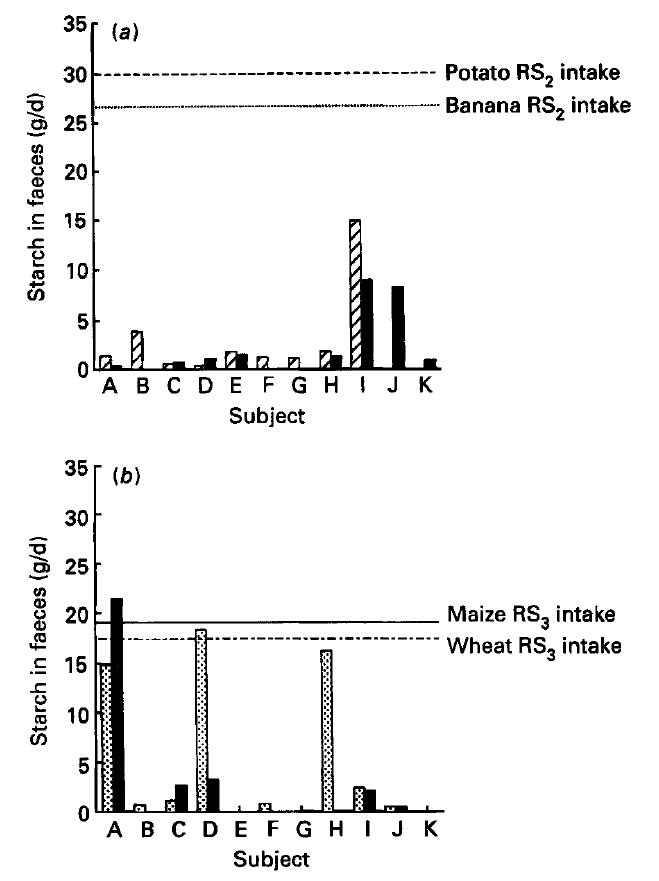 In this study, all of the fibres increased SCFA production relative to the fibre-free diet duh, and the type III RS did seem to get metabolized to butyrate to a greater degree than in Stewart’s study.  This also suggests a subtype-specific effect: RS III produces less SCFAs & butyrate than raw potato starch.

Short chain fatty acids: GOS
Total amount and speed of SCFA production is increased with GOS treatment (in vitro; Bouhnik et al., 1997).  Data in the figure below are taken after 1, 2, 7, and 14 days of GOS supplementation.  SCFA production is measured at time zero, and 2 & 5 hours after adding GOS to fecal slurries (sorry gross I know).  After 14 days of treatment, total SCFAs were increased (compare the 0 time point in days 1 & 14) and faster (compare the 2 & 5 hour time points in days 1 & 14): 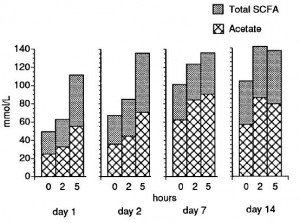 Raw potato starch vs. GOS
The direct comparison study hasn’t been done and likely won’t.  *sigh*  They seem to perform similarly… which is odd, considering potato starch comes from potatoes and GOS is found in breast milk.

A lot of people have expressed concern over the net carbs in raw potato starch.  Cummings and Raben estimated the indigestible fraction to be 40 and 54% (w/w), respectively.  I get it.  For what it’s worth, I’m convinced that said net carbs won’t impact your blood glucose levels…  however, collectively, the findings above suggest there are a lot of similarities between raw potato starch and GOS.  Both are bifidogenic and both increase SCFA production.  Gram for gram, GOS is more potent than raw potato starch.  And since the common daily doses of raw potato starch are significantly greater than GOS, they’re in the same ballpark price-wise.   Yes, including shipping.

For full access to all articles and more (or if you just like what I do and want to support it), head over to Patreon! It’s only three bucks a month and there are many other options. It’s ad-free and you and you can cancel if it sucks ????