There are some things you can control and many more you can’t (eg, circadian disruption, alcohol, BRCA, etc.). It’s impossible to know how much circadian arrhythmia contributes to cancer risk, but the epidemiology is strong and some of the mechanistic work makes sense. It has to do with LIGHT and melatonin.

Tl;dr: a robust circadian rhythm and proper melatonin peak at night mitigate a lot of other factors. If there’s artificial light at night, then there’s no melatonin, and that’s like, SHIELDS ARE DOWN! And it doesn’t take a lot to shut ‘em down.

There’s also a dietary angle, but it’s borderline one of those things you can’t change (unless you try really really hard) (more on this below), or at least not nearly as fast as you can fix melatonin (see HERE).

(2) Chlorpromazine raises serum-melatonin; there are reports that psychiatric patients taking chlorpromazine have a lower incidence of breast cancer.

(3) Although information is lacking on breast cancer, the pineal and melatonin may influence tumour induction and growth in experimental animals.

(4) The demonstration of a melatonin receptor in human ovary suggests a direct influence of this hormone on the ovarian function, and possibly oestrogen production.

(5) Impaired pineal secretion is believed to be an important factor triggering puberty (early menarche is a risk factor for breast cancer).” 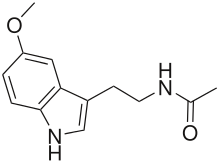 The dark side of light at night: physiological, epidemiological, and ecological consequences (Navara and Nelson, 2007)

And further observations, for example, that urinary melatonin is prospectively inversely associated with breast cancer (Schernhammer et al., 2008) and total blindness is protective against breast cancer (Flynn-Evans et al., 2009). Total visual blindness is associated with a variety of other problems, but they’re less likely to succumb to artificial light at night-induced melatonin suppression.

For the rest of this article or if you just like what I do and want to support it, head over to Patreon! Three bucks a month for access to all articles and there are many other options. There is a limited number of spots left at the $3 level so sign up soon! You can cancel at any time.
And it’s ad-free 🙂

Discounts: still looking for some hot blue-blockers? Carbonshade and Spectra479 are offering 15% off with the coupon code LAGAKOS. And for some delicious organic broths/stocks, Kettle & Fire is 20% off HERE.