Please forgive me in advance for the crass humor in this post.

Have obesity researchers given up?  Their most recent advice: shit your pants or eat shit.

Exhibit A. The drug formerly known as Zenical and Orlistat, currently marketed OTC as Alli, is one the only medications FDA approved for the treatment of obesity.  The results from Orlistat’s weight loss trials are unequivocal (figure below). 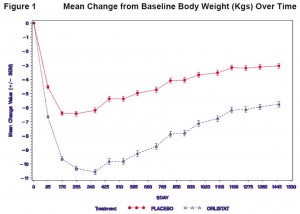 But the list of “Common Adverse Events” is horrendous.  “Common” means it happens in over 5% or 1 in 20 patients.  This was taken directly from the prescribing information. 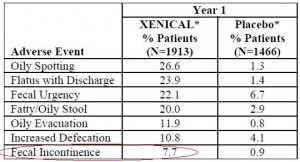 The gut microbiota consists of millions of organisms that reside in the intestines and they are intricately associated with the health of its host.  The microbiota differs markedly between obese and lean people.  In animal studies, transfer of an obese mouse’s microbiota to a lean mouse makes the latter gain fat mass, suggesting a causal relationship.  (if your interested, check it this and this)  Recently, however, scientists have taken it to the next level.  The complete abstract is below.  Fecal transplants (from lean healthy donors) have remarkable effects on glucose tolerance and insulin sensitivity.  I shit you not.

Recent data in animal models revealed that obesity is associated with substantial changes in composition and metabolic function of gut microbiota. Moreover, colonization of germ-free mice with faeces harvested from obese mice resulted in a significantly greater increase in total body fat than colonization with a ‘lean microbiota’. However, data on the role of gut microbiota in human obesity are scarce. Thus, our aim was to examine the effect of faecal infusions derived from lean healthy donors on gut microbiota composition, glucose and lipids in metabolic syndrome.  This study was a double-blind, randomised controlled trial. A total of 18 male subjects with newly diagnosed metabolic syndrome (BMI?30 kg/m2, FPG>5.6mmol/L, TG>1,6 mmol/L with no medication use) underwent jejunum biopsies and subsequent polyethylene-glycol bowel lavage through duodenal tube followed by random assignment to either allogenic (from lean male donors with BMI<23 kg/m2, n=9) or autologous faecal transplantation (reinfusion of own collected faeces, n=9). We studied changes in sigmoidal microbiota composition and fasting lipid profiles at 0.5, 2, 6 and 12 weeks after faecal transplantation. Weight, jejunal gut microbiota (epithelial biopsy) and glucose metabolism (peripheral and hepatic insulin sensitivity as assessed by hyperinsulinemic euglycemic clamp with stable isotopes) were studied before and 6 weeks after transplantation.  Lean subjects were characterized by different sigmoidal gut microbiota compared to obese subjects (by HITChip phylogenetic microarray analysis). Fasting levels of TG-rich lipoproteins (TG/ApoB ratio) were significantly reduced following donor faeces (1.43 ± 0.21 to 1.11 ± 0.18, p<0.01) with no effect after autologous faeces infusion. Resting energy expenditure and basal endogenous glucose production (EGP) did not change in both groups after faecal infusion. Although weight remained stable, an improvement in both peripheral (Rd) and hepatic insulin sensitivity (suppression of EGP) was found 6 weeks after allogenic faeces (median Rd: from 26.2 to 45.3 ?mol/kg.min, p=0.02 and EGP suppression: from 51.5 to 61.6 %, p=0.08) while no significant changes were observed in the autologous treatment group (Rd: from 21.0 to 19.5 ?mol/kg.min and EGP suppression: from 53.8 to 52.4 %, ns). Changes in jejunal microbiota are currently analyzed. Lean donor faecal infusion improves hepatic and peripheral insulin resistance as well as fasting lipid levels in obese individuals with the metabolic syndrome underscoring the potential role of gut microbiota in the disturbances of glucose and lipid metabolism in obesity. Our data could provide pathophysiological insight in the metabolic deviations in obese subjects and a rationale for therapeutic intervention.

For the record, those changes in insulin sensitivity are fairly robust, especially compared to control.  And perhaps the title of this post was too crude; the fecal transplants were administered through a nasogastric tube that goes in through the recipient’s nose and down their throat, so they’re not technically “eating” it.  By the way, those infusions consisted of 300mL (1 ½ cups) infused slowly over the course of an hour, every day for 9 days.  The environment within: how gut microbiota may influence metabolism and body composition (Vrieze et al., 2010 Diabetologia).

This entry was posted in Advanced nutrition, Orlistat. Bookmark the permalink.