I am flabbergasted at how this study played out.  Regardless of whether the eloquence was intentional or not; a wonderful demonstrate that “all calories are not created equal.”

Study design: They started with obese cats and fed them one of two weight loss diets.  The goal was to lose 20% of their body weight at a rate of 1% per day.  Therefore, they were given more or less calories to meet that goal.  The rate of weight loss was controlled.

The high protein diet contained 33% more protein than control (21.4 g/mJ vs. 28.4 g/mJ).  To balance out calories, the control diet had more starch. 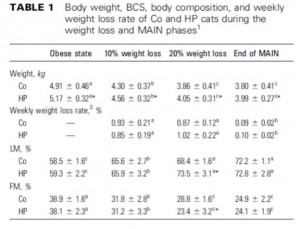 Food intake data (ME = metabolizable energy, just think of it as calories):

It gets better.  Now all the cats are 20% reduced body weight.  Recall that muscle is the main driver of metabolic rate…

During the next phase of the study, the cats were fed enough to keep them weight stable for 4 months.  Because of their high protein diet, cats in that group finished the weight loss phase with more muscle and less fat than control.  During the maintenance phase, they were all fed the same diet, therefore any differences between groups during maintenance was due to the changes that occurred during weight loss (because diets are the same now).  Cats that lost weight via high protein diet required ~16% more calories per day to maintain their weight compared to cats that lost weight on the control diet.  So they got to eat more during weight loss, ended up with less fat mass, more muscle mass, and now have to eat more to maintain their new weight! (presumably because of their increased muscle mass).

This study was in cats, a carnivorous species, so there may have been a species-nutrient interaction; however, these findings while more robust are in agreement with what is seen in humans.  High protein dieters fare better in the short and long-term than low calorie dieters.

I think this study brilliantly illustrates that a calorie is not a calorie.  Dietary protein and carbohydrate may provide 4 kilocalories per gram when burned in a bomb calorimeter, but they are not equally fattening.

That’s about all for the coolness of energy balance in this cat study, but there is one other relevant topic with implications for human body composition.  Cats are carnivores and  experience a greater insulin response to protein than to carbohydrates…

This study design was not nearly as eloquent as Vasconcellos’ (above).  They basically wanted to measure the insulin and glucose response to three different meals.  So it was a triple crossover (each cat tested each meal with a one week washout in between).  They were healthy cats.

Diet 1 was a relatively standard control diet.  Diet 2 was Atkins-esque and is used to treat feline obesity and related disorders.  Diet 3 was another generic therapeutic diet. 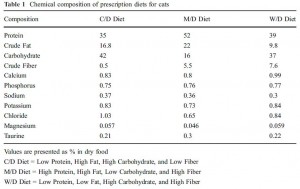 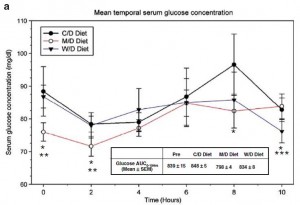 Diet 3 (W/D, inverted triangles) had modestly a greater glucose response, while diet 2 (M/D, Atkins diet, open circles) had the lowest.  This isn’t entirely surprising because diet 2 had the least carbs, while diet 1 had the most. 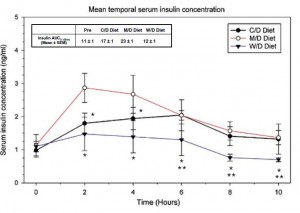 This is almost exactly in line with what was seen in Vasconcellos’ study (above): 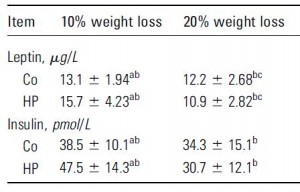 The average insulin levels over the entire weight loss period was 36.5 pM in the control group and 39.1 pM in the high protein group.

These studies were performed in cats, who evolutionarily and genetically differ markedly from humans.  Their status as true carnivores makes it difficult to extrapolate the results to humans.  But there is a large group of scientists, journalists, and bloggers, etc. who implicate insulin per se as the cause of obesity.  In cats, a high carbohydrate diet (standard store-bought dry food) causes obesity, and a high protein diet is an effective treatment.  Furthermore, a high protein diet causes just as favorable changes in body composition in cats as it does in humans.  But the high protein diet is markedly more insulinogenic in cats.  There are a few possible alternatives explanation of which I can think.

Aargh, a clear conclusion can’t be drawn to tie together all of the observations, but option 2 comes close.  N.B. I personally believe other dietary factors like processed foods, industrially produced trans fats, high fructose corn syrup, and grains probably have a big role in insulin resistance, which is associated with obesity, but I’d still like to see a clean cut demonstration of this across all species, or at least mammals, or at least in primates.

OK, so maybe protein is just as insulinogenic as carbs in humans too: 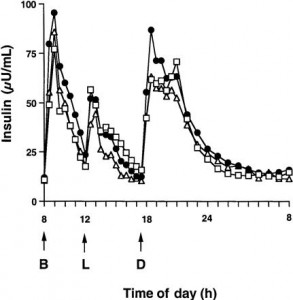 One more wrench in the gears!

This last one is a total doozy.  I feel double-crossed.  never saw it coming.  To the best of my knowledge, industrial trans fats have never failed to maim those who ingest them.  until now.

This study was “different;” they fed pregnant/lactating cats one of four diets and then weaned the kittens onto the same diet as their mother.  In brief, the diets were:

The whole story can be summed up in the following table (which has been heavily edited):

First, please note the red circle.  Body-fat increased 378.38% in control kitties and 576.50% in those fed MSG!!!  MSG is the devil for cats (?).  Interestingly, MSG had no effect on cats fed a high fructose and trans fat diet (302.59% vs. 277.32%)… (??) actually, all cats fed a high fructose & trans fat diet accumulated less fat mass than low fat fed cats.  (???)  This is in agreement with the findings above; cats become obese on a low fat high carb diet and remain lean and muscular on high fat high protein.  I’m surprised the fructose had no effect.  I’m also a little surprised that MSG was far worse than high fructose & trans fat.

Second, please note the arrows.  The red arrows show the effect of MSG on liver enzymes.  In both low fat and high fructose & trans fats, the addition of MSG markedly improved the liver enzyme ALT. The blue arrow shows that high fructose & trans fat is bad for the liver, in agreement with human and rodent data, but this is completely ameliorated by the addition of MSG [in cats] (????).

I have no idea how to interpret these findings from a biological standpoint, but I think it might have something to do with cats being true carnivores.  Cats need meat to live.  MSG is a meat-mimetic; that is, it tastes savory, better than meat, but does not provide any of the nutrients.  I don’t know how MSG would enhance fat gain but improve liver enzymes in cats on a low fat diet, but I think cats on a low fat diet is another problem because a carnivorous diet is not low fat.  And most troubling, trans fats aren’t bad for cats!  Maybe since cats generally eat a relatively high fat diet, the addition of a few grams of trans fats are well tolerated (because they comprise a small fraction of the total fat intake).  Trans fats were shown to be harmful in rodents & rhesus monkeys, two species who consume a low fat diet in their natural habitats.  Since humans are omnivores, does this mean that trans fats are worse for monkeys & rodents than they are for us?  IOW, does extrapolating the results from rodent studies to humans inevitably exaggerate the harm of trans fat?  Food for thought.

This entry was posted in Advanced nutrition, Trans fat. Bookmark the permalink.