Abstract (edited): The electric light is one of the most important human inventions. Sleep and other daily rhythms in physiology and behavior, however, evolved in the natural light-dark cycle, and electrical lighting is thought to have disrupted these rhythms. Yet how much the age of electrical lighting has altered the human circadian clock is unknown. Here we show that electrical lighting and the constructed environment is associated with reduced exposure to sunlight during the day, increased light exposure after sunset, and a delayed timing of the circadian clock as compared to a summer natural 14 hr 40 min:9 hr 20 min light-dark cycle camping. Furthermore, we find that after exposure to only natural light, the internal circadian clock synchronizes to solar time such that the beginning of the internal biological night occurs at sunset and the end of the internal biological night occurs before wake time just after sunrise…

In other words, they compared circadian events during 2 weeks of normal life to 2 weeks of 100% camping.  And camping won.

Camping vs. Light exposure
All of these things are somewhat obvious, I just thought it was cool that it was actually measured.

Regular week: 979 lux from artificial lights, TVs, iPhones, sunlight, etc.  Just think of this “lux” as baseline, or how much light you are exposed to on a daily basis.

Camping: 4487 lux from sun and campfires.

Similarly, total light exposure was 3-4x higher when camping probably because it is 100% sunlight – no kitchens, dimly bedrooms, windows, or dark hallways. 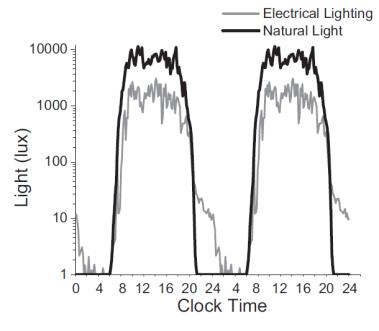 Camping: everything occurred 2 hours earlier, even though they only went to bed about an hour earlier.  So, melatonin started increasing ~3 hours prior to bedtime.  Sleep duration was the same in both conditions.  Melatonin onset magically timed up with sunset, ie, circadian proper; and melatonin offset occurred prior to waking up <– that seems important… groggy in the morning?  The authors noted that in general, “the circadian low point in brain arousal, as defined by cognitive performance level or physiological markers of sleepiness, occurs after habitual wake time, near to the timing of melatonin offset.”  When camping, melatonin offset occurred 50 minutes prior to waking up.  Can you intellectually conceive an altered universe where you have absolutely no desire for coffee in the morning? 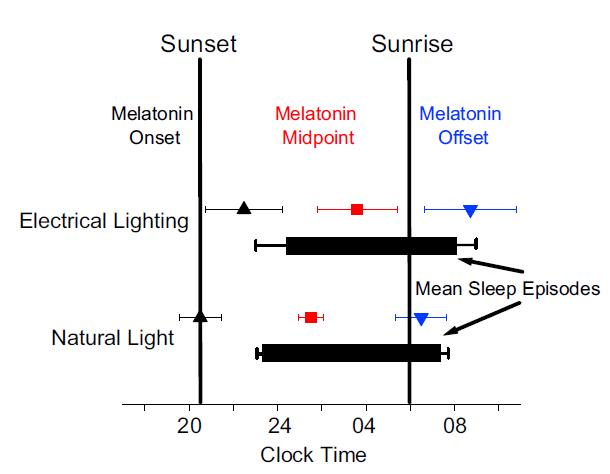 Part 2.
What comes first…  Corbalan-Tutau (2012) showed that people with metabolic syndrome had lower evening melatonin levels and lower morning cortisol levels. (I bet a camping trip would do them some good.) 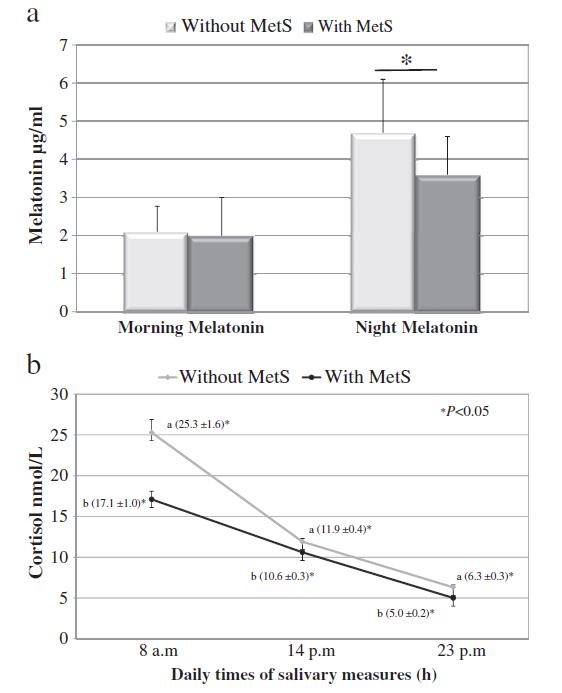 Tyrosine hydroxylase, an enzyme involved in dopamine synthesis, is also light-sensitive (de Lima 2011): high in the morning –> declines all day –> and is then reactivated at night, theoretically to recharge for high morning dopamine levels. 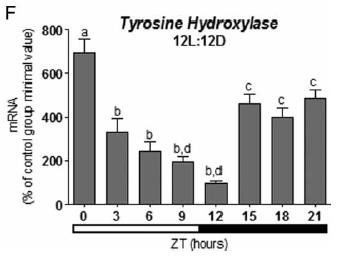 And I’m just going to assume that this too is perturbed in metabolic syndrome, thus why bromocriptine is efficacious here.   Perhaps camping would fix this, too.

None of these findings bode well for submariners, astronauts, or even shift workers.  Probably doesn’t apply too much to the former two, as they are generally healthier than average to begin with.  But shift workers… unless you’re like Ben Morgan or Jane Plain, who are mindful of the importance of light exposure, sleep, and diet, then you might want to consider paying attention.  In a report by Straif (2007), shift work was deemed a “probable” cause of Significant Morbidity.

Melatonin vs. insulin sensitivity
Disclaimer: I’m very possibly losing sight of the forest for the trees (wouldn’t be the first time)…

Spurred on by a comment from Jane Plain in last week’s post, I decided to reassess melatonin (see comment for background info).  My conclusion: the effects of plain old melatonin on the metabolic condition seem utterly disconnected those of circannual melatonin rhythms proper.

Observational data:
Melatonin secretion and the incidence of type 2 diabetes (McMullan et al., 2013)
Nurses’ Health Study: Most of the info in the table below is known: the women who later went on to develop diabetes were heavier, sedentary, inflamed, and insulin resistant.  But they also had significantly lower melatonin:

And when the whole group was combined and divided into tertiles of melatonin secretion, high melatonin secretion is also associated with insulin sensitivity (and  to take a cheap shot at ELMM –> BMI was linearly though statistically non-significantly related to physical activity 😛 )

at 9am and another nickel at 9pm, for four weeks.  Liver enzymes improved.  NASH patients are insulin resistant but do NOT have lower melatonin levels… although pharmacologically enhanced melatonemia (~4x increase) reduced insulin & insulin resistance (and increased leptin).

Another intervention study, and this one was an almighty crossover (albeit not a very good one): Garfinkel et al., 2011.  Diabetic insomniacs treated with 2 mg prolonged-release melatonin

2 hours prior to bedtime for 3 weeks.  Result: No change in fasting blood glucose, but HbA1c declined by about 1 percentage point.  N.B. 2 mg at night is quite different from 5 mg BID.

These findings are amply supported by animals studies, but my gut produces 500x more melatonin than my brain and it tells me animal studies may not fully replicate the human circadian condition.  Soapbox: dodgy evidence that supports your theory is still dodgy evidence even though it supports your theory.  I’m not saying all animal studies are bollixed, I’m just saying this particular topic is very nuanced.  Laboratory mice reside in a small temperature & light-controlled box and usually only live through one circannual voyage if their lucky (unlucky?).  End soapbox.

Possible reconciliations: 1) Perhaps autumnal waxing melatonin levels exert tissue-specific effects on insulin metabolism geared to promote body fat growth…  2) Alternatively, perhaps oral melatonin is different from brain melatonin (eg, local antioxidant effect on liver, etc.), although not sure how this would account for the reduced “melatonin secretion” seen in McMullan’s pre-diabetics.  But 3) maybe urinary melatonin metabolites reflect gut melatonin and have nothing to do with brain melatonin.  Given the abundance of alternate explanations, I’m beginning to think this is a rabbit hole I shouldn’t have wandered down.

@CaloriesProper a rabbit hole that will challenge all you know and believe. That is the beauty of science; no matter our beliefs it’s true