Summer is fattening. Don’t do it in winter.

More on seasonal eating in what appears to be the primary model for its justification for use in humans – hibernating mammals.

How it goes, or so they say: in summer, hibernators massively overeat, including carb-rich foods, in order to generate muscle and liver insulin resistance, so as to promote body fat growth.  The long light cycle reduces evening melatonin, which pushes back the usual nighttime peak in prolactin, which causes an abnormal resistance to leptin, which induces hypothalamic NPY and subsequent carbohydrate craving.  Ergo, summer is fattening.  In today’s day, increased artificial lights guarantee year-round pseudo-summer; and we no longer experience the benefits of the short light cycle: longer sleep times (akin to hibernation) and fasting – either complete fasting as in hibernation, or pseudo-fasting, ie, a ketogenic diet. 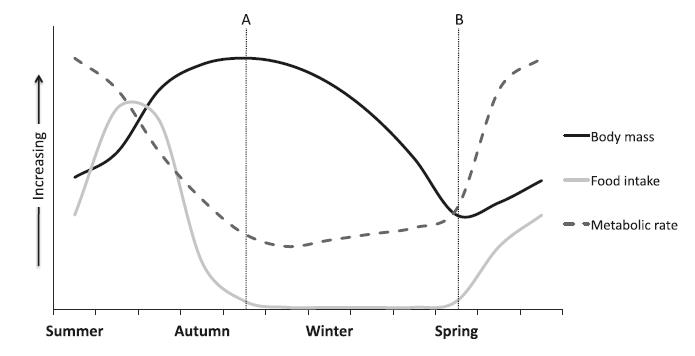 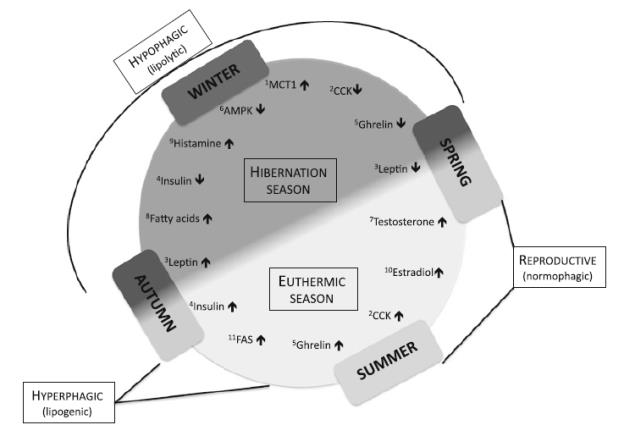 There are a lot of steps in this line of reasoning: light exposure –> melatonin –> prolactin –> leptin –> NPY –> carbs –> obesity.

There appears to be a relationship between melatonin and prolactin, which is one of the more tricky ones.  Eg, Jimenez-Ortega (2012) showed melatonin suppressed prolactin secretion… this could be interpreted to mean that with less melatonin around (ie, long light cycle = summer), there would be more prolactin (later in the day?); circadian prolactin timing is a bit foggy: 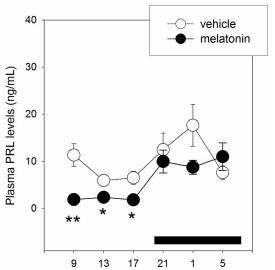 However, in a rat study (Claustrat et al., 2008), chronic light exposure appeared to increase daytime prolactin levels, which fills that potential gap in the logic:

Support of prolactin’s role in food intake: Birketvedt (2012) showed that people with “Night Eating Syndrome” had significantly higher levels of prolactin during the day, and overweight NES exhibited a delayed peak in prolactin (although total levels were lower than in normal weight NES): 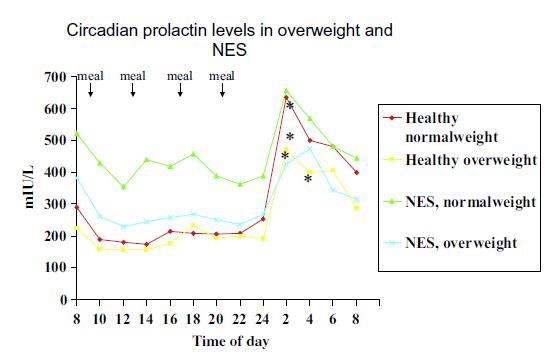 Park (2012) reported that prolactin improves insulin sensitivity – lower overall prolactin during long light cycles would support this, ie, when fat mass is growing (prolactin is supposed to be a winter hormone, but it’s only supposed to be elevated at night, after the melatonin surge… shorter sleep times cause prolactin to ‘spill over’ into the daytime = timing matters).  Also, dopamine antagonists (winter brain) increase prolactin whereas dopamine agonists decrease it.  Bromocriptine (summer brain), a classical prolactin antagonist, also reduces leptin (low leptin = hunger, sometimes, which isn’t exactly the same thing as leptin resistance, but may be seen to have a similar effect in some contexts).

It’s a bit of a stretch – trying to extrapolate the abovementioned day-to-day effects to a 10-day icv infusion of prolactin in rats – but Naef (2007) showed this treatment caused a pretty robust resistance to icv leptin injections: 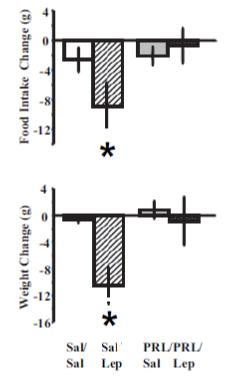 Furthermore, Park (2011) showed that ketones, which would be elevated during winter (hibernation or on a ketogenic diet), improve leptin sensitivity; thus, it might be concluded that lower ketones, as promoted by a high carb summer diet, reduces leptin sensitivity (also supported by the effect of fructose, found in summer fare, on leptin sensitivity).

The leptin-NPY connection doesn’t require fact-checking.  It is known.

I am skeptical about food selection or diet choice paradigms in animal studies, but here it goes anyway…

Wang (1998) showed that rats who naturally prefer carbs over other macronutrients had higher NPY levels.  This alone wouldn’t suggest causation, but in combination with Glass’ findings above and Welch’s (1994), I’m comfortable saying that NPY causes animals to “crave” carbs.

So there you have it.  It’s stringing together many different lines of logic, but it makes sense (prolactin is the tricky one, imo).  Lots of indirect, independently sourced pieces of evidence to suggest that summer is, indeed, fattening.  Don’t do it in winter = turn out the lights and go keto.

Check out my Patreon campaign!! Five bucks a month for full access and there are many other options. It’s ad-free and you can cancel if it sucks 🙂

Affiliate links: join Binance and get some cryptoassetsor download Honeyminer and get some Bitcoins for free! And now you can mine Bitcoin from your Chromebook!