I didn’t want to blog about the artificial sweetener study; to be honest, I didn’t even want to read it.  I just wanted to report: 1) how many Diet Cokes are we talking about; and 2) when are you going to die.

worked the best (worst) in the mouse study, so they tested it in humans.  This was the part I found most relevant: seven healthy volunteers (5 men & 2 women, aged 28-36) who did not typically consume a lot of sweeteners were recruited and given 120 mg saccharin three times per day.  360 mg saccharin is ~10 packets of Sweet’n Low.

Exhibit A: 3/7 people tolerated it just fine; the other 4 not so much… or not? The study design, or rather data presentation, is cryptic.  A glucose tolerance test was conducted every day of the experiment.  They combined data from days 1-4 and days 5-7.  This doesn’t make much sense: why not just use day 1 vs. 7?  Artificially inflating statistical power..?

…foul play?  I guarantee the figures above would look MUCH sloppier, and probably lack statistical significance if we were just looking at Day 1 vs. Day 7.

Did something magical happen on day 5 that was fundamentally different from day 4? It appears so, at least for “Responder #3” :s 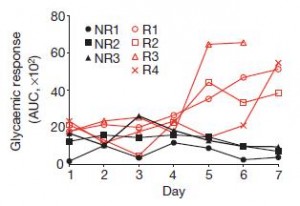 ^^^those are individual data points… that degree of variability pretty much confirms the above speculation about the tight GTT data.

Exhibit B. Gut microbes shifted more in responders than non-responders.  I think. 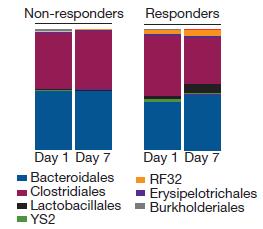 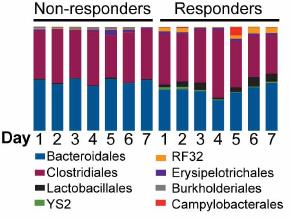 Exhibit C. Unfortunately, the most compelling data are from more animal studies.  The human data don’t scare me.

next logical step? Fecal transplants: smear human shit on mice, which for some reason I find more gross than smearing mouse shit on mice.  But the data recapitulate the human study quite nicely: 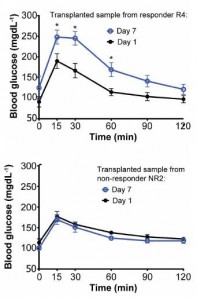 Some of the more marked changes in the microbiome were: huge increases in Bacteroides fragilis, Weissella cibaria, and Candidatus Arthromitus.

My take on this study: diet!?

What differentiates a responder from a non-responder?  Responders appeared to have a different microbial profile at the beginning of the study.  And it appeared to change more than the non-responders, but I have to ask: 1) really? bc hard to tell from the figures; 2) if so, did it change because “responders” responded to the sweeteners by changing their diet? Was it different in the beginning because of different baseline diet? In a study with only 7 participants, this information could’ve & should’ve been comprehensibly assessed, reported, and discussed.

And grouping days 1-4 and 5-7 seems weird or misleading at best, nefarious at worst.

Sucrose versus saccharin as an added sweetener in non-insulin-depedent diabetes: short- and medium-term metabolic effects (Cooper et al., 1988)
“No significant treatment effects were observed on fasting concentrations of blood glucose, plasma insulin or serum triglycerides, or on urinary excretion of glucose, sodium or potassium. Following a standard breakfast with either sucrose or saccharin and starch, no differences between meal responses were observed.”