Dark chocolate could improve memory by 25%, but you’d have to eat 7 bars a day –PBS 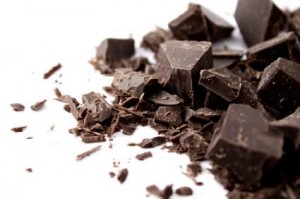 (that’d be a LOT of dark chocolate

Cerebral blood volume (CBV) of this particular area of the brain declines with age and is lower in cognitively impaired: 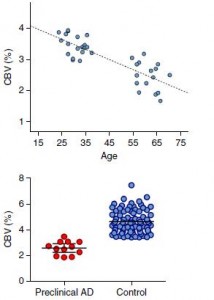 …and it responds to dark chocolate (flavanols) (in most people): 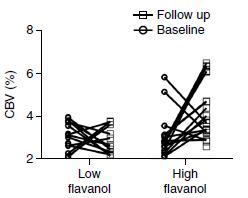 …and this was associated with improved performance in a cognitive task: 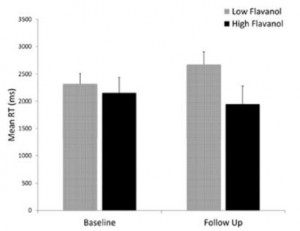 Admittedly, the effect was small and of borderline statistical significance, and it’d be really hard (ie, fattening) to do with whole foods (ie, dark chocolate), but maybe if you’re in it for the long haul, dark chocolate might truly have this effect.  And there’s a plausible mechanism: many studies show that smaller doses improve blood flow; if this carried over to critical brain regions, then very plausible.  I’m hedging my bets on: lower dose, much longer duration.

However, maybe such a high dose of flavanols isn’t even necessary if we just eat dark chocolate instead of flavanol supps: Theobromine enhances absorption of cacao polyphenol in rats (Yamamoto et al., 2014).  This is similar to resveratrol

; other compounds in red wine have been shown to increase it’s bioavailability, so maybe you don’t need to drink eleventy billion glasses to get all the benefits seen in the epic rodent studies. 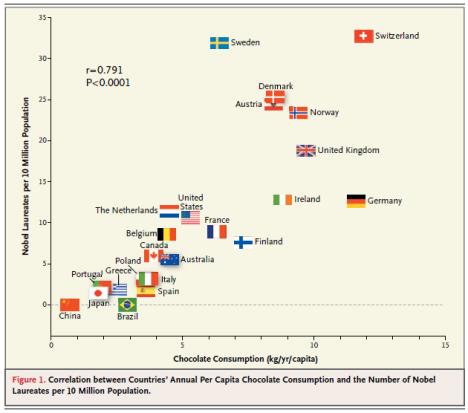 ^^^nobody really believes this

“We surveyed 23 male winners of the Nobel prize in physics, chemistry, physiology or medicine, and economics. Ten (43%) reported eating chocolate more than twice a week, compared with only 25% of 237 well-educated age- and sex-matched controls. Three proffered that their chocolate consumption had indeed contributed to their Nobel prize, but most disavowed any link. Two attested that they had won the prize in spite of their chocolate habits.” 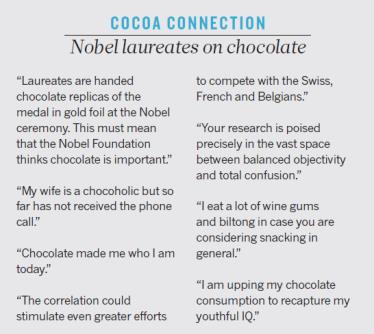 Part 3.  While we can be hopeful, I don’t think dark chocolate’s strongest effect is on brain power.

Chocolate and the brain: neurobiological impact of cocoa flavanols on cognition and behavior (Sokolov et al., 2013)

I don’t particularly care for flavanols, which is why I don’t care if my dark chocolate has been Dutched or not.  That said, they’re not all that bad: Flavan-3-ol fraction from cocoa powder promotes mitochondrial biogenesis in skeletal muscle in mice (Watanabe et al., 2014).

Dark chocolate is also good for the microbiome.

.  We don’t live in a mythical organic GMO-free world; if we did, I might say eat all the PUFAs you want.  However, we live in a toxic environment, consistently exposed to all manner of pollutants, etc.  Saturated fatty acids protect cellular membranes.  They should not be avoided.  And, dark chocolate

maybe it’ll make you smarter, too

16 responses to “Because chocolate”