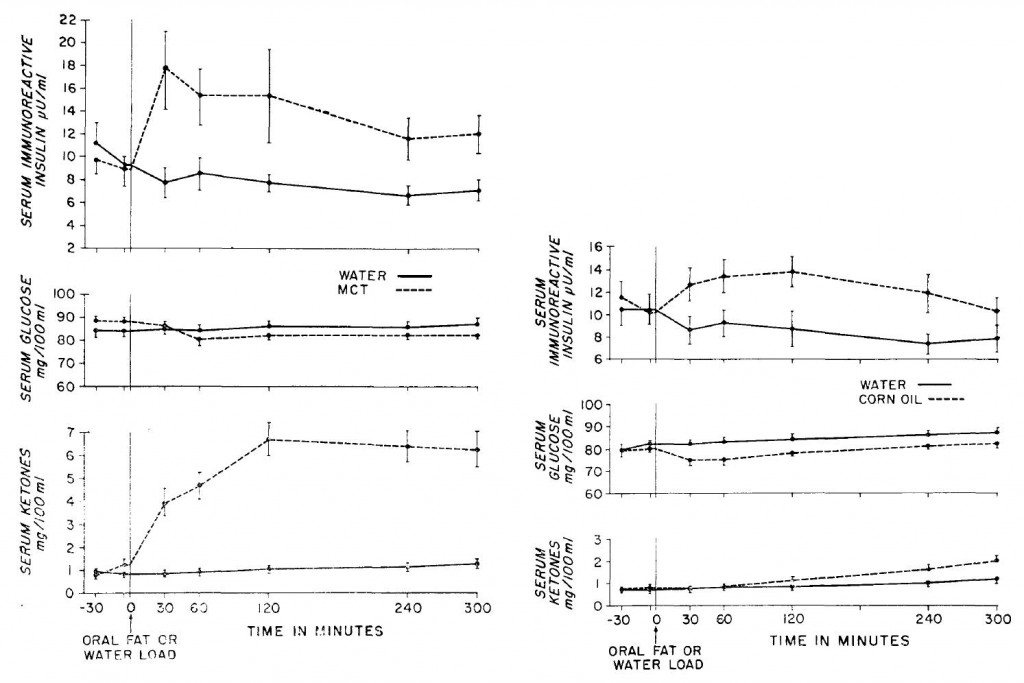 In this experiment, they gave about half as much MCTs

as Pi-Sunyer and saw no insulin response in healthy subjects but a doubling of insulin in cirrhotics; still, however, this wasn’t enough to budge blood glucose.  Note that after 100 grams of glucose, insulin increased 6-7x.  That’ll leave a mark.

The coingestion of fat on the glucose, insulin, and GIP responses to carbohydrate and protein. (Collier and O’Dea, 1983)

Simple enough: healthy young subjects fed a boiled potato or veal, with or without butter 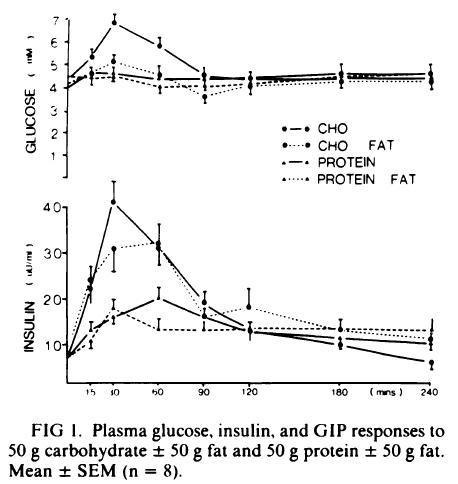 Most of the correlation was attributable to body weight, but even after controlling for a variety of potential confounders, there was still a relationship between dietary fat and fasting insulin (but not fed insulin).

When in positive energy balance, excess dietary fat is insulinogenic in obese people, but carbohydrate overfeeding is still way more insulinogenic (in everyone).

Keto-warrior dieters, 1-meal-per-day, etc. (unless you’re losing weight): insulin.  Even if it’s 100% fat, there will be some insulin secreted (Pi-Sunyer).  Probably enough to inhibit lipolysis, but not much else.  If you’re lean or losing weight, and eating a few LC meals throughout day, insulin levels will remain low (Horton).

Fat blunts the insulin response to meals; even if the additional calories aren’t accounted for.  In the Collier study, 50 grams of carbs (200 kcal) induced more insulin than 50 grams carbs + 50 grams fat (650 kcal).

If energy surplus and overweight (or post-obese, as per Jane’s analysis [I think]), then it’s also likely that higher fat –> higher fasting insulin (Mayer & Horton).

If you’re in relative energy balance, and not ingesting 2000 Calories all at once, then the old rules apply: low carb = low insulin (Sharman).

LCHF works well in obesity primarily because of the spontaneous reduction in food intake; insulin levels and body fat decline.