Implications of the circadian nature of ketones.

Ketosis.  Happens during starvation and also by restricting carbohydrates (and protein, to a lesser degree)… might be important for epilepsy and bipolar disorder, too. 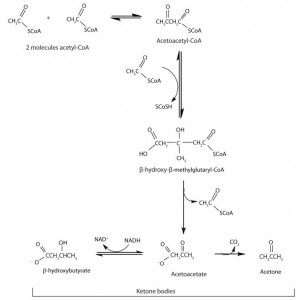 measure urinary acetoacetate (AcAc) and reflect the degree of ketosis in the blood probably about 2-4 hours ago.  Blood ketone meters

measure beta-hydroxybutyrate (bHB) right now.  bHB fluctuates to a greater degree, eg, it plummets after a meal whereas AcAc takes longer to decline.  AcAc/bHB is usually around 1, but increases after a meal (Mori et al., 1990): 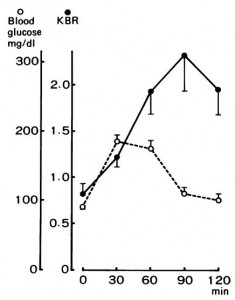 Whether it is Jane Plain’s pee, or Jimmy & Freda’s blood, ketosis register strongest at night.  Why? 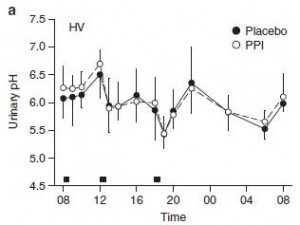 Urinary acidity increases in the evening, which should favor false negatives on the ketostix.  Urine is more dilute in the evenings which also favors lower ketone readings… but this doesn’t happen; confirmed by blood testing.

And in rats fed a ketogenic diet: bHB is elevated after they’ve been eating all night; similar to humans who have been eating keto all day (closed squares, solid line) (De Gasquet 1977): 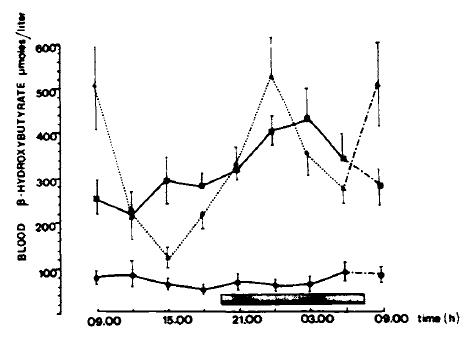 PM ketones are likely higher because of the convergence of a few “normal” biological events. 1) Adipose-derived FFAs are not as robust of a delivery mechanism as keto-buffet in stimulating ketogenesis.  2) Exercise is a known ketogenic stimulus.  Daily activity is a weak substitute for “exercise,” but in combination with a ketogenic diet, it’s enough to contribute to the blood ketone pool.  3) Higher levels of sympathetic nervous system activity during the day promotes both lipolysis and ketogenesis.  None of these could single-handedly explain circadian ketosis; rather, each plays a small role explaining the day-long accumulation of ketone bodies in the blood.  When asleep, they cease, fewer ketones are produced, and those present are slowly cleared.  Rinse, wash, repeat.

Knowing this might be important (referring to the circadian aspect, not the “how”).

I.  The ketogenic diet is a bona fide treatment option for certain types of epilepsy.  Some epileptics exhibit more frequent seizures in the morning: temporal lobe epilepsy in these two studies: De Paolis 2013, Cuppens 2009; frontal lobe epilepsy in this study: Pavlova 2012.  There many instances of distinct circadian patterns in seizure frequency… if there is a consensus, I missed it (admittedly, I didn’t look very hard).  The point is there are some epileptics are more clinically responsive to ketogenic diets:
Efficacy of the ketogenic diet: which epilepsies respond? (Thammongkol et al., 2012)
Is the ketogenic diet effective in specific epilepsy syndromes? (Nangia et al., 2012)
Can we predict a favourable response to Ketogenic Diet Therapies for drug-resistant epilepsy? (Schoeler et al., 2013)

Importantly, there appears to be an interaction between the circadian nature of ketones & seizure frequency, and possibly which forms of epilepsy are most responsive to ketosis.  I’m proposing that some epileptic patients on a ketogenic diet experience fewer seizures at night because of the higher ketones.  Alternatively, other patients on a ketogenic diet might not benefit as much because their fits tend to occur in the morning… a speculative corollary of this is that boosting AM ketones would be helpful in this subgroup.

This is an n=2 study, but showed a remarkable effect… and duration was 2-3 years (stick this one in your file titled: “ketogenic diet: long-term safety”).

There also appears to be a subgroup of depressives who exhibit strong diurnal fluctuations in mood.  For example, children in this study were hypomanic at night but went to the doctor in the morning when they were more “depressed.”  (Hopefully, shrinks are taking detailed patient histories and interviewing parents, etc., in order to detect this type of thing.)  And it’s not uncommon for other depressives to exhibit greater feelings of melancholia or negative affect in the morning relative to evening… I’m proposing that similar to epilepsy, certain symptoms of bipolar disorder might manifest in the morning because of low ketones; alternatively, who stands most to benefit from a ketogenic diet… and same speculative corollary as above. 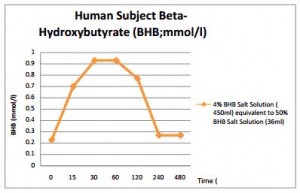 Patrick Arnold might just have a new market for his “KetoForce” product.  A spoonful of instant ketosis might put a dent in melancholia.  And seizures.