“Dietary protein-derived amino acids have a purpose, and that purpose is not carbs.”

At a reasonable level of dietary intake, protein is used for the maintenance of organs & tissues.  Lean body mass.  It’s functional.  Protein isn’t stored in any appreciable capacity, and most excess is either oxidized or stored as glycogen.  Theoretically, about 50-60% of protein-derived amino acids can be converted into glucose, mathematically, but it’s not what you think…

“At a reasonable level of dietary intake.”  A recent publication took a look at this (Fromentin et al., 2013).   They set out to determine how much protein is converted to glucose under “optimal gluconeogenic conditions.”  That is, the subjects were 12 hours fasted, which is a physiologically relevant, optimal gluconeogenic

condition.  They were then given 4 eggs (~23 g protein) that were labeled with two stable isotopes (15N & 13C, derived from hens fed isotope-enriched diets!).  Throughout the entire study duration, the subjects were infused with a third isotope, 2H-glucose.  By collecting and analyzing the enrichment of isotopically-labeled metabolites like expired CO2, urea, and glucose, the researchers were able to determine the fate of those 23 grams of protein.

Some of the dietary protein-derived amino acids were used for protein synthesis, others were oxidized.  But blood glucose levels did not change.  Nor did the rate of gluconeogenesis.

Over the course of 8 hours, their livers cranked out ~50 grams of glucose, and about 4 of it came from the protein.  8% of the blood glucose produced under “optimal gluconeogenic conditions” came from dietary protein.  8%.  And it wasn’t enough to elevate blood glucose levels.

It could be argued that since only about a third of liver glucose production after an overnight fast comes from gluconeogenesis (the rest from glycogenolysis), 25% of the gluconeogenesis-derived glucose came from dietary protein.  My response: it still doesn’t matter because blood glucose levels didn’t change!

Do you even lift, bro?

Thank you, Conn and Newburgh, for doing this study prior to the existence of Institutional Review Boards (1936).  Best. Study. Ever.  They were going off of the hypothesis that half of dietary protein can be turned into glucose and this should cause profound hyperglycemia if they were to give something ridiculous like 160 grams of protein… right?  …because that would be the same as 80 grams as glucose.  In the figure below, line #1 is blood glucose after 80 grams of glucose.  Line #2 is 160 grams of protein (theoretically equivalent to 80 grams of glucose). 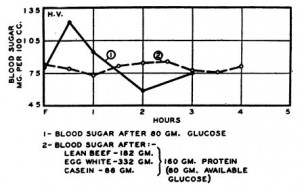 They repeated this ad nauseum, with a variety of different sources of carbohydrate and protein (up to 1.3 pounds of lean beef in one experiment!), but the picture didn’t change.

What if your metabolism is “broken?”  Type 2 diabetic patients from Gannon 2001 given a half a pound of steak (~50 grams of protein)  (closed circles) or water (open circles) first thing in the morning: 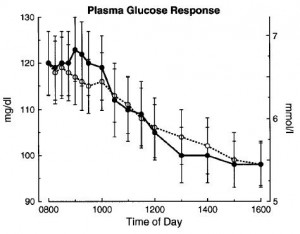 Blood glucose levels decline in the water-only group because they’re essentially fasting all day until 4 pm.  Similarly, blood glucose levels decline in the 50 grams of protein group because dietary protein DOES NOT CAUSE HYPERGLYCEMIA (might get a small non-significant bump when compared to water ingestion, but no red flags).  Glucagon was secreted but the rate of gluconeogenesis did not change.

If this surprises you, then you’re barking up the wrong tree.  About 2 grams of the blood glucose produced over 8 hours came from those initial 50 grams of protein.  This is considerably less than in healthy people (see above), and still far less than the theorized 50%.

is safe and even beneficial for diabetics… for ketogenic dieters trying to maintain a certain level of ketosis, it’s a gray area, ymmv…  Please do not confuse the two and recommend a type 2 diabetic to reduce their protein intake (especially without knowing their baseline intake!).  There are no studies to support such a recommendation and it will likely do more harm than good.  Maintenance of lean body mass is more important then deep ketosis for type 2 diabetics.  They are carbohydrate-intolerant, not protein-intolerant.  Brain fog is another issue entirely and is not in the same ballpark as diabetic hyperglycemia… and as evidenced above, dietary protein does not cause hyperglycemia.  In anyone.  Even if they eat a pound of steak.

?  Dietary protein and/or amino acids are necessary and essential for survival <– fact.  When taken in excess, some are stored as glycogen, some are oxidized.  Ketosis relies on a need for “fat-derived fuels.”  If liver glycogen is full, then some of that glycogen reduces the need for said fuels.  Further, ketones are derived from hepatic fatty acid oxidation; if liver is getting plenty of energy from oxidizing amino acids, it certainly won’t need any from fat.  When it comes down to prioritization of hepatic substrate oxidation: big influx of diet-derived amino acids > fatty acids.  And insulin generally helps to prevent a head-on collision.

Dietary protein-derived amino acids have a purpose, and that purpose is not carbs.

If you like what I do and want to support it, head over to Patreon! Full access for a measly five bucks a month and there are many other options. It’s ad-free and you can cancel if it sucks 🙂