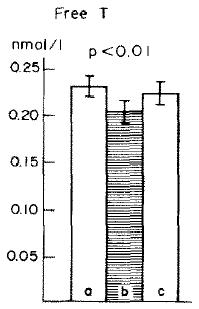 Off-topic (just came across this and felt like sharing): Effects of replacing meat with soyabean in the diet on sex hormone concentrations in healthy adult males (Habito et al., 2000)

42 healthy men aged 35-62 ate either 150 g meat or an equivalent amount of protein from tofu daily for 4 weeks, 2 week washout, then crossover.

moving on: Body composition and hormonal responses to a carbohydrate-restricted diet (Volek

In PCOS, hyperinsulinemia screws up GnRH secretion resulting in an exaggerated LH:FSH response… this increases ovarian androgen production, hirsutism.  Men don’t have ovaries, and at least one study showed LH isn’t *directly* affected by insulin [in men] (Pesant et al., 2013)… (although this doesn’t rule out subtle changes in LH pulsatility or some other rarely measured parameter).

I suspect part of the effect [in men] is mediated by aromatase.  The gyno might be permanent, but the loss of libido doesn’t have to be.

Cause or effect?  The diet stuff (above) suggests diet-induced hormonal alterations are a part of the cause.  Of course, it seems to work both ways: androgen deprivation therapy *causes* insulin resistance (Haidar 2007).  Imho, however, in practice, diet should be at least considered because it’s an easy remedy: eat better.

@CaloriesProper @IanLane88 in a way e and t are opposite neg feedback regulators in men and women. They are byproduct of steroidogenesis.