“Dietary protein has a purpose, and that purpose is not carbs.”  Nor is it to break ketosis or stall weight loss.

Drastically increasing protein intake may reduce the degree of ketosis in the context of a large energy surplus, but this is likely due more specifically to the large energy surplus than the protein.  This would explain why Warrior dieters (1 meal meal per day) often report reduced ketones if they eat too much protein.  It’s more likely that the 2000 kcal bolus is exerting it’s anti-ketotic effect by being a large energy surplus, such that anything other than 90% fat would blunt ketosis.  It’s not the proteins… Want proof?  Here’s an n=1 to try: give up Warrior dieting for a few days and try 3 squares.  My bet is that you’ll be able to increase protein intake and still register ketones as high or higher than before.  There are data to support this and reasons why it may not matter (below).

disclaimer: I don’t think “deep ketosis” is necessary to reap the benefits of carbohydrate-restriction.  But if you love high ketone meter readings, then this might be a better strategy to maintain deep ketosis while getting adequate protein. win-win.

All of the studies below are confounded one way or another, but so are we humans.

Negative energy balance promotes ketosis even with relatively high protein intake.  Phinney showed this in obese patients in 1980.  He fed them a very low calorie diet for 6 weeks; 50% of the calories came from protein, the rest fat.  This amounted to ~76 g/d or ~1.2 g/kg of their “ideal body weight.”  It was, however, a rather severe caloric restriction. 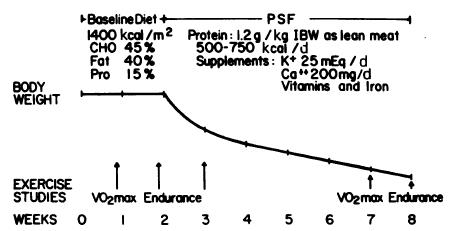 They lost ~22 pounds; two-thirds of it was fat mass.  Muscle glycogen plummeted from 1.53 to 1.04 mg/100 g… and further testing confirmed they were ketoadapted: glycogen wasn’t used during an endurance exercise test and performance was unhindered <– that is the essence of ketoadaptation

RQ after exercise was 0.76 on the high carb diet and 0.66 after keto <– that is the proof of ketoadaptation

.  They were oxidizing 110% fat (& fat-derived fuels) and it was working just as good as glycogen… or better: time to exhaustion increased from 168 minutes to 249 minutes.  VO2max also increased, albeit slightly (and only relative to LBM), from 43.6 to 48.8 mg/kg LBM*min.

All of this despite getting ~50% of their calories from protein… one could speculate that these beneficial effects might have been at least partially attributed to getting adequate protein (although I’d say 76 grams is still too low for such a large caloric restriction).

Prior to ketogenic dieting, beta-hydroxybutyrate (bHB) levels were negligible ~0.06 mM.  Exercise promotes ketosis even in weight-stable carboholics.  In this case, exercise increased bHB to 0.71 mM.

After exercise, bHB increased to 4.17 mM.

The point is that high protein won’t “knock you out of ketosis” if you’re losing weight.  2.73 mM is a fairly deep level of ketosis, and this was while they were getting half of their calories from protein… 76 g/d in this case.  For those concerned about glucose control: fasting glucose declined from 89.2 to 70 mg/dL and insulin from 7.5 to 3.2 uU/mL.  For what it’s worth, I don’t think their progress would’ve been better if protein was lower.  In fact, I think it would’ve been worse (ie, more of their weight loss would’ve been lean body mass).

This study was followed-up by one where patients were not losing weight (Phinney 1983).  Weight loss was not a confounding factor in this study, and they even ate MORE protein.  To be clear, this is theoretically two cards stacked against ketosis.  They were eating ~3140 kcals, 129 grams of protein (1.75 g/kg!!) and about 293 grams of fat.

*another disclaimer: I prefer to think about protein in terms of grams rather than percent of calories.  It just makes more sense that way [to me].  So 129 grams is more than 76 grams despite it being only 16% of the calories, compared to 50%.  Also of note, higher calorie intake reduces protein requirements, so 129 grams is much higher than 76 (in this context).

On 129 grams of protein per day… and not losing weight (by design).  The key = less than 20 grams of carbs per day.  The lesson = high protein intake doesn’t erode glucose control or kill ketones in the context of carbohydrate-restriction.  Furthermore, ketogenic diets induce satiety and rapid weight loss, but that was controlled in this study.  The subjects were fed enough calories to maintain a stable body weight… so yeah, they probably had to eat more than they wanted.

Importantly, both of the aforementioned studies were in ketoadapted subjects.  They had been on the diet for longer than 3 weeks.  BUT ketoadaptation

as subjects in the latter study had ketones greater than 2 mM after the first week, despite protein at 1.75 g/kg, 129 grams/d.

The above studies show that protein doesn’t kill ketones.  But even if you think you’re an n=1 in whom it does… does it matter?  Ie, is “deep ketosis” necessary?  Coleman and colleagues (2005) didn’t attempt to test this directly, but they kind-of-did.  Overweight women were recruited and instructed in the classical Atkins method.  That is, less than 20 grams of carbs with “liberal intake of dietary protein and fat” for the first 2 weeks, then increasing carbs by 5 g/wk until weight goals were achieved.  As per usual, energy intake spontaneously declined by almost 700 kcal/d the first week.  Their protein intake increased from 76 to 103 grams/d.  Appetite spontaneously declined while protein intake increased <– let that sink in (even though it’s confounded).

Protein intake declined from 103 grams to 92 grams from weeks 2 through 12 and so did ketones!  Lower protein –> lower ketones.

Ketones were getting lower and lower but weight loss was proceeding uninterrupted.  They weighed 187 pounds at baseline, 176 at week 6, and 170 at week 12.

My point?  Carbohydrate restriction is a more important variable.  Higher protein intake doesn’t kill ketones, as evidenced by Phinney 1983 and Coleman 2005, nor does it hinder weight loss on low carbohydrate diets, as evidenced by Phinney 1980 and Coleman 2005.  The women in Coleman’s study were eating ad libitum and there was no correlation between weight loss and ketones.  Protein intake went up and body weight went down.