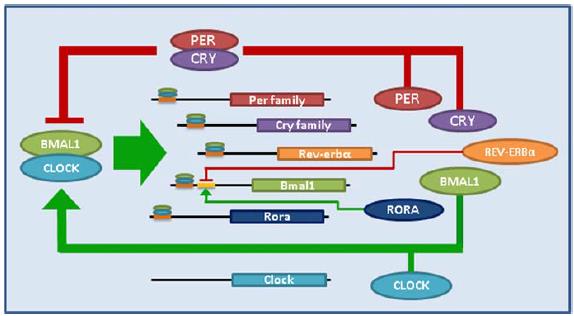 It would take further analyses of beta-cell function or a hyperinsulinemic-euglycemic clamp to know for sure, but this suggests these mice can’t shut down hepatic glucose production after a bolus dietary carbs (if beta cell function is normal), and they can’t increase hepatic glucose production when jabbed with insulin.  Bmal1, in a broad sense, may be necessary for “euglycemia.”

Another interesting phenotype of these mice is complete ablation of circadian activity patterns – it’s like they sleep walk and frequently nap (McDearmon et al., 2006).  And not surprisingly, this doesn’t bode well – lifespan is significantly reduced; only about 30% are still alive after a year, compared to 100% of normal mice.  No bueno.

Mice that lack Bmal1 selectively in liver exhibit virtually none of these effects, suggesting Bmal1 is important, just not in liver…? with the exception that these mice tend to be slightly hypoglycemic, so perhaps liver Bmal1 is a positive regulator of hepatic glucose production – this could explain the apparently improved insulin sensitivity – which would imply a pancreatic or skeletal muscle defect to explain the impaired glucose tolerance.

If the same experiment is done but Bmal1 is rescued in muscle instead of brain, body weight and total activity is normalized, still no circadian activity; however, the lifespan is restored.

The observation that neither of these transgenic models could recover circadian activity suggests Bmal1 somewhere other than brain and muscle is responsible for this phenotype (I think).

As mentioned above, Clock and Bmal1 are considered ‘positive’ regulators of circadian gene expression; deletion of either in liver drives a tendency toward hypoglycemia.  Deletion of a negative regulator, Cry, does the opposite (Ramsey and Bass, 2011).  It doesn’t always work out this way, but it’s much easier when it does.

here’s where it starts to get interesting

Deletion of Bmal1 in adipose disrupts circadian feeding patterns, induces obesity, and improves the efficiency of physical activity.  That is, they burn fewer calories to do the same amount of work, similar to the weight-reduced state (Paschos et al., 2012). 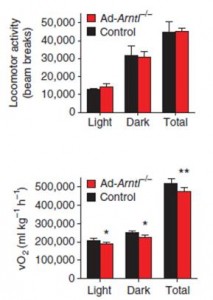 Admittedly, some of these experiments are, well, not entirely straight forward; eg, one way to assess “depression” in mice is to drop ‘em into a bucket of water and see how long it takes until they realize they float.  Technically, when they stop swimming, some researchers think this reflects helplessness or “despair;” and depressed mice “give up” sooner.  The Clock knockouts just kept on truckin’.    And they spent waaay more time in the center of an open field – theoretically indicative of less anxiety.  (the meaning of these experiments are highly debated; they definitely measure something, it’s just not exactly clear what.)

Since these mice only seem to exhibit the manic side of bipolar, it would be interesting to see how altering the light-dark cycle would effect them – say, for example, dimming the lights…  this might at least help to normalize their enhanced dopaminergic activity.

Oddly enough, deletion of Clock specifically in one part of the brain (midbrain VTA neurons – of the notorious dopamine reward pathway

), mimics the manic phenotype of global Clock deletion, but also induces depressive-like behaviors (Mukherjee et al., 2010)… I think this means that VTA Clock is anti-manic and anti-depressant; and Clock somewhere else is more depressant… however, i’m a little unclear about this part.

Circadian dysregulation in the amygdala or HPA axis may play a role in mediating the depressive aspect, although no clever mouse experiments have been done to tease this out [yet].  Maybe Jane Plain can weigh in here…