One group of researchers sought evidence of plant consumption on, as mentioned above, [cooking/eating] tools and dental remains ranging from an estimated 10,000 to 130,000 years ago (Henry et al., 2014).  More specifically, they were looking for phytoliths (evidence of grasses) and starch granules, and they found significantly less of the former.  This led them to conclude that the starch granules likely came from ingesting starch-containing plants directly, rather than from the stomach contents of an herbivore.  If the latter were true, they would’ve found more phytoliths because “herbivores consume large quantities of phytolith-rich grasses.”  Based on certain physical characteristics of the starch granules and their knowledge of what grew in the area, the authors speculated that the starch granules came from plants of the waterlily family, possibly some grass seeds,  and a few others. 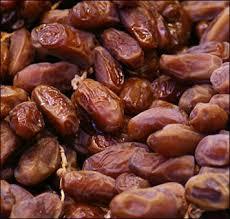 @CaloriesProper It almost feels like some want to go “See! H&G’s did eat plants! Therefore Wheaties are back on!” — Jamie Scott (@_Jamie_Scott) July 2, 2014

No, this doesn’t mean Wheaties are back on!

While such a study isn’t capable of determining how much plants contributed to the diet, the authors concluded: “Our results indicate that Middle Paleolithic Neanderthals probably consumed as many plant species as modern humans did.”  The phrase “as many plant species” doesn’t indicate how much, but rather how many different types of plants.  Qualitative, not quantitative.

Another study sought evidence of plant ingestion by analyzing fecal remains found in Spain, circa 50,000 years ago (Sistiaga et al., 2014).  They compared metabolites of cholesterol (from animal foods) to those of phytosterols (from plant foods), on a more quantitative level.  Their results showed that while the majority of the diet was likely animal-based in this population, vegetation was not absent, suggesting omnivory as opposed to plant avoidance or frank carnivory.

Lastly, this study focused on the diets of modern hunter-gatherer societies, and showed that when honey

is present, seasonally and geographically, it comprises a relatively large proportion of the diet (Marlowe et al., 2014).  For example, during the rainy season in the Congo, the Mbuti get up to 80% of their calories from honey.

And in Tanzania, seasonal honey harvesting by the Hadza is proportional to the amount of rainfall: 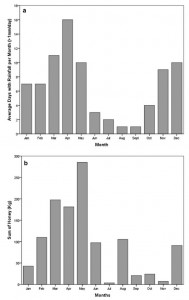 The rainy season is a time when hunting is less productive and honey is most available.  Thus, honey fills an [essential] energetic void… just not 365 days a year.

Given that these groups are still around today, the researchers were able to estimate the relative contribution of various foods to the overall calories (at one point in time): 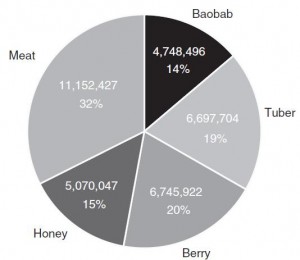 Conclusion of part 1: there may have been certain times of the year in specific places on Earth when the diet was meat-based, I won’t deny this, but an increasing amount of evidence suggests omnivory predominated.

Are we carnivores that should avoid plants because they’re harmful? 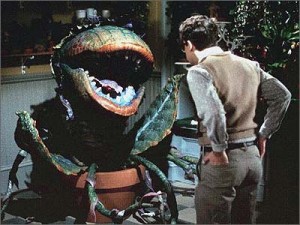 Diets of modern hunter-gatherers vary substantially in their carbohydrate content depending on ecoenvironments: results from an ethnographic analysis (Strohle and Hahn, 2011)

You’ll see in the blogosphere that most bloggers have the gist of it – there’s no concrete proof that plants [or meat] is absolutely necessary in the diet… this is nutritional sciences; that’s the nature of the beast.  For someone who thinks metabolic syndrome is best treated with a low-fat calorie-restricted diet, I doubt any of my blog posts have changed their opinion… I feel similarly about this issue.

Given my personal bias (which is moar animal protein btw), I feel dirty admitting this, but based strictly on the literature (assuming the bar isn’t set ridiculously low), there are many more studies demonstrating the safety of meat-avoidance (vegetarianism) than that of plant-avoidance (carnivory).

The longest (and one of the only) decent study on human carnivory I know of is Stefansson and Andersen.  N=2.  They didn’t get scurvy! #winning?

My take: vegetarianism and carnivory are not ‘hedged bets.’  Do you *need* to eat meat or plants?  Obviously, you need to eat foods from at least one of the groups.  But, need =/= optimization.

adding meat to a vegetarian diet = adding plants to a carnivorous diet ?

Speculation: potential consequences of micronutrient insufficiencies and/or imbalances?  maintenance of an elevated level of body fat (role for leptin signaling?) …skeletal muscle protein synthesis and turnover are expensive processes, involving many enzymes and their requisite [micronutrient] cofactors…  also, GI problems, mood disorders, etc., etc… maybe I’m over thinking it, but, well, that’s what I do. 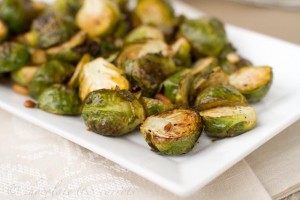 Does eating ‘nose-to-tail’ cover all your bases?  Place your bets!  it may have worked for S&A, but scientific support for this is sorely lacking.  Incorporating a variety of plants, cooked & raw, into your diet doesn’t make it a high carb diet! …the few carbs in the plants mentioned above are largely fibre.

.  By that I mean, besides being real food, low in net carbs, and very nutrient-dense, they don’t hijack your appetite.  In one study, participants were instructed to add 43 grams (a little under 2 ounces) of almonds to their diet (Tan and Mattes, 2013).  This should’ve added about 250 Calories to their total food intake, but the results showed that the calories were completely compensated for, and in some cases, even more so.  That is, they participants spontaneously ate less [other stuff]:

Are these foods healthy because they displace something worse?  That might be the case for switching from regular soda to diet – wherein almost anything that replaces the calories is an improvement. 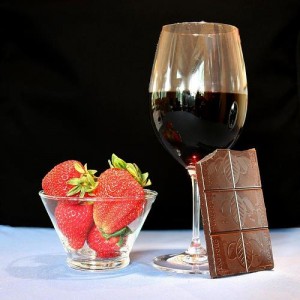 And anyway, carnivory excludes coffee, dark chocolate, and red wine.  If that’s paleo, count me out.

For full access to all new articles (or if you just like what I do and want to support it), head over to Patreon! Five bucks a month gets you in and there are many other options. It’s ad-free and you can cancel if it sucks 🙂

This just in: It is now considered safe for humans to consume plants. STOP THE PRESSES! http://t.co/LJ7APkEYN1