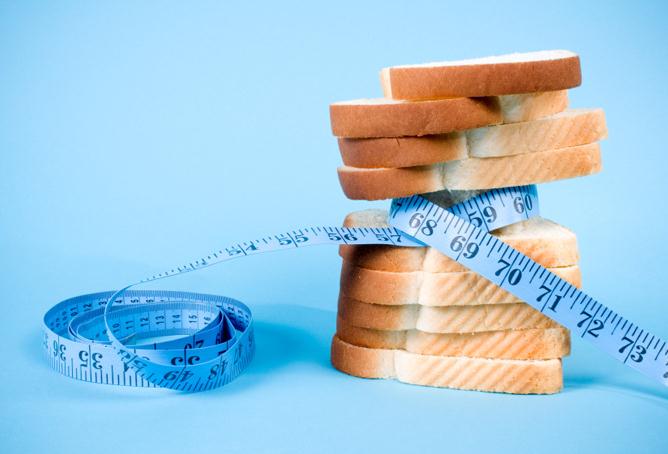 A three-way crossover study!  Excellent study design.  In brief, the participants lost 30 pounds in 12 weeks on a pseudo-Zone diet

To put the issue to bed before it is even raised, the volunteers were given professionally prepared food for about half a year and paid ~$2,500 if they stuck to the plan.  They STUCK to the plan. 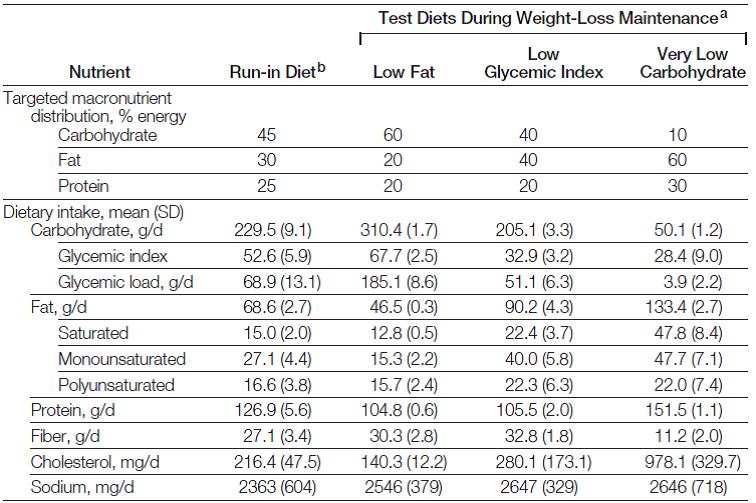 The major outcome measurements dealt with energy expenditure, with the premise being that preservation of metabolic rate after weight loss should improve “weight-loss maintenance.”

Resting energy expenditure (REE) is measured by indirect calorimetry.  It’s the amount of calories that a total couch potato would burn daily and is usually determined by body composition (more muscle = higher REE).  While body composition was similar in each group, REE was modestly higher in subjects on the low carb diet.

Total energy expenditure (TEE) is exactly what its name implies.  It’s the total amount of calories you burn in a day.  If your body weight is stable, then this is also approximately how many calories you’re eating.  This result is actually pretty interesting.  TEE on the low carb diet was over 300 kcal higher relative to the low fat diet.  This is probably at least partially due to the higher protein content of the diet (30% vs. 20% of total calories or 150 vs. 100 grams per day).  TEE of the intermediate low GI diet was in between low fat and low carb diets (2937 kcal/d), so TEE increased as carb intake declined and fat intake increased across all 3 diet groups.  Follow the blue boxes in the figure below to see the averages, and since this was a THREE-WAY CROSSOVER (!), you can follow the lines to see how each person fared individually: 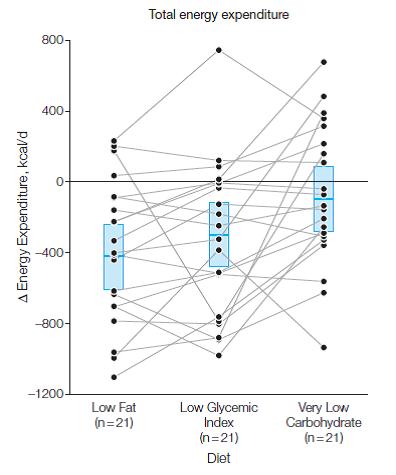 300 kcal is equivalent to an hour of exercise, yet subjects on low carb weren’t exercising more (although the slowly-losing-his-wits-Dr Bray suggested otherwise in an editorial, arguing that the increased TEE/REE ratio meant increased physical activity, despite the actual data, which showed if anything, slightly lower total and moderate-vigorous intensity physical activity in the low carb group).

Burning an additional 300 kcal per day is like losing over 2 pounds of fat per month by doing exactly nothing.  BUT

300 calories per day is a LOT of calories, why didn’t it impact weight loss?

This seemingly paradoxical conclusion suggests energy intake is the primary determinant of weight loss, independent of energy expenditure and diet composition.  It is either a violation of The Laws of Energy Balance, experimental error, or evidence of dark magic.

the authors were quick to note urinary cortisol (an anti-inflammatory and stress hormone) and CRP (a marker of systemic inflammation) were highest on low carb, and this could cause insulin resistance.  However, I’d note 2 things: 1) CRP declined in ALL groups relative to baseline, but the reduction was less in low carbers compared to the other groups; and 2) CRP was low and within the normal range in all subjects throughout the entire study. But most importantly, hepatic and peripheral insulin sensitivity improved most in low carbers, in whom CRP and cortisol was the highest.

Similar to the Jakubowicz study (dessert for breakfast), the Ebbeling study was interesting but not groundbreaking; nothing to write home about.  Both showed modest benefits for low carb over low fat.  The news media haven’t feasted on these studies yet, but when they do, however, I’m sure they’ll disagree.  “Weight-loss maintenance” is a riddle wrapped in a mystery inside an enigma, not a simple question to be elucidated by a mere 4-week diet study, even if it’s a three-way crossover.  even if it has dark magic.

If you’d like to consult with me, reach out: drlagakos@gmail.com.

Check out my Patreon campaign! Five bucks a month gets you full access and there are many other options. It’s ad-free and you can quit if it sucks 🙂

Affiliate links: Still looking for a pair of hot blue blockers? TrueDark is offering 10% off HEREand Spectra479 is offering 15% off HERE. If you have no idea what I’m talking about, read this then this.