Fructose vs. The Laws of Energy Balance

Exclusively from literature featured in past blog posts, e.g. HERE and HERE, excessive fructose consumption seriously deranges metabolism.  Furthermore, fructose pre-disposes to and exacerbates leptin resistance, which is one of the most proximal causes of obesity viz. overeating.  However, this doesn’t exonerate processed foods, modern grain-based diets, or trans-fats because they frequently co-exist.  Many popular breakfast cereals contain all three, and IMO a fructose-free breakfast cereal wouldn’t do much in the treatment and/or prevention of obesity.  Just eat better.  And we might even get “low-fructose” foods on grocery store shelves in the near future (but don’t hold your breath, food companies LOVE their fructose).

Metabolic responses to prolonged consumption of glucose- and fructose-sweetened beverages are not associated with postprandial or 24-h glucose and insulin excursions (Stanhope et al., 2011 American Journal of Clinical Nutrition)

These studies came out in a few separate publications, were ultra-high budget, and used very advanced techniques to quantify energy expenditure and body composition.  AND much care was taken to ensure the subjects were truly weight stable when appropriate (inpatients for two weeks in the beginning and end of the study so all of their food intake and anthropological measurements could be assessed accurately).  The experiment consisted of feeding subjects a sugar-sweetened beverage, either glucose or fructose, equivalent to 25% of their daily energy requirements.

During the inpatient portions, subjects were fed a standardized diet of 15% protein, 20% fat, and 55% carb:

Note the differences in GI & GL (bottom two rows).   Fructose has a negligible impact on glycemia because, well, it’s fructose (not glucose), and it doesn’t magically transform into glucose after ingestion.

When left to their own free will, the patients pretty much ate the same:

In general, after a period of adaptation, their intake of other foods should have declined by 25% to compensate for the additional calories from the sugar drinks, but sugar seems to hijack the appetite set point – first row in the table above; calories were 20-25% higher, almost the exact amount of calories in their sugar drinks – therefore all subjects gained a few pounds (1% of initial body weight) (and then they went back on good behavior when they were being observed in the metabolic ward): 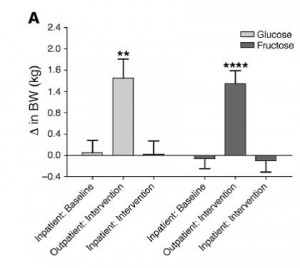 Herein we have the first unexpected pearl: the fructose group gained visceral fat (VAT) whereas the glucose group gained subcutaneous fat (SCAT) (eerily similar to what is seen with trans-fats!).

The glucose group actually gained slightly more fat mass than the fructose group, but most of the excess weight was deposited in the relatively inert SCAT, or “extraabdominal” regions.  The fructose group, on the other hand, gained it all in VAT (apple, not pear).  Abdominal fat and waist circumference increased significantly in the fructose drinkers.  FYI that is very interesting.  And it wasn’t caused by individual differences- it’s not like some people were more predisposed to gain more VAT than SCAT; these subjects were randomized.  Diet, or more specifically, dietary sugars caused this differential fat storage.  Amazing. 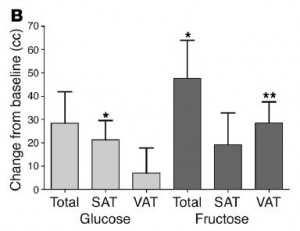 This figure shows the differences in fat gain.  The glucose group gained less VAT than SCAT, while the fructose group did the opposite.  Genetics had nothing to do with this.  It is diet.  It is nutrition.  For the love of God people, it is nutrition.

In lieu of the recent publication by Dr. Bray, it is interesting to note the second pearl: an example of the irrelevance of the laws of thermodynamics (universal) with respect to the Laws of Energy Balance (conjured up by yours truly).  Namely, energy expenditure is affected by the diet… IOW, the laws of thermodynamics are not violated, but all calories are not equal (THERE. I said it… on the record, in cyberspace, for all of eternity).

This nuance is introduced in figure 2:

And it did!  Both groups increased their sugar consumption (by design), and energy expenditure declined in both groups (they all gained weight).  The fructose group gained about a pound less than the glucose group, but consumed slightly fewer calories on average.  So the reduced fat oxidation didn’t enhance fat gain in the fructose group because food intake declined proportionately; and they maintained energy balance relative to the glucose group because energy expenditure was slightly lower (this is complicated).

To be clear, the fructose-induced VAT deposition is not explained by reduced fat oxidation as that would imply less fat gain overall, relative to the glucose group (which didn’t happen).

Fructose-induced VAT deposition is a product of the deranged nutrient partitioning caused by fructose itself.  It’s a dangerous lil’ bugger.  How does fructose conspire with the metabolic machinery to selectively enhance visceral adiposity?  Not sure, but it might have something to do with insulin.  Glucose but not fructose stimulates insulin secretion, and SCAT is more sensitive to the anti-lipolytic effects of insulin than VAT.  The overall fat gain was similar in both groups, in accord with the Laws of Energy Balance.   But insulin tends to drive fat into metabolically safer SCAT.  An example of this concept in practice can be seen by looking at obese insulin resistant people.  In this population, SCAT is less responsive to insulin, relativeto lean people, and indeed, they have significantly greater visceral fat mass.  So fructose doesn’t trigger an insulin response, which means excess calories are less likely to be stored in SCAT, but since this can’t violate the Laws of Energy Balance the calories must go somewhere…  deposited into the notorious VAT bank where they not only still make you fat but also initiate a storm of metabolic abnormalities.