how not to do a diet study.

As previously blogged about here, pair-feeding is an interesting phenomenon.

Basically, these researchers wanted to test the effects on body weight and glucose tolerance of soybean oil that was used for deep frying, like for French fries.  WRT diet and food intake, the study was well designed.  There were four diets: 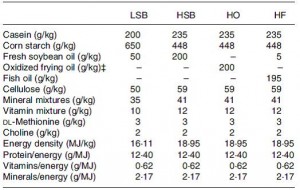 The “L” stands for “low,” as in Low SoyBean oil diet; this was the low fat control group.  The “H” stands for “high,” as in High SoyBean oil, High Oxidised oil, and High Fish oil.  Apparently, High Oxidised oil is not as delicious in rat chow as it is in French fries, so the rats fed HO ate considerably less.  But if the rats on HO ate less food, they would gain less weight and might exhibit improved glucose sensitivity compared to the other groups simply because of calorie restriction.  This would be a problematic confounding factor…

As seen below, the pair-feeding regimen was successful:

The row outlined in red shows food intake.  Note: it is very similar in all four groups; this was due to pair-feeding.

For the purpose of clarity, and since I’m not concerned with what was actually being tested, here is a simplified table.

In red, the HO group ingested 369 kJ/d, so the HSB and HF groups were fed approximately 369 kJ/d.  However, look at the markedly different amounts of weight gained.  HO gained significantly less weight than HSB and HF despite eating the same amount.  Similarly, HSB gained less weight than HF despite similar food intake.  don’t jump down my throat just yet, there was no attempt to quantify energy expenditure in any group, but that doesn’t take away from my point.  Taken at face value, these data suggest a diet high in oxidized soybean oil hinders fat gain (regardless of the mechanism).

The researchers figured that if all the groups were fed ad libitum (could eat as much as they pleased), HO would gain less fat because they ate less (as opposed to a specific effect of the dietary fat composition, which was the question they wanted to address).  This was their justification for pair-feeding.

Since HO gained less fat despite pair-feeding, their first point was proven.  Therefore, the researchers discarded the difficult and labor-intensive pair-feeding for experiment #2.  As seen below, rats fed HO ad lib do indeed ingest less than HSB.  AND they gain less weight.

So my question is: did pair-fed HSB rats gain more fat than HO because of an anti-fattening effect of HO, or because of the stress imposed by being pair-fed???  Normally, ad libitum feeding occurs all throughout the night (lots of small meals).  When an animal is pair-fed, they are given the food all at once and they gorge because: 1) they are being under-fed (given less than for what they are hungry); and 2) they don’t know when will be their next meal.

So back to my question: for what exactly does pair-feeding control?  in the first experiment, calories were the same, but HO were ingesting oxidized oils while HSB had a stressful feeding regimen… there are two variables.  The results from experiment #2 show nothing but what we’d expect, i.e., eat less = gain less fat.  My point is simple: pair-feeding might control for one problem but it introduces another.  If there are any nutrition researchers reading, please consider this.

Their experiments therefore specifically do NOT address the question they asked.  Maybe it was good enough for the British Journal of Nutrition, but it tells us nothing definitive about “the adipogenic effect of high oxidized frying oil.”

For ways around this, and to learn how to design a much better experiment, I am happy to consult for a small fee 🙂     for some more free background information, read on:

In this experiment, they fed young healthy men the following diet divided into one meal per day, 3 meals per day, or 9 meals per day.  Rodents feed all night long, so they would be most similar to the men being fed 9 times per day.  A pair-fed rodent, on the other hand, is fed only once and they eat everything in one sitting, just like the men in this study who were given all their calories at once.

The differences in blood glucose and free fatty acid responses to the meal were robust: 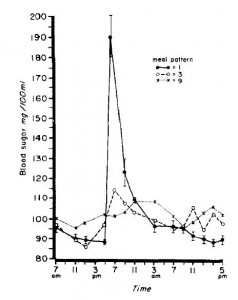 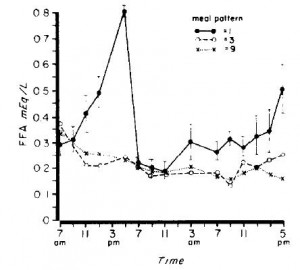 So in addition to the stress-inducing nature of being pair-fed, there are also profound physiological differences in nutrient handling which most likely contribute to differential fuel partitioning.

For more examples of how a restricted feeding regimen can go terribly wrong, see here and here.

When you consider the possibility that the act of pair-feeding can have distinct metabolic effects, independent from whatever intervention is being administered, the results become increasingly difficult to decipher.

But when looking at the metabolic profiles of these mice, things get somewhat complicated:

The other two rows are easier to interpret, as insulin and leptin in the TG/pair-fed group exhibited an intermediate phenotype between control and TG, suggesting they were partially mediated by downstream effects of the transgene (i.e., increased food intake or body weight).  In the conclusion of the paper, the authors aptly explain the changes in insulin and leptin but cleverly avoid the triglycerides.  In their favor, the depressed triglycerides could have been an artefact, but the possibility that they were a product of the pair-feeding per se cannot be ruled out.  So depending on the question being addressed, pair-feeding has the potential to royally screw things up.