“Examination of acute shifts in energy balance by selectively reducing calorie intake from one macronutrient.”

Intro (1/2): please don’t read this study with the media headlines in your mind.  Don’t even pay any attention to the study’s title, abstract, intro, and discussion.  In no way did this study put low carb proper on the chopping block, regardless of what you’ve seen online or elsewhere.  Mmmkay?

Intro (2/2): if you want a lesson (or refresher) in Advanced Nutrition, check out the Supplemental Information: in formulating his mathematical models, Dr. Hall seemingly reviewed every single biochemical pathway and physiological variable ever invented.  Read it, for science.  Really.

(that’s a ridiculous conclusion).  But it was pretty cool, and probably included the most accurate and comprehensive assessment of energy balance EVER.

Outline: baseline diet for a few days, than randomized to either Low Fat or Low Carb for 6 days.  Washout, then Crossover.  All in a Metabolic Ward.

Please stop complaining about the composition of the intervention diets!  they weren’t designed to mimic a proper low fat or ketogenic diet. They were designed with a very specific goal in mind: to selectively reduce the calories from ONE macronutrient without increasing any others, so that any effects could be attributed to the selective reduction of said calories.  Other studies compensate, for example, but swapping carbs & fat, but instead this study left us with a 30% caloric deficit.  Which is fine.

Theoretically, they could’ve tested as little as zero carbs on the Low Carb diet, but they were limited by how much they could decrease the fat, and you can’t get much lower than 17 grams of fat/d.  THAT IS WHAT SET THE BOUNDARIES FOR STEP 2 –>

There are 2 limits that step 1 put in place (which is really just 2 different ways of saying the same thing): 1) 30% energy restriction from ONE macronutrient; and 2) ~828 kcals that need to be disposed of.

PROTEIN AND CALORIES WERE HELD CONSTANT.

Why not zero carb?  Because 350 grams of carbs = 1400 kcals, and you can’t possibly reduce fat kcals by that much because there were only 981 fat kcals to begin with.  If they did go lower carb, protein would’ve had to decline in the Low Fat group to keep the diets isocaloric… and that would’ve been a MAJOR confounder. 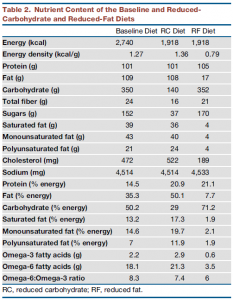 Energy expenditure declined in both groups (as expected), slightly more so in low carbers.  After 6 days.  Ebbeling showed that this is reversed by 4 weeks, or approximately enough time to adapt to the new fueling scenario.

The changes in body composition are not worth mentioning, but have a look if you’d like:

-17g fat/d is impossibly low fat (8% of calories).
I agree, but whatevs! my stance is that regardless of how the authors & journalists spin it, this study wasn’t designed to test real life diets.  Ad libitum (ie, real life diets) is completely different from rigorously controlling every calorie that goes down your pie hole in a Metabolic Ward.
Full stop.

-This study was comparing super low fat to modestly low carb.
Again, I don’t care [in the context of this study design]!  This was the only way they could do it, mathematically… so if this is your criticism, I think you’re targeting either the authors or journalists, not the actual study  –> better title may have been: “Examination of acute shifts in energy balance by selectively reducing calorie intake from one macronutrient.”

-The biggest actual flaw, imo, is that they didn’t achieve the reductions in insulin they were shooting for.
Fasting insulin & c-peptide weren’t different between the groups, and only when 24h c-peptide was assessed did they reach statistical significance.  Maybe lower carb would’ve done it, but as mentioned above, they went as low as they could go given the restraints of the study design.  Maybe longer duration would’ve done it, but: 1) this was already the most expensive study EVER; and 2) you can’t really keep people locked up in metabolic chambers for much longer… so they would’ve had to sacrifice accuracy, and I don’t think Dr. Hall would’ve been very happy about that.

Speculation:  OK, so if LF actually DID beat LC (in 6 days) (which it didn’t), here’s a [fringe] hypothesis about how it may have happened: at baseline, participants were weight stable: eating 109 g fat per day & burning 109 g fat per day.  Suddenly drop fat intake from 109 to 17, but body is still burning 109.  It takes a few days to downregulate fat oxidation to match intake & re-establish homeostasis.  Glucose oxidation doesn’t have this problem: drop carbs from the diet and glucose oxidation shuts down rather quickly. 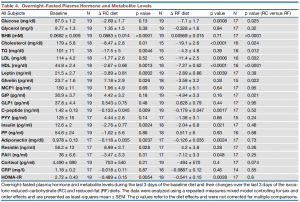 This is only a problem if your study is 6 days.  The authors almost addressed this by showing the RQ dropped when switching to low carb, which reflects decreased carb intake, but it hadn’t quite reached the new Food Quotient which should be just south of ~0.76 on a 50% fat diet with 30% energy deficit. 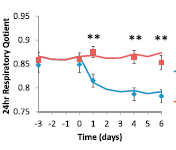