I’m talking to you, Mandy Oaklander!

Regarding the new low carb vs low fat study, she writes: “Popular diets are pretty much the same for weight loss, study finds.”

Further, “An earlier study in Annals of Internal Medicine did find that low-carb dieters lost slightly more weight than low-fat dieters after one year. The study today reached similar conclusions, but the differences in weight loss were not significant.”

Perhaps Mandy just doesn’t realize there’s a difference between significant, as in “meaningful,” and significant, as in “P<0.05.”  Pro-tip: you can tell them apart relatively easily, because the latter is usually accompanied by a cute little asterisk.  For example, the differences in weight loss were quite statistically significant (P<0.05): 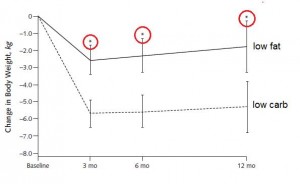 She goes on to say “After a year follow-up, some of those pounds crept back for people on both diets…”

To that I say: yeah, but fat mass continued to decline in those on the low carb diet

, meaning some of that weight re-gain was muscle: 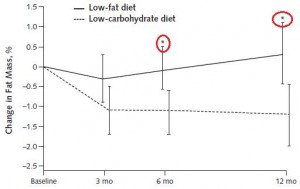 So, between 6 and 12 months, carbs and calories were creeping up in the LC group, yet fat mass was still declining.  Perhaps this way of eating improved their metabolism, or restored the ability to effectively partition nutrients.

***in real-time: at this point, I realize that Mandy was actually talking about the other study, which she was covering accurately.  Sorry, Mandy!***

…so maybe the low-carb (LC) diet

improved muscle mass because it was also high protein

? …perhaps, but 19% vs 24% (71 vs 85 grams) isn’t a very big difference.  Alternatively, since the LC group really just maintained absolute protein intake (86 grams at baseline, 85 at month 12), whereas low-fat (LF) dieters decreased (86 grams at baseline, 71 at 12 months); perhaps this is why LF lost muscle mass..?  Still, those changes in protein intake are small, and I think people can be too quick to chalk up the benefits of LC to “high protein.”

have been giving me headaches for years… the low fat diet caused headaches (P<0.05): 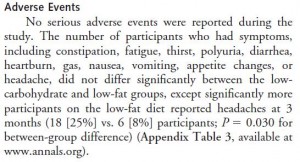 The study Mandy was actually talking about: Comparison of weight loss among named diet programs in overweight and obese adults: a meta-analysis (Johnston et al., 2014)

It was a meta-analysis, which is just about the only type of study capable of taking down LC.

…but at least it had this cool chart (modified): 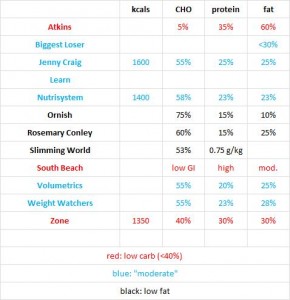 The macro’s in “Low fat” overlap with “Moderate,” implying “Low carb” is “EXTREME”  …the authors’ bias is subtle, I’ll give ‘em that, but I’m getting too old for this.

is as good as low carb for fat loss, here’s your best bet: recruit young, exercise-tolerant overweight patients who aren’t on any meds.  PROOF (see Ebbeling study).  Or find 10 similar ones and write up a pro-LF meta.

If you want to show low carb is better, recruit patients with obesity.