Or: what happens when you eat a ton of protein?

)
Comment (1): I think sedentary, physically inactive, and non-exercisers should be in this range to offset disuse atrophy.  And they should exercise.
Comment (2): Do athletes really need more protein than non-athletes?  They have exercise, a powerful anabolic stimulus.  More protein may improve performance or body composition, but they might not *need* it, in terms of nitrogen retention… there’s probably a study on this.

4.4 g/kg! for 8 weeks in resistance-trained individuals. 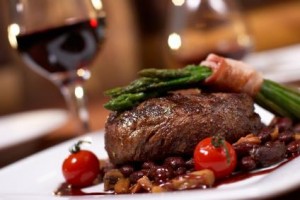 They recruited twice as many participants into the high protein group because they predicted a high dropout rate.

Aside: a group who studies bone metabolism tried to do this when I was in grad school.  There were some  problems: 1) the participants stunk, literally.  Gas.  A lot of it.  So much so that some dropped out of the study.  And 2) it’s difficult to consume over 300 grams of protein daily, consistently, for weeks at a time – some people didn’t drop out, but simply couldn’t force that much down. Even from protein shakes, which were used to supplement when necessary (also to selectively increase protein% sans other macro’s… protein-rich foods are usually very nutrient-dense, unlike protein shakes, but they wanted to look specifically at protein, only protein, and shakes served that purpose).

Changes in body composition after 8 weeks of consuming 4.4 g/kg protein were not statistically significant, but here goes it anyway: 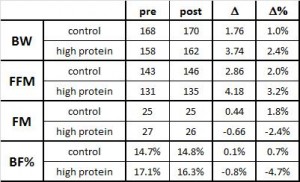 And Bod Pod is a pretty good way to assess body composition (better than calipers; not as good as but less expensive than DEXA). 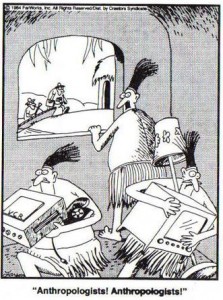 Everybody exercised more (they weren’t supposed to do this); however, the control group increased training volume twice as much as the high protein group.  The added anabolic stimulus may have closed the gap between the groups.

Counterpoint: the control group ‘went on a diet,’ which usually doesn’t bode well for muscle gains, although they did gain a bit of fat mass …because there wasn’t enough dietary protein to match the increased anabolic stimulus with muscle hypertrophy…? 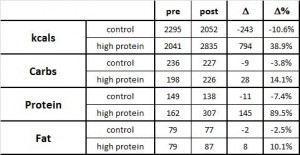 This is speculative, but doesn’t seem too far-fetched when viewed comprehensively: the high protein group was eating WAY more calories, but since they were protein, and coupled with increased resistance exercise, the result was muscle hypertrophy (almost 50% more than the control group) and fat loss.  The added thermic effect of dietary protein also *could’ve* added a significant boost to energy expenditure, simply because it was a LOT of protein.  Given all the changes (food/macro’s, exercise volume, etc.), it’s difficult to predict the absolute difference in energy expenditure between the groups.  But that’s neither here nor there, because:

These findings are relatively similar to George Bray’s overfeeding study …they compared overfeeding low and high protein diets, and showed that high protein increased muscle mass whereas low protein had the opposite effect.  Both groups gained fat mass (more so on the low protein diet), although this may have been because neither group was exercising.

Yes, it depends on how you look at things.