Proceed with caution, this is an exploratory post.  Replacing CakesCookiesPiesPastriesBreadCerealsBiscuitsPizzaMuffins with [insert any whole food item here] is just a good idea.  And more reasons to eat dark chocolate

In Inflammatory, trans, or linoleate? the idea was explored that it might not be the theorized textbook pro-inflammatory end products of omega-6 fats that give them a bad rap, but rather the foods that contain them – ie, “cakes, cookies, pies, and pastries” (Kris-Etherton et al., 2012 NHANES), or “bread, cereals, cakes, biscuits, pies, pizza, and muffins” (Meyer et al., 2003 from down under). 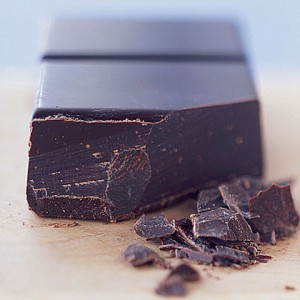 Further, what starts out as an omega-6 fat can easily become peroxidized or isomerized into an oxidized or trans fat, respectively, via industrial molestation or just plain old cooking (eg, Romero et al., 1998, Marmesat et al., 2012, & Minami et al., 2012) – even just a few minutes in the microwave (Herzallah et al., 2005)!  I don’t know exactly what all of these end products are for sure, but they might look something like this: 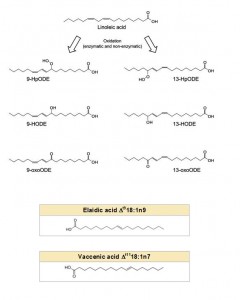 Of the 18-carbon varietals:
Olive oil’s

famous omega-9 fat oleate (Dc918:1n9). Cis, and largely health neutral.  The trans version is elaidate (Dt918:1n9), which comes from the processing and/or partial hydrogenation of vegetable oils.  This is likely what linoleate was prior to industrial molestation or microwaving.  Viper.

Vaccenic acid (Dt1118:1n7) is the major 18-carbon trans fat in dairy.  It is a natural precursor to the magical CLA (Dc9,t1118:2n7 aka rumenic acid), which is also found in meat & dairy.  Both are trans fats, and both seem OK, although one study showed ruminant trans fats was associated with sudden death (Laake et al., 2012)…  although this study also showed lower stroke risk in those who ate the most partially hydrogenated vegetable oil :/

Of the shorter albeit no less interesting 16-carbon varietals:
Palmitoleate (Dc916:1n7), it’s like a 16-carbon version of oleate found in dairy, macadamia nut oil

The worst trans fat seems to be elaidate viper, the trans version of oleate and/or 18-carbon version of palmitelaidate.  Vaccenate & palmitelaidate get a temporary pass [for now], probably due to their relative absence from CakesCookiesPiesPastriesBreadCerealsBiscuitsPizzaMuffins. 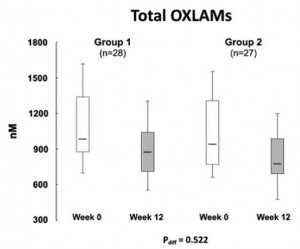 .  Notably, the n6/n3 ratio didn’t matter, only total amount of n6 (shoutout to Jamie Scott  & Walter Willett for stressing the importance of that point).

*I say “wink wink” because we think it was native linoleate that they were reducing, but who knows which derogatory linoleate metabolite it actually was.

Peroxidized metabolites of linoleate reduce the anti-inflammatory nature of HDL in mice (Imaizumi et al., 2010).  It might not be the linoleate per se.