“The nurses’ orders were to sit quietly by, spoon in hand, and make no motion…”

The babies never had anything other than breast milk prior to starting the experiment.  Fully ad lib, they could have as much of whatever food they wanted.  Every morsel was weighed and quantified.

“Armed with growing evidence from the newly emerging field of nutrition, doctors began prescribing with bank teller–like precision what and when and how much a child should eat in order to be healthy.”  #fakenews LOL

Results: “Every diet differed from every other diet, 15 different patterns of taste being presented, and not one diet was the predominantly cereal-and-milk diet, with smaller supplements of fruit, eggs and meat, that is commonly thought proper for this age.”

In other words, they were given a fighting chance.  “She did not present her little ones with a foolproof diet, just a not-intrinsically-foolish one”  (Strauss, 2006).

Not: “a Big Mac mush, a slurry of Snickers, and cola galore”

Book by Benjamin Spock: The common sense book of baby and child care 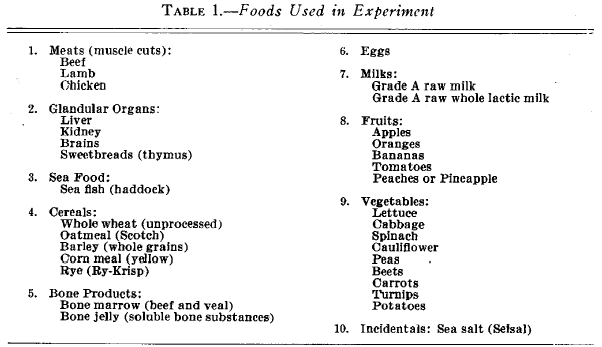 The couldn’t present all of the foods at every meal, but got in about a dozen or so, as such:

All unprocessed whole foods.  Some cooked, some raw.

The babies tried to eat with their hands, sometimes stuck their face into the bowl.  The nurses were instructed to not interfere, but eventually the babies just started pointing to bowls and the nurse would spoon-feed them.  Some would even take a spoonful of salt, sputter & spout and wrench it down… then do it again! 🙂

If they ate the entire contents of a particular dish, next time the portion size was increased to accommodate.


Here’s what they ate (top is Choice of Food by weight, bottom is Source of Calories): 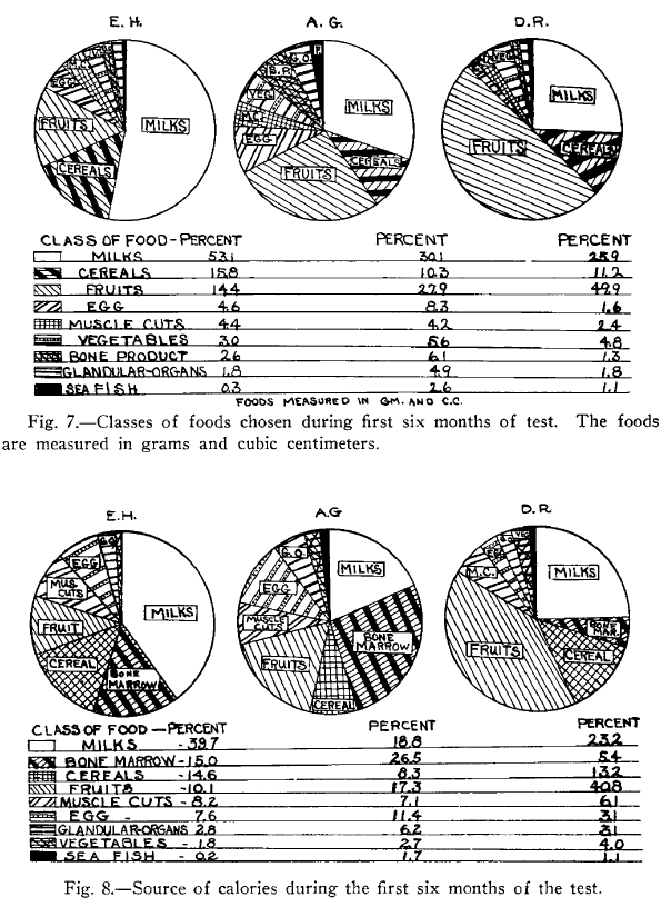 This part is crazy:

1) one baby had rickets going in to the study.  When offered cod liver oil, he selected it.  When his rickets resolved, he stopped selecting it.  None of the other babies selected cod liver oil.  Only the one with rickets, and only until it resolved.

This has actually been seen before in nature: the tails of some crayfish are very rich in arginine.  If you feed them an arginine-deficient diet they will eat other crawfish’s tails.

2) during the experiment, which lasted up to 4 years in some cases, appetite would fall 24-48 hours prior to onset of a fever and return 12-24 hours prior to its offset.  Consistently.  During this period, there was a strange preference for beets, carrots, and raw beef.

Babies know best.  You might be thinking: “of course they’re going to thrive, the only options are healthy options.”  No, that’s not how the study was designed.  It could’ve gone massively wrong.  For example, nothing was stopping the infants from selecting vegan or meat-only diets.  Fruitarianism was on the table.  All of those “diets” would result in multiple vitamin/mineral deficiencies and maybe even permanent long-term damage.  Actually, it’s amazing that all of the infants thrived; none showed any signs of deficiency.  Self-selected omnivorous diet with enough variety to meet all of their nutritional needs.

“There were no failures of infants to manage their own diets; all had hearty appetites; all throve.”

Big hat-tip to George Henderson  for Tweeting this article about Davis’ experiments.