Turmeric is about 5% curcumins by weight, or it takes about 20 grams of turmeric to get 1 gram of curcumins.

But you can’t go eating it by the spoonful because: 1) that’s nasty; 2) it’s messy and stains everything yellow; and 3) it’s not bioavailable, like, at all. 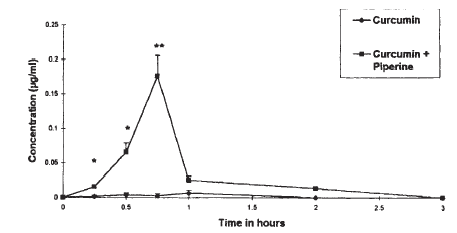 Fortunately, bioavailability is drastically increased by black pepper &/or dietary fat.  For this reason, most curcumin supps contain either piperine or some sort of lipids.  I’m not a big fan of piperine because it seems to non-selectively increase the absorption of tons of things – and there are some things we don’t absorb for a reason: they’re toxic… so I’d rather just use a little pepper and take it with some seafood.

Curcumin boosts DHA in the brain: implications for the prevention of anxiety disorders (Wu et al., 2015)!  It does this by actually increasing the enzymes involved in converting alpha-linolenic acid (ALA) into DHA.  Normally, this conversion is poor: in the figure below, feeding ALA alone had no effect on brain DHA, but combined with curcumin caused a 50% increase! 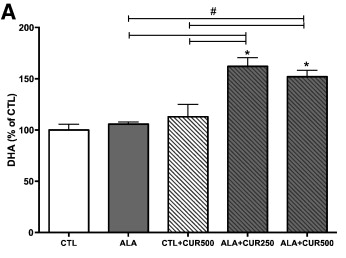 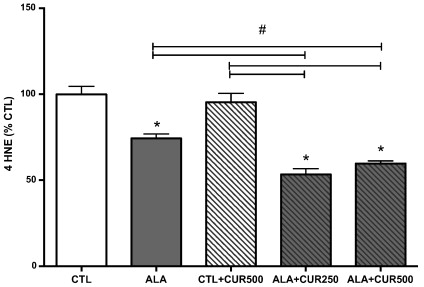 My advice (since I generally assume most people are DHA deficient) (sorry): add some turmeric & pepper to your mayonnaise or salad dressing or something.  Due to the synergistic nature, it doesn’t have to be a lot*.

*actual dose?  I don’t know.  If taken consistently, with black pepper & dietary fat, with meals, might be just a few grams.

If you like what I do and would like to support it, head over to Patreon! Five bucks a month for full access to all articles. It’s ad-free and you can cancel if it sucks 🙂

For consultations, send me an email with a brief description of your situation: drlagakos@gmail.com.