Are carbs stored as fat?

Lots of metabolism talk below, but first a brief intro.  My “muse,” if you will.

In the original article, Taubes basically re-states his philosophy on obesity.  Nothing new.  But one rebuttal by Cottrell got under my skin (Cottrell, 2013), and Taubes’ response was woefully inadequate.

Cottrell [sic]: “A third incorrect assertion is that obesity can be attributed to the conversion of carbohydrate to fat. This is an unsatisfactory explanation of obesity, because this route is a minor pathway to depot fat in humans, even under conditions of substantial overfeeding of sugars to obese subjects.  An unproved assumption is that the hypothetical diversion of carbohydrate energy into fat storage leaves the subject hungry, thus stimulating overeating.” 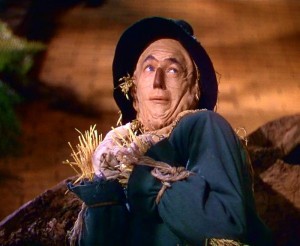 Cottrell set up a straw man and handily took it down.  The primary mechanism whereby excess carbs contribute to obesity is via insulin’s effects on adipose tissue.  Even if you’re eating very little fat, insulin will cause it to get stored.  Insulin is very good at this – it is actually far more potent at stimulating fat storage than it is at stimulating glucose uptake (eg, Insulin vs. fat metabolism FTW).  Cottrell’s straw man is that excess carbs themselves are stored as fat.  This does not occur to any appreciable extent in humans.  Here is why I believe that to be true, from one of most insightful and informative studies on the topic IMHO.

The “massive carbohydrate overfeeding” entailed a 5000 kcal diet with over 1000 grams of carbs.  Per day.  Do not try this at home.

If anything would stimulate carb-to-fat de novo lipogenesis proper, 1000 grams of carbs would do it.  After one week of this protocol, the participants gained roughly 10 pounds.  The goal was to keep them in an energy surplus of 1500 kcal, so on day one, 1500 additional kcal were fed.  But energy expenditure cleverly responded with a 370 kcal boost, so the researchers retaliated by feeding 1870 additional kcal on day two.  Energy expenditure responded yet again with +100 kcal, so the researchers adapted.  And so on, and so forth.

Graphically, it looked like this (overfeeding took place from days 3 through 10): 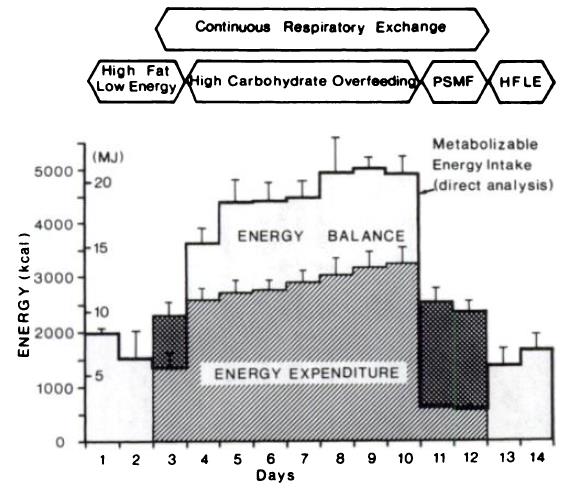 Lipolysis was completely shut down, and although they weren’t eating very much fat, you can bet all of it was getting stored [as body fat].  A lot of the excess carbs were burned, in 2 ways: 1) they stopped the burning of all other fuels and thus carbs comprised the only fuel contributing to metabolic rate; and 2) energy expenditure increased by 35%! so the excess carbs were used for regular metabolism plus the extra 35%.  Glycogen storage was maxed out – much of the 10 pounds they gained was water that accompanied said glycogen (not fat from DNL).

It was only then, after energy expenditure was induced by record levels and glycogen stores were superdupersaturated, after about 5 days of 1000 grams of carbs/d, did appreciable amounts of dietary carbs start to show up in fat.  Insulin levels tripled.  The participants could barely do it.  They were cramming bagels down their throats while the researchers were begging them to persevere.  In other words, the participants could hardly eat enough carbs per day to get any of those carbs stored as fat.

I’m not saying none of the fat mass in a morbidly obese patient with >50% body fat didn’t come from carbs – no, DNL is constantly occurring, but so is fat oxidation, “turnover,” such that fat balance is maintained.  But most of the body fat in the morbidly obese comes from dietary fat.  Excess carbs are burned in preference to other fuels and stored as glycogen long before they are converted into body fat.  Obesity does not occur due to massive carbohydrate overfeeding; it occurs due the storage of dietary fat, no matter how much or little is consumed.

Check out my Patreon campaign! Five bucks a month for full access and you can cancel if it sucks 🙂