I’m not pro-big tobacco or cigarettes, but I am anti-scare tactics.  It is usually the news media or politicians, exaggerating and/or grossly misinterpreting some study findings in order to make a great headline or secure votes.  But in this case, it wasn’t. The predators who were preying on our fear were the scientists.  Smokers of the world, unite! 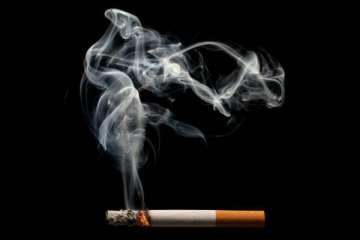 Dr. Hurt and colleagues analyzed the rates of heart attack and sudden cardiac death in the 18-months before and after: 1) the restaurant smoking ban in 2002; and 2) the smoke-free workplace enacted in 2007.  Pictorially (please forgive the horrible color scheme):

This is the epitome of an epidemiological study; there are a million things that could’ve occurred in this time frame to affect heart disease (statin use, sugar consumption, etc., etc.), but these researchers decided it was unequivocally secondhand smoke.

In brief, not surprisingly, the restaurant ban didn’t do anything.  I say “not surprisingly” because how much time do people spend in restaurants per week?  2 hours?  If you’re a smoker, abstaining for those 2 hours per week while still smoking for the other 112 waking hours will make you no healthier.  And if you’re a non-smoker, 2 hours of dilute secondhand smoke per week will have no appreciable health impact if the other 166 hours are smoke free.  So the restaurant ban simply had no effect (heart attacks went down a notch while sudden cardiac death went up a notch in the 18 months after the restaurant smoking ban).

The smoke-free workplace was moderately more effective; a significant reduction in heart attacks occurred after its enactment (although sudden cardiac deaths went up a notch).

Qualm #1.  Why only look at two specific end points (heart attack and sudden cardiac death)?  Total mortality was not reported and I suspect there was a reason for that.  If total mortality increased, then any journalist could easily print: “attempts to reduce the exposure to secondhand smoke are associated with increased mortality.”  In an epidemiological study, that’s just the nature of the beast.  And given the anti-big tobacco sentiments of the authors, this would be crushing.  But more likely, total mortality was unaffected:

Changes in U.S. hospitalization and mortality rates following smoking bans (Shetty et al., 2010)
U.S. state and local governments have increasingly adopted restrictions on smoking in public places. This paper analyzes nationally representative databases, including the Nationwide Inpatient Sample, to compare short-term changes in mortality and hospitalization rates in smoking-restricted regions with control regions. In contrast with smaller regional studies, we find that smoking bans are not associated with statistically significant short-term declines in mortality or hospital admissions for myocardial infarction or other diseases. An analysis simulating smaller studies using subsamples reveals that large short-term increases in myocardial infarction incidence following a smoking ban are as common as the large decreases reported in the published literature.

Qualm #2.  They measured cardiac events in the same geographical region as the smoking bans.  This is far from the nail in the coffin.  But despite a 25% reduction in actual smoking rates, the authors insisted the results were due to reduced exposure to secondhand smoke. 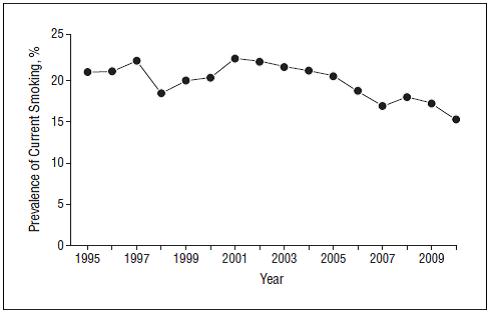 Next they’ll be telling us that secondhand smoke is bad as playing in traffic.

But the headlines actually got it right:

Smoking bans are a boon for heart health (David Wagner, The Atlantic Wire)   Wagner credits the “smoking ban,” not a reduction in exposure to secondhand smoke.  +1

Dear Dr. Hurt,  getting an occasional whiff of cigarette smoke is nowhere near as bad as smoking a pack a day.  It is ridiculous to suggest otherwise. 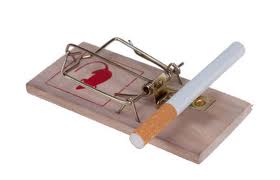 Qualm #3.  Given the epidemiological nature of this study, we could have concluded that the smoking bans were associated with metabolic demise because the rate of diabetes and obesity increased just as the smoking rate declined.  Cigarettes kill a lot of people, around a half a million people per year.  But obesity and diabetes kill as much or more.  In other words, an overweight smoker might be better served by losing weight rather than quitting cigarettes.  Secondhand smoke kills maybe a tenth of what firsthand smoking does; so even if the authors are correct about secondhand smoke, and if the restaurant smoking ban or smoke-free workplace actually did contribute to obesity and diabetes, then they’ve thrown out the baby with the bathwater (ie, anti-smoking legislation would increase total mortality).

Alternatively, hell, “cigarette smoking for weight loss” even has its own Wikipedia page.  That’s more than I can say for The poor, misunderstood calorie

or even the Laws of Energy Balance.  just sayin’

4 responses to “Up in smoke”