Man vs. ape     Or
Postmenopausal women vs. Africa green monkeys 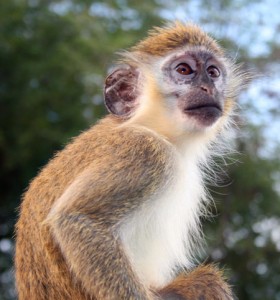 In this study, Kavanaugh and colleagues fed either a control diet or one fortified with trans fatty acids to a group of African green monkeys for 6 years.  Two immediate strengths of this study are 1) the use of primates, who respond to dietary intervention much more similarly to humans than rodents, and 2) the duration is long enough to model what would be seen in a human population.  Furthermore, to prevent differences in food intake from affecting the outcome, all of the animals were fed 70 kcal/kg of their initial body weight.  This feeding regimen was chosen specifically to prevent an energy imbalance, i.e., the monkeys were to be “weight stable” for the entire study.  This method is superior to pair feeding, where one group is fed ad libitum and the other group is given the same amount of calories as the first group, but instead of grazing all day (normal behavior) they get it all in one sitting.  Pair feeding is stressful for the animals and causes a whole host of other problems.  Both groups in this study received exactly the same amount of food (70 kcal/kg of initial body weight) every day for 6 years.

The diet for half of the monkeys was supplemented with 8%, or ~4 grams, of trans fatty acids.  The average intake for humans is 3%, or ~7 grams per day.  An intake level of 8% for humans is around 18 grams, which could be accomplished by eating fast food or microwave popcorn a few times per week.  So besides being informative and shedding a new light on energy balance, this study is also of practical relevance. 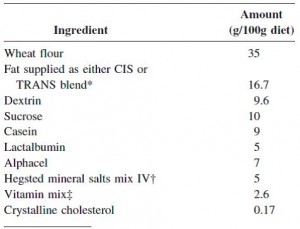 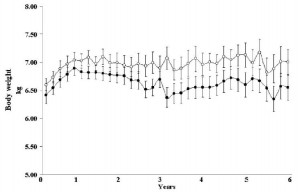 Body weight was roughly similar in CIS (closed circles) and TRANS (open circles) but started to diverge toward the end of the study.

The control group (CIS) weighed 6.41 kg at baseline and 6.55 kg at follow-up, an increase of less than 2%.  This was expected because at baseline, 70 kcal/kg per day was precisely enough food to keep them weight stable, so essentially nothing changed in these monkeys.  More specifically, since food intake and body weight didn’t change, we can say that there were probably no major perturbations in energy balance in this group.

As seen below, the excess weight in the TRANS group was primarily in the form of increased visceral fat:

An abdominal CT scan.  The lighter areas represent fat tissue.  Both pictures depict roughly similar amounts of fat in the outer region (subcutaneous fat), whereas the TRANS group had significantly more fat tissue within the viscera. 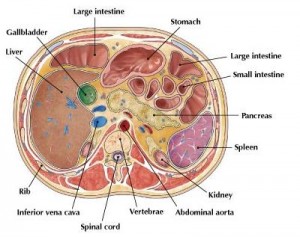 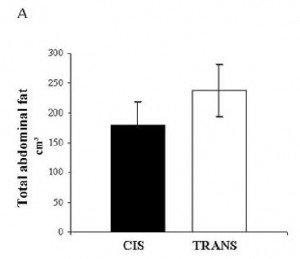 In all, TRANS had 27% more fat mass.  Fasting glucose and insulin levels were unchanged but postprandial insulin levels were markedly elevated in TRANS (see below), suggesting that dietary trans fats indeed caused insulin resistance.  I boldly use the term “caused” because this was a fairly well-controlled intervention study; the only thing different between the groups was the diet. 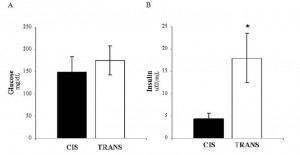 The TRANS group gained a significant amount of fat mass despite an absence of excess calories.  This was most likely caused by the trans fat-induced insulin resistance and subsequent postprandial hyperinsulinemia.

I can see two ways to interpret these data.

Of course, these processes would occur simultaneously and discreetly in vivo, but for simplicity’s sake I’ve broken it down.

Loses 0.022 kilograms of muscle, new body weight = 6.578 kg… since FFM is reduced, BMR should be reduced.  It was a 0.33% loss of body weight which was entirely from muscle (in this theoretical example), so perhaps BMR declines proportionately 460.46 kcal/d (? there are more accurate formulas in the literature, but this approximation is sufficient for our purpose)

all of those excess calories formerly burned in the lost muscle are now available for storage in fat.

Wow, can the loss of less than one ounce of muscle really cause such a drastic change in fatness?!? I don’t know for sure, but exchanging the microwave popcorn for a little resistance exercise seems prudent.

(in case you were wondering, no. I didn’t guess 22 grams. I did a ton calculations to quantify the metabolic rate reduction necessary to cause an energy surplus big enough to lay down enough fat mass to compensate for the reduction in muscle [which theoretically declined in proportion to the reduction in metabolic rate] and end up as close to 7 kg as possible… it could be calculated exactly but this has taken up 30 minutes already, and I think the point has been made)

2a.  can there exist a positive energy balance selectively in adipose tissue?

2b. more likely, trans fatty acids reduce some component of energy expenditure, possibly basal metabolic rate, or perhaps the thermic effect of feeding.  Neither of these was measured, but I firmly believe energy balance was maintained.  It’s always maintained.

But the frightful conclusion remains the same: the TRANS group got fatter without eating more.  They didn’t eat more than they were supposed to but got fatter anyway.  Sad but true.

What about in humans?

This study gave a group of 52 overweight but otherwise healthy postmenopausal women 16 grams of trans fatty acids in pumpkin muffins.  The control group received olive & palm oil-enriched pumpkin muffins.  In terms of the dosing, this study is almost directly comparable to Kavanaugh’s study.  However, this study only lasted 16 weeks (probably due to ethical reasons).  They also included a lean control group (for good measure?), baseline subject characteristics are below: 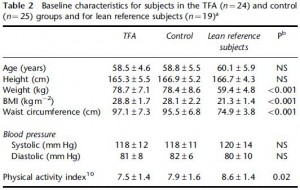 Nothing out of the ordinary.

And the investigators measured compliance empirically.  You are what you eat.  When a specific type of fat is consumed, its constituent fatty acids accumulate in body tissues like adipose and red blood cells.  So the researchers measured red blood cell trans fatty acid content.  Kudos!  (biomarkers are superior to almost any other measurement of compliance to a dietary intervention in humans) 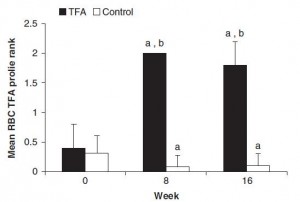 Indeed, the women ate their muffins.  But no effect on body weight! 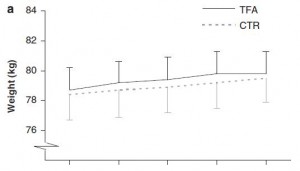 Body weight increased by about 2% in both groups.  If you want to get nit-picky, then we can make a few verrry long stretches concerning the body composition data: 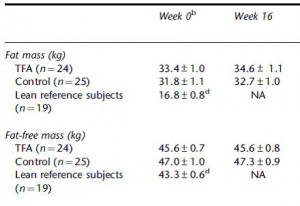 The increase in fat mass was 33% greater in TFA compared to controls!  (fat mass increased by 3% in the control group and 4% in TFA).  The increase in percent body fat was twice as big in TFA compared to controls!  (body fat percent increased by 1% in the control group and 2% in TFA).  IOW, the changes in body composition were nil.  This does not necessarily refute Kavanaugh’s African green monkeys because that study lasted 6 years; the insignificant changes in fat mass in Bendsen’s women over the course of 16 weeks could very well add up to significant changes after 6 years.  Actually, if the endpoint was indeed a 6% weight gain after 6 years (like the monkeys) (78.7 * 1.06 = 83.422 -78.7 = 4.722 / 6 years = 2.156 grams per day x 16 weeks = 241 grams) we might have expected these women to gain less than they actually did (~ 241 grams in 16 weeks compared to 1,200 grams).  In truth, however, these numbers are well beneath what can actually be measured accurately even in a laboratory setting.  So it is bona fide nit-picking.

Maybe it’s time to throw in the towel and confess that trans fats are significantly worse for African green monkeys than for overweight but otherwise healthy postmenopausal women.  There was no change in visceral adipose between the groups: 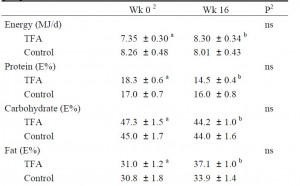 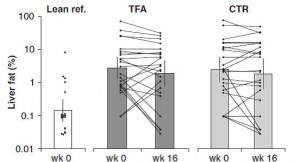 Furthermore, liver fat didn’t change in the control group because 1) their carbohydrate intake didn’t decline, and 2) they weren’t eating a ton of trans fats.  IOW, neither of the major dietary determinants were altered.

So, according to these colorful explanations, trans fats may have been just as harmful to Bendsen’s women as they were to Kavanaugh’s monkeys.  The reason why the results differ can be at least partially explained by the inferior dietary intervention utilized by Bendsen.  IOW, Kavanaugh’s dietary intervention was perfect; the subjects (monkeys) ate their prescribed diet exactly, no cheating, no sneaking in any snacks.  The diet changed markedly in Bendsen’s study; all women gained weight meaning that the test foods were probably not isocalorically substituted for foods in their normal diet.  Perhaps they just ate the foods in addition to their normal foods (unlikely considering the marked changes in macronutrient consumption).

Some more data from Bendsen’s overweight but otherwise healthy postmenopausal women were reported in another paper, and hints of trans fat-induced insulin resistance were revealed…

Here are the results from an oral glucose tolerance test:

Glucose:  Just like Kavanaugh’s monkeys, there was no change in the glycemic response to a glucose load.

On the right, insulin levels. 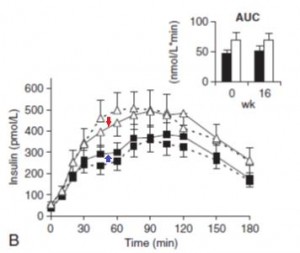 Insulin:  The open triangles are the control group, solid squares are the TFA group..  The dashed lines indicate insulin responses at baseline and the solid lines represent insulin responses at 16 weeks. In a randomized controlled intervention study, ALL changes in the intervention group must be compared not only to baseline measurements (pre-treatment), but more importantly they must be compared to the changes in the control group.  Over the 16 weeks, insulin response declined very slightly in the control group (see the little red arrow around the 45 minute mark).  However, insulin response increased slightly in the TFA group.  Take either of these changes individually and they would amount to nil.  But when you consider the change in control vs that in TFA, a modest trend appears.  The TFA group is beginning to show a hint of peripheral insulin resistance.  Maybe I’m seeing something where there is nothing, but the Kavanaugh’s study lasted 6 years and Bendsen’s study was only 16 weeks.  We must expect the changes to be ~20 times smaller in the Bendsen study.

OK, perhaps I got lost in the minutiae, or lost sight of the forest for the trees, but that doesn’t mean I’ll be eating microwave popcorn any time soon.  And on the bright side, creating this post was a great brain exercise