What’s on YOUR plate? 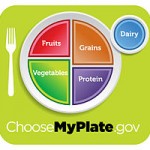 whenever something goes up, something else goes down.  e.g., compare the fat and carbs in the three 30% protein diets:

It is virtually impossible to study macronutrients in isolation, but by looking collectively at a wide range of diet intervention trials, we can get some insight into the metabolic program orchestrated by fat, protein, and carbohydrates.

the “bar:” if we are to conclude that increasing nutrient “A” causes effect #1, then it must be true if the calories are compensated by 1) lowering nutrient “B” while leaving nutrient “C” unchanged, and 2) lowering “C” while keeping “B” unchanged.  And it doesn’t count if this is accomplished indirectly by abstract statistics.

To make a very long story very short, here’s what happened after 24 weeks:

Despite similar calorie reductions, HF lost more BW and FM than HC (HP was intermediate).  Fasting insulin was reduced most in HF and this group lost the most fat.  Anyone as surprised as me about the dramatic reduction in CRP in the HF group?  (+2 for HF)  Fasting insulin was reduced the least by HP but HP lost more fat than the HC.  You might think this undermines the insulin-fat theory, but alas, draw your attention to the kcal’s.  Perhaps the bigger reduction in calories in HP helped them shed a little more fat than HC despite a lower reduction in insulin. Furthermore, HF lowered insulin more and they lost more fat but had the same caloric deficit as HC.

But does it meet the “bar?” IOW, are these results due to the abundance of dietary fat or the lack of carbs?

Alternatively, is HC inferior because of the low fat content or the high carb content?  To address this, we need to compare two diets with similar fat but different carbs.

This study was half as long (12 weeks vs. 24 weeks), but compensated by a more robust calorie deficit

Both groups were supposed to undergo an identical degree of calorie restriction, but HP lost slightly more weight despite eating slightly more food than HC.  HP also lost more fat and their insulin was more suppressed.  And importantly, HP lost less muscle than HC.  (and wow, check out those CRP data [+2 for HP]).  This was all confirmed in a much larger year-long study comparing two 30% fat diets, HP vs. HC, with nearly identical results (Due et al., 2004 International Journal of Obesity)

To bring this around full circle: both HF and HP independently beat HC, so what do you think would happen in a face-off between HF and HP?

This study was of intermediate duration (16 weeks) but had the greatest weight loss:

HF vs. HP?  It’s a tie!!  Insulin was reduced more by HP and fat mass declined ever so slightly more in this group, but the difference was very small.  When the data were broken down by genders, women did retain more muscle on HP but again, the difference was small.

So if anyone tries to quiz you about diets and weight loss, like the way my colleagues relentlessly do to me whenever a new diet study is published, armed with this knowledge you should be able to guess the outcome (probably)…

I know what you’re thinking… what if they try to trick me, like comparing the effects of HP to high fiber??  Fiber is supposed to be good for you, green leafy vegetables and all, right?

Just stick to the data outlined above.

With the exception that the high fiber group was getting 39 grams of fiber per day while HP was only getting 24 grams.

This was the shortest study (8 weeks) and accordingly weight loss was the least.

just don’t gamble with this information 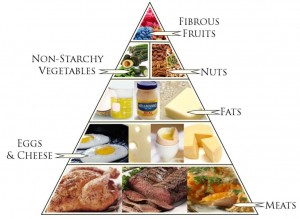