The faux-low carb mouse and a diatribe

The researchers generated a mouse with half as much insulin as normal mice.  Physiological insulin levels remain intact, but hyperinsulinemia is genetically inhibited.  For the sake of simplicity, we’ll call them “InsKO.” 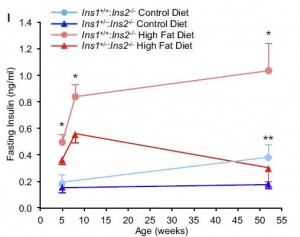 because all along they’re eating just as much but burning a whole lot more: 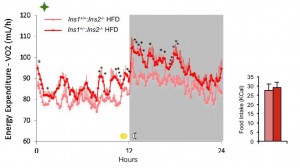 Adipose tissue is resistant to insulin in the normal mice, as demonstrated by increased free fatty acids (pink bar below) despite higher insulin levels (pink line above).  The opposite is true for InsKO mice: 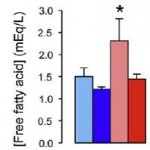 But this doesn’t matter so much because InsKO’s chronically lower insulin levels never allow excess fat to be stored in the first place.  As they overeat a high fat diet, the fat can’t get stored so it’s burned instead.

(“isocaloric,” just like the faux-low carb mice); this is true in a variety of contexts (eg, Metabolic rate per se).

But the InsKO model is much  more nuanced…

For example, you need insulin to store fat

Fat tissue in obesity keeps growing (because of the carb-induced hyperinsulinemia) until adipose becomes insulin resistant, at which point or shortly thereafter on comes frank type II diabetes, then later some of the rather nasty complications.

The constant access to dietary and stored fat in InsKO mice, via low insulin levels, causes elevated energy expenditure which provides an “out” for the fat to be burned away.  This is similar to the PPARg+/- mice who have an inability to store fat because of a defect in adipogenesis, leading to increased energy expenditure (Kubota et al., 1999): 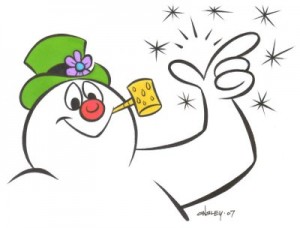 6 responses to “The faux-low carb mouse and a diatribe”