taking the fun out of FODMAPs

bring a gun to a knife fight, part II: why “oligosaccharides” are the odd-man out.

The “O” in FODMAPs refers to “oligosaccharides” and includes a very important group of gut-friendly nutrients: prebiotics.  While some specific oligosaccharides are problematic, others are highly beneficial.

The good guys: isomalto-oligosaccharides (MOS), inulin and FOS, and galactooligosaccharides (GOS).  These nutrients stimulate the growth of healthy gut bacteria (bifidobacteria), alleviate gastrointestinal distress, and promote overall well-being.  These are all oligosaccharides, which are unfortunately excluded from the low FODMAPs diet. 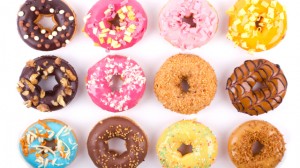 support for the above claims:

Yen showed that at doses of 11 – 22 grams of MOS increased both bifidobacteria and lactobacilli, and improved gut symptoms in a dose-dependent manner.  Similar symptomatic improvements were seen by Chen et al. (2001) with 10 grams MOS per day.  MOS are rarely found in the diet but are present in physiologically relevant doses in Quest Protein Bars

Inulin is a more complex version of FOS and the form found in the diet (garlic, onions, endive, etc.).  In 1995, Gibson and colleagues showed that both inulin and FOS were roughly equivalent in efficacy: 15 grams of either one increased bifidobacteria and lactobacilli.  Later, Menne et al. (2000) showed that as little as 8 grams of inulin per day increased both bifidobacteria and lactobacilli (moreso than 22 grams of MOS) with a greater effect on the former.  And Kleeson (1997) showed that up to 40 grams was even more effective and was relatively well-tolerated (confirming my suspicion that not all oligosaccharides are created equal…).  Both NOW Foods

Overall, GOS is the most promising.  Depeint and colleagues (2008) showed that 3-7 grams of GOS per day for a week caused a huge and selective increase in bifidobacteria in healthy adults.  Silk (2009) showed even greater benefits in IBS patients.  IBS patients usually exhibit some degree of dysbiosis; indeed, while it isn’t a perfect comparison, Depeint’s healthy subjects had 10 times more bifidobacteria at baseline compared to Silk’s IBS patients.  Unfortunately, however, GOS is yet to go mainstream.  It can be found in Bimuno, which isn’t cost-limiting  until you factor in shipping charges (only sold from the U.K.).  GOS are also present in a variety of infant formulas, which, given their relative scarcity, is a pretty good indicator.

Why is this article sub-titled “bring a gun to a knife fight”?  Because supplementing the bifidobacteria or lactobacilli directly have little impact on the gut microflora.  Even at doses in the billions, almost none of them even survive (see Larsen et al., [2006]; and Tuohy et al., [2006]).  But when combined with some of these oligosaccharides, their effect is markedly improved (Bartosch et al., [2005]).  Probiotics are far more expensive than these prebiotic oligosaccharides, so unless someone had severe GI symptoms, inulin/FOS is the way to go.  On the other hand, if you have IBS, are experiencing gastrointestinal distress, or have recently undergone a course of antibiotics, then a combination of a blend of bifidobacteria

combined with inulin/FOS is probably the best treatment.

Be good to your gut.

“Death sits in the bowels; a bad digestion is the root of all evil” – Hippocrates, circa 400 BC

Join Earn.com with this link. Get paid to answer questions online!