Sir Philip Randle and the effects of blocking fat oxidation 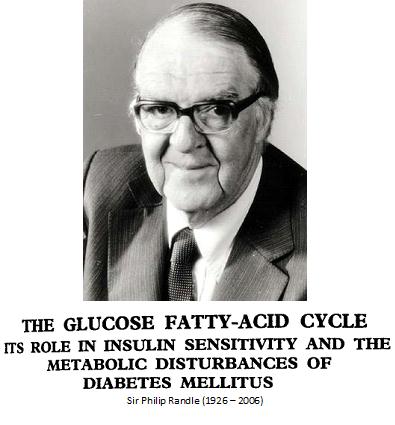 While it’s weird to think that blocking fatty acid oxidation would have any positive effects, given the theory put forward by Sir Randle, we could guess that it would ramp up whole body glucose oxidation tremendously.  And it follows that glucose tolerance and insulin sensitivity would improve.  Oxfenacine inhibits fatty acid oxidation and indeed, this is the case:

Part 2.  The Randle Cycle vs. Laws of Energy Balance 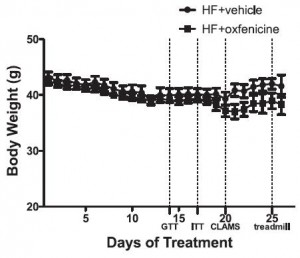 Oxfenicine reduces insulin, leading to enhanced lipolysis, but all those plasma FFAs had nowhere to go since they couldn’t be oxidized.  This is evidenced by: 1) elevated FFAs (figure below on the left); and 2) increased RER (figure below in the middle).

side note 2.  oxfenicine is relatively selective toward skeletal muscle.  So liver fatty acid oxidation continues; maybe this is why they weren’t eating more to compensate for the reduced energy availability?  Ie, there wasn’t reduced energy availability; muscles oxidized more glucose and the liver oxidized more fat (as evidenced by a slightly smaller liver [1.49 vs. 1.28 grams]).  Capiche?

Oxfenicine-treated mice lost weight, but oxygen consumption, a surrogate for energy expenditure, went down too.  And if we are to take their word for it, food intake, physical activity, and heat production were unchanged.

Side note 3b.  This is tangentially related to why some lung disease patients are advised to follow a low glucose (high fat) diet.  Burning glucose produces more CO2 to get the same amount of energy compared to burning fat.  Reducing the amount of CO2 you need to exhale is easier on the lungs.

Wow, this post is just full of nutrition science tidbits 🙂

BUT, no change in food intake or energy expenditure, and decreased body weight???   My Spidey sense is going wild.  Could this challenge the Laws of Energy Expenditure?

Where’d the fat go?  There were increased free fatty acids in the blood, but they still have weight and might affect adipose mass but not body weight.  Furthermore, even though plasma free fatty acids were doubled, this would likely amount to something on the order of < 100 ug, compared to the 10,000,000 ug of fat in adipose (in other words, increasing the release of fatty acids from adipose would have no appreciable effect on adipose tissue mass).  POST YOUR GUESSES!  I’m almost always the first one to attribute fat loss to reduced insulin levels, but it usually has a reason other than magic or gnomes.  And I’m sure it does in this case too.

I’m hoping this isn’t the answer:  the reduction in body weight was reduced by a statistically barely-nonsignificant amount (p=0.13).  In other words, it went down but the study wasn’t powerful enough to statistically detect the difference.  I’m hoping the same thing didn’t happen to food intake and heat production, because, well, “data not shown.”

P.S. ambulatory activity was shown you clowns.  Figure 2B, remember? 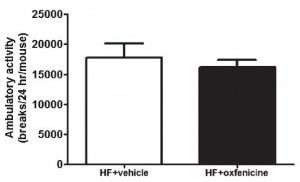