Sarcopenia has little to do with aging

It has to do with the duration of time spent being sedentary.

They say a picture is worth a thousand words, but luckily enough today you get both.

Sarcopenia: “poverty of flesh,” or the age-induced loss of skeletal muscle mass, strength, and function = reduced quality of life.  Sorry old-timers, but I hereby officially revise the definition from “aging-induced” to “sedentary-induced.”  Herein, I present evidence that sarcopenia is not a phenomenon of aging per se, but rather of disuse atrophy.  Dear Webster’s & Britannica, please revise accordingly.

Thanks to Julianne Taylor & Skyler Tanner for directing me to these images.

This study evaluated “high-level recreational athletes.”  “Masters” just means they were over 40.  And “high-level” doesn’t mean “elite,” it just means they exercised 4-5 times per week.  These weren’t super-obsessed gym rats… it’s probably who I’ll be in 7 years [sigh].

They took a lot of measurements which showed these people were pretty fit, but the money shot was this pic: 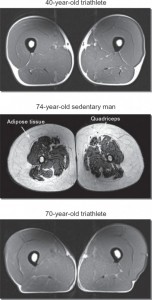 It wasn’t a randomized double-blind placebo-controlled intervention trial, but that pic made up for all of that.  Even if they cherry-picked the scans, I find them compelling.  Call it confirmation bias if you like.

12 weeks of leg exercises performed in 11 adults 85-97 years of age.  They were recruited from a geriatric hospital, and despite still kicking well beyond their expiration date, they maintained the ability to get strong: 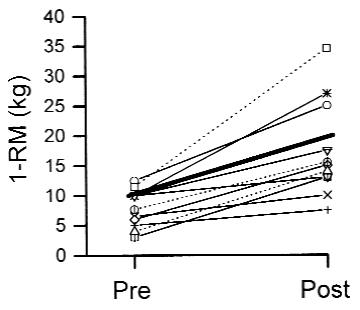 Some of these gains were likely attributable to the novice effect, or the neuromuscular adaptations that occur in untrained individuals during the onset of a new training program, but nonetheless, these data show there are no intrinsic defects caused by being old that hinder the ability to improve muscle strength [and function].

There was no non-exercising control group with which to compare the following figure, but I assure you, non-exercising 90-year old geriatrics aren’t putting on muscle like this guy did:

I’m not recommending retirees to train for a 480-pound deadlift.  Progress can probably be made carrying a gallon of water around the yard, or up and down a flight of stairs; don’t use handicap parking if your only handicap is being old.   Sarcopenia is a major reducer of quality of life.  You don’t have to join a gym but you have to get off your ass!