Atkins is similar to Paleo but allows fewer carbs 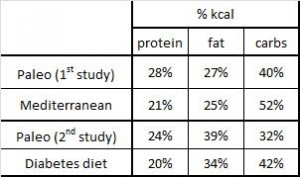 Paleo vs. the “diabetic diet” in type II diabetics (Jonsson et al., 2009 Cardiovascular Diabetology).  Lindeberg designed this particular Paleo diet with a much lower carb content (32% vs. 40%) than in the previous study with CHD patients.  A cynic, who might think that some of Paleo’s benefits are due to its low carb content, might think that since traditional Paleo and the comparison “diabetic diet” have a similar carb content (42% and 40%, respectively), Lindeberg intentionally modified Paleo for this study to make sure carbs were significantly lower than in the “diabetic diet” (stacking the deck in Paleo’s favor, according to the cynic).  I can’t find any reason to disagree with the cynic, but it didn’t work out so well for Lindeberg et al.

As detailed in a series of posts about crossover studies (part I and part II), this one was botched due to: 1) what appears to be improper randomization (baseline glucose values were 7.1 and 8.6 mM); and 2) a washout period that was too short to allow one of the primary endpoint variables (HbA1C) to return to baseline.  As such, data presentation was convoluted, which said cynic might think was intentional.  But if we take it at face value, Paleo still fails.  For example, according to this figure (which is NOT crossover data), although Paleo has a lower final HbA1C, the HbA1C reduction is much greater on the diabetic diet. 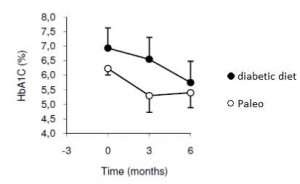 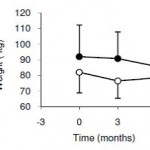 So yes, in accord with the Jonsson study (above), Paleo may have been more satiating (i.e., spontaneously lower food intake), but no, this didn’t translate to greater weight loss.  Someone needs to measure energy expenditure in Paleo dieters because it looks like this pattern of food intake either lowers basal metabolic rate or simply makes people tired (though this conclusion would be vehemently denied by Paleo loyalists).  The reduced leptin levels (Jonsson study) may have caused lower energy expenditure, but this would not entirely align with my lower-leptin-equals-higher-leptin-sensitivity hypothesis and thus cannot POSSIBLY be true :/   Alternatively, perhaps the Paleo diet really does lower energy expenditure; this would’ve been irrelevant and possibly even beneficial in Paleolithic times because: 1) they would’ve conserved more energy for “hunting” (hunter-gathers) or fleeing; and 2) weight loss was much less a concern compared to starving or being predated.

The Paleo diet is interesting in that it eludes low-carb status by selectively excluding grains, and I’m pleased that high quality studies (randomized crossover) are at least being attempted, but data thus far suggest we haven’t found anything magical about Paleo (yet)… just need better studies, especially those controlling for total carb content.

+1 for excluding grains, but not much else