Sanofi, one of the world’s largest pharmaceutical companies, just released results from its ORIGIN trial.

Basal insulin and cardiovascular and other outcomes in dysglycemia (2012 NEJM)

The goal was to see if nightly insulin injections could prevent pre-diabetics  from becoming real diabetics.  ORIGIN was monstrous: >12000 participants, 40 countries, 6 years, etc.  FYI the subjects included in this study, mostly pre-diabetics, are not usually candidates for insulin injections (diet and lifestyle modification seem to work OK for this group).  If ORIGIN showed a positive result, then the number of patients to receive this treatment, and therefore the number of prescriptions written for Sanofi’s Insulin Glargine, would increase dramatically =  $anofi 🙂

IMHO, Sanofi is hunting for a new bunch of people to whom they can market their same old drug.  (Not a good practice.)  To stay alive in the fiercely competitive pharmaceutical industry, companies have to either invent new drugs to treat old diseases or invent new diseases that use old drugs.  In this case, they are saying that pre-diabetes, or “dysglycemia,” should be a new indication for insulin.  Pre-diabetes is not a new disease, but insulin was never warranted (Rx = diet and lifestyle modification).

I have no financial disclosures to report (but I’m open to offers).  Of moral disclosures, on the other hand, I’ve got but one.  Insulin injections are fraught with side effects and should be reserved for people who need them.  I don’t believe these people need them.

After 6 long years of insulin injections (or standard care in the control group), the researchers tested for diabetes.  Lo and behold, diabetes was present in 35% of controls and 30% of the insulin-treated group; i.e., insulin-treated patients had a 20% lower chance of developing diabetes (odds ratio [OR] of 0.80, p = 0.05).  Apparently, insulin prevents diabetes. 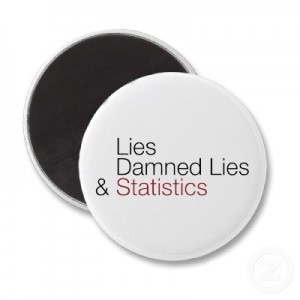 Exhibit A.  There’s a caveat to these diabetes rates.  The subjects were tested for diabetes at the end of the study.  Anyone who didn’t have it was re-tested a few weeks later; only those who didn’t have it were re-tested a few weeks later (during which time they received no treatment).  The researchers claim they were trying to assess the “durability of diabetes prevention.”  Here’s the rub:  25% of the patients on insulin tested positive for diabetes at the end of the study.  A few weeks later (during which time they weren’t being treated) some of the people who initially tested negative for diabetes (insulin obviously must have been protecting them), now tested positive, increasing the total to 30%.  This must have happened because they were no longer protected by insulin!  Err, no.  Diabetes in the control group, the group who was deprived of insulin from the start, went from 31% to 35% during the same exact time period.  It’s not “durability of diabetes prevention,” it’s experimental bias: by only RE-testing people who were initially negative, the total could only stay the same (if there were no false negatives) or go up (if there were false negatives).  The fact that it went up in both groups could simply mean that the re-test either: 1) detected diabetes in some people who falsely tested negative the first time around; and/or 2) generated some new false positives.  To correct for this, they should have also re-tested anyone who tested positive for diabetes.  *The importance of this difference is described below.

Exhibit B.  Disclaimer: statistics are the bane of my existence.

The rate of disease was rather high in both groups (>>10%); if you calculated the  “relative risk (RR)” instead of “odds ratio (OR),” you’d get 0.857. An RR of 0.857 is not as pretty as an OR of 0.80 (lower is better).  Their “OR of 0.80” was barely statistically significant (p = 0.05); I’d be willing to bet that an “RR of 0.857” would not have been so lucky… so why did they choose to publish the OR?  OK, no suspense necessary:  I think if this measurement turned out non-significant, then the entire study would’ve been a waste of time and a LOT of money.  And they would have no shot at an entirely new market for their same old drug.  *This is precisely why proper diabetes diagnoses and statistical analyses were so critical in this study.  To be clear: this is going to come down to a numbers game, and the numbers don’t support a new indication for insulin in pre-diabetics.  But fuzzy math and biased testing makes this appear as though it is a debatable conclusion.

HbA1c, a marker of long-term glucose control was 6.4% at baseline in both groups.  Insulin therapy lowered this to 6.3% (not exactly something to write home about) while it drifted to 6.5% in controls.  This insignificant effect of insulin on HbA1c didn’t come cheap, however.  The insulin treated group experienced a huge number of severe hypoglycemic episodes: 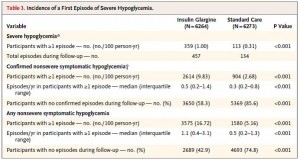 Not surprisingly, the severity of hypoglycemia was totally downplayed in Sanofi’s press release despite it being the most robust and statistically significant finding in the entire study.

People in the insulin-treated group got a little heavier (by about 5 pounds), and surprisingly, the control group lost a little weight (about a pound).  I say “surprisingly” because this population is expected to be weight stable or gaining weight.

Lastly, fortunately, there was no difference in mortality.  This is not unexpected because the intervention was mild and the patients were relatively healthy (i.e., not people who need nightly insulin injections).  When a more intensive insulin intervention was tested on frank diabetics, the study was halted because too many people died.  Enter: The ACCORD study.

Effects of intensive glucose lowering in type 2 diabetes (circa 2008) 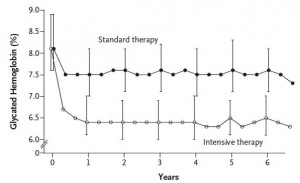 but it also lowered lifespan: 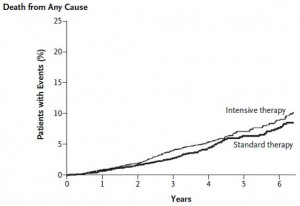 In conclusion:  YES, high blood glucose is the culprit, and YES, it needs to be lowered.  But NO, insulin injections are not the answer.  If you have lactose intolerance, you stop eating lactose.  These people have glucose intolerance; they need to stop