Admittedly, the effect of diet on metabolic rate is small (i.e. statistically non-significant in most cases), but its incredible consistency across space and time suggest it could be true.  And given the difficulty of maintaining a reduced body weight after dieting, it might even be important.  The following studies are examples of widely differing subject populations in various metabolic conditions; yet the effects of diet on metabolic rate exhibit a phenomenal degree of similarity.

disclaimer: I don’t know what’s more important – metabolic rate per se, the diet behind it, or the resulting hormonal adaptations.  All of the diets that are associated with a higher metabolic rate are also predicted to result in lower insulin levels and higher fat oxidation.  Thus, we are left with a triumvirate of diet, hormonal milieu, and energy expenditure… all of which are important for body composition and quality of life.

Metabolic ward, inpatient, crossover study; ladies and gentlemen, that’s about as good as it gets.  +1.  Kudos, Dr. Abbot.  This study was performed in weight stable healthy and diabetic subjects after ~1 week on the following diets:

Total energy expenditure was 76 kcal/d greater in nondiabetics and 41 kcal/d greater in diabetics on high fat relative to high carb.  Over the course of a month, this would add up to 2280 and 1230 kcal, respectively.  This isn’t a lot of calories, but it was a crossover study, so each participant underwent each treatment; thus, these data are not confounded by anything (in other words, they’re probably true).  Furthermore, physical activity, an indicator of energy levels and quality of life, was higher in the high fat groups despite the intervention not lasting long enough for proper adaptation.  RQ was lower indicating higher fat oxidation and a I suspect this would result in a more favorable effect on body composition if the diets were maintained longer (it takes much longer to adapt to increased fat intake than increased carb intake [mitochondria don’t come easy]).

For the record: 43% carbs is not very low carb and 42% fat is not very high fat.  These are reasonable and easily doable amounts of carbs and fat.

This 4-week hypocaloric (weight loss) study employed diets that were similar to Abbott’s (above):

The difference in energy expenditure, however, was much greater than that observed by Abbott: by the end of the intervention, those assigned to a high fat diet were burning 198 more kilocalories per day, which adds up to 5940 kcal per month.  RQ was lower and energy expended during exercise was higher (all good things).

Again, this isn’t an extreme diet, so the differences were small, but the physiological effects are undoubtedly meaningful.

In another well-designed crossover study, metabolic rate was assessed in weight lifters (WT), runners (AT), and nonathletes (NA) fed the following diets for a week:

The data presentation was a bit cryptic, so I’ve color-coded it.  Weight lifters (“WT”) are in red.  Comparing the two red lines, you can see that metabolic rate declined to a greater extent on high carb (right) relative to high fat (left).  A similar trend is observed in nonathletes (“NA,” in green).  And in the runners (“AT”), metabolic rate increased on high fat and decreased on high carb. 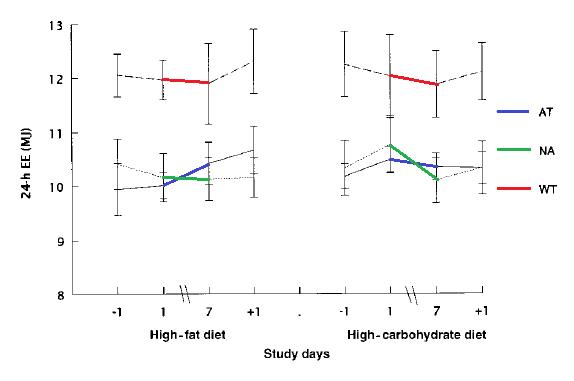 Conclusion
All in all, higher fat and lower carb diets are associated with higher metabolic rate across the board in a wide variety of people: weight stable diabetics and nondiabetics (Abbott); weight reduced obese (Rumpler); weight stable lifters, runners, and nonathletes (Roy); and sedentary overweight adults during weight loss (Johnston).  Furthermore, while the higher fat oxidation observed on these [non-extreme] diets generally reflects dietary intake, it also bodes well for body composition.

Soapbox
The effect of diet composition on metabolic rate is fundamentally different than that of caloric intake on body weight.   The latter, which comprises the metabolic advantage theory, is fiercely debated in the realms of academia, the blogosphere, and beyond.  Given my non-confrontational personality, I’m not likely to throw my hat in the ring; that doesn’t mean I won’t nibble on the individual components (metabolic rate being one of them).  I don’t care for the general thesis of metabolic advantage, but I do care for any diet that requires a less severe caloric restriction, preserves energy expenditure, or promotes a more favorable change in body composition.  As such, “eat less move more” is not the answer; nor is “calories in calories out.”  Call it treason if you like, but I prefer to call it data. 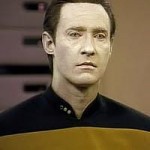 One response to “Metabolic rate per se”