The biochemical similarities between resistance to the metabolic effects of leptin and insulin are ultra-complicated.  The studies discussed below suggest leptin sensitization is a pre-requisite for glycemic improvement and weight loss.  Similarly, low leptin levels (independent of fat mass) appear to be linked with high insulin sensitivity and the ability to lose weight.  “Low leptin” in this context (i.e., independent of fat mass) does not refer to the starvation-induced rapid decline of leptin or the complete absence of leptin, but rather to a high degree of leptin sensitivity (analogous to insulin sensitivity?).  The level at which this signal is mediated, however, remains to be determined (adipocyte? sympathetic nervous system? brain? in the Electric Kool-Aid?). 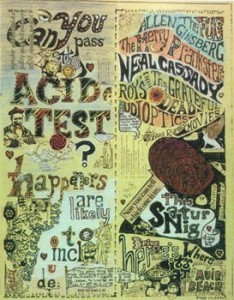 Is the resistance to high levels of endogenous leptin in established obesity similar to the effects (or lack thereof) of exogenously administered metreleptin? 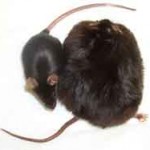 My current hypothesis: 1) leptin sensitivity needs to be high and 2) leptin levels need to be adequate (too low and leptin sensitivity is meaningless; too high and you become leptin resistant).  This is summarized nicely in this clever little experiment (Knight et al., 2010 PLoS ONE).  Ob/ob mice genetically lack leptin.  Zero leptin, and monstrously obese (the mouse on the right).  If you add back the amount of leptin found in a lean insulin sensitive mouse (~5 ng/mL), they gain just as much weight on any diet as normal mice (and much less than untreated ob/ob mice [the mouse on the right]).  But here’s the catch: on a high fat diet, treated ob/ob mice gain as much weight (top row, left figure) despite much lower leptin levels (top row, right figure).

Ob-norm mice are phenomenally leptin sensitive (bottom right), but do not have enough leptin to support insulin sensitivity (bottom left) or physical activity (bottom middle figure).  If leptin levels are too high (wild-type mice on high-fat diet), on comes leptin resistance (bottom right) and glucose intolerance (bottom left).  This picture is incomplete but good enough to support the claim that leptin sensitivity needs to be high and leptin levels need to be adequate.

Higher insulin sensitivity in those with the lowest leptin levels (this group is probably the most leptin sensitive): 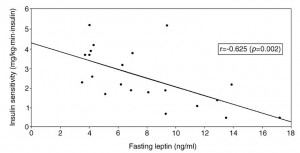 The most insulin sensitive group (Tertile 3) has the lowest leptin levels but also the lowest body fat (i.e., it could be confounded by fat mass)

But the middle group is more insulin sensitive than the lowest group (by definition), and has lower leptin levels despite being fatter.  So it’s definitely not confounded by fat mass, and I think this is because they are more leptin sensitive. 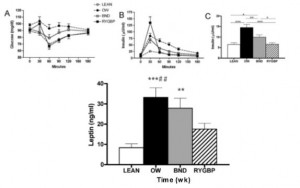 Still not confounded by weight loss because the banded group weighed more but had lower leptin and higher insulin sensitivity than the overweight group.  In support of enhanced leptin sensitivity in the gastric bypass group, they experienced a significantly greater increase in post-meal satiety than the other groups.  Similarly, the overweight group (who have much higher leptin levels) actually experienced a decline in satiety after eating!

Injection with leptin (squares) or amylin (triangles) alone does not reduce food intake or body weight in leptin-resistant diet-induced obese mice (open circles), but a combination of leptin and amylin does both (closed circles). 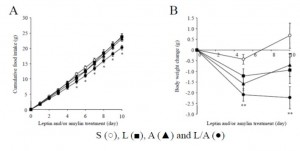 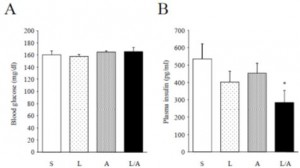 In other words, the leptin-resistant mice could be artificially made more sensitive to their own endogenous 28.5 ng/mL of leptin with 100 ug/kg/d amylin, but not to their lower 19.7 ng/mL of leptin (in this study).

This graph is showing a proxy for leptin sensitivity in rat brain.  The black bars are vehicle-treated, the white bars are leptin-treated.  Amylin-alone increased sensitivity to both endogenous leptin (second to the last bar) and exogenous leptin (last bar).  And indeed, amylin-alone (open triangles in the figure below) reduced body weight; the addition of exogenous leptin further reduced body weight (compare inverted triangles [leptin alone] to squares [leptin plus amylin]). 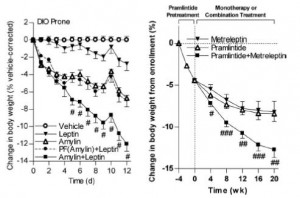 Similar results are obtained in humans (figure on the right).

The intermediate effects in mice illustrate an important point.  Amylin-induced sensitization to endogenous leptin, as seen in rats and humans but not mice, is required to reap the full benefits of leptin re-sensitivation.  This didn’t occur in mice, but occurred in all species (including mice) when exogenous leptin was administered to restore leptin to an adequate level.

In sum, restoration of leptin sensitivity is required for glycemic improvement and weight loss regardless of whether it is achieved by gastric bypass (Korner study, above), amylin treatment (Kusakabe study in mice; Roth study in rats and humans), a sugar-free diet (Shapiro study, discussed HERE), or a low-carbohydrate diet (Brehm et al., 2003 JCEM – greater weight loss and glycemic improvement despite eating more calories [associated with lower leptin levels]).  Personally, I’d attempt either of the latter prior to gastric bypass or pharmacological therapy with an experimental cocktail of metreleptin and pramlintide.  But that’s just me.

Just like insulin, you gotta get leptin levels down, not up, to see benefits.