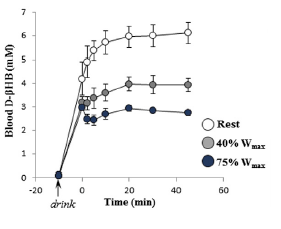 Here’s where the lines begin to blur, ie, where it gets interesting: 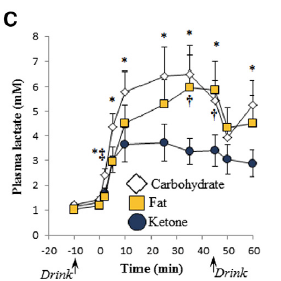 Exercising at a relatively high intensity is going to use a lot of carb, which produces lactate, and slugging down some butter isn’t going to change this (compare carb [open diamonds] and fat [yellow squares])… in contrast to ketoadaption, or in this case, ketone monoester (blue circles).  Ketone supps make anaerobic work appear more aerobic; in other words, ketones allow you to burn fewer carbs at the same relative intensity.

If you interested in this kind of stuff, Nanci Guest and Tim Noakes have been debating it relentlessly on Twitter lately.

Moving on, ketones blunt lipolysis, even more so than carb: 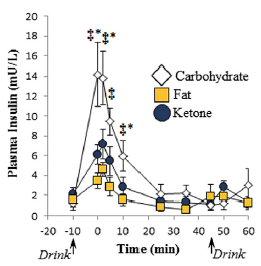 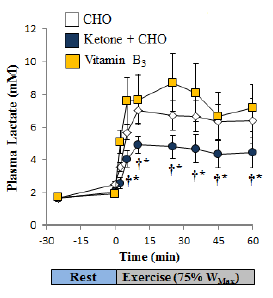 As expected and mentioned above in the “non sequiter nutrition notes,” ketones suppress glycogen use during exercise.  In the figure below, dark staining reflects muscle glycogen: 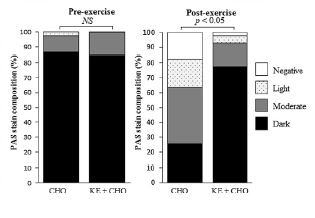 Ketone monoesters are ridiculously expensive, so no-go for weekend warriors or recreational athletes.  If you’re literally going for a Gold Medal, then a 2% improvement might make a difference.

Alternatively [theoretically], a carb-adapted metabolism might do just as well with a ketone boost as a ketoadapted metabolism would do with a carb boost (this appears to be how some of the elite “n=1” LC athletes do it).  But still, it’s like 100x less expensive to be ketoadapted & have some carbs than be carb-adapted and take ketone monoesters.  So, unless there’s a Gold Medal on the line or you have a money tree… ymmv.

So, throwing some ketone monoesters into your pre-workout drink might improve net physical performance, depending on your sport.  But then there’s that other issue, that elevated ketones and glucose = no bueno.  Acute physical performance boost at the expense of healthspan?  Idk.

#context
For full access to all articles and much more (or if you just like what I do and want to support it), become a Patron! It’s three bucks a month and there are many other options. Sign up soon because there are only a limited number of spots left at the $3 level. It’s ad-free and you can cancel if it sucks ????