Before you say anything, “elite artistic gymnasts” could probably beat you in a race running backwards.  (with you running forwards.)  They are elite athletes.  And given a sufficient keto-adaptation period, they perform better sans carbs.

So what exactly is a VLCKD?

And the normal diet was, well, normal:

They were allowed to eat as much as they wanted (“ad libitum”) as this study was designed to measure performance, not weight loss.  Accordingly, the diets were well-adhered to.  Despite this, the VLCKD group ended up eating 300 fewer kilocalories; and they lost weight. 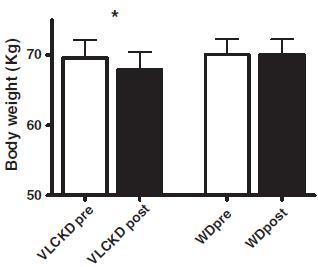 And this wasn’t just any weight, it was fat mass:

N.B. Muscle mass was completely maintained, no doubt assisted by the 200 grams of protein they were eating (2.5 g/kg). 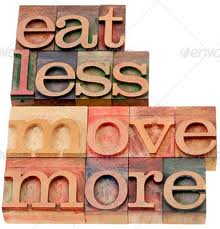 The Laws of Energy Balance +1

The VLCKDer’s lost fat mass while muscle was completely preserved.

“In the legs closed barrier maximum test, the subjects grab the bar and without oscillating the pelvis elevated the lower limbs to bring the back of both feet in contact with the bar.”  The VLCKDer’s could do this 13% longer by the end of the month, while the WDer’s experienced a 7% decline.

In other words, by the end of the test period, VLCKDer’s could hang upside down for 25% longer than WDer’s.  In the world of elite artistic gymnasts, this is big.  And these aren’t isolated findings.  As discussed at length in The poor, misunderstood calorie

, studies conducted by Steve Phinney in the 1980’s came to very similar conclusions: given a sufficient adaptation period (> 3 weeks), performance is not hindered and may even be enhanced by very low carb diets.  He confirmed this in both athletes and untrained obese subjects, suggesting it could work for just about anyone.  The body adapts to burn fat and fat-derived fuels, which apparently work better than carbs.

But back to the body composition data, the VLCKDer’s ate ~9000 fewer kilocalories over the course of the study, and lost 4 pounds – twice the expected amount of weight given that energy deficit…  Does this violate the Laws of Energy Balance?  Categorically, unequivocally, “no.”  In agreement with a slew of rodent studies (e.g., parts I, II, & III of the ketosis series), and even the notorious Ebbeling study in humans, diet affects energy expenditure.  Even if food intake and physical activity are controlled, increased metabolic rate can create an energy deficit right under your nose.  Any other dieters would’ve lost 2 pounds, and it probably would’ve been half muscle half fat.  But VLCKDer’s lost 4 pounds of fat.  By these numbers, it would appear as though the VLCKD created an energy deficit of 150 kcal per day, which is very close to the 300 kcal estimated for overweight/obese people on a very low carb diet.  I attribute this difference to the nature of the population being studied; elite gymnasts are finely tuned athletic machines with extreme metabolic flexibility.

In overweight/obesity, food intake usually spontaneously declines on low carb.  In these elite athletes, they lost weight but didn’t end up with a sluggish metabolic rate, and ultra-low insulin levels (< 10 mU) allowed this to physiologically manifest as fat loss.

If you’re interested in consultation with me, reach out: drlagakos@gmail.com.