Yes, we all pretend to know the mechanism how ketones may improve cognition in MCI/Alzheimer’s, but we don’t. Nobody does.

-Niacin receptor? if so, where are the studies on niacins or even nicotinamide riboside (the latter is kind of unrelated, but should yield some niacin in vivo) (P.S. blog post on NR in the works).

-Epigenetics? Idk. Of those, I’d say probably all contribute somehow.

Of the 15 participants, 5 dropped out; of the 10 remaining, 5 had diarrhea. The former was attributed to the ketogenic diet, the latter to MCTs. This 1/2 of 2/3 [or whatever] was actually their primary objective – IOW, is keto feasible in this population? Secondary objective, which would kinda only matter if the primary objective was affirmative, how does this impact cognition?

Results: 5 people achieved pretty high ketosis for most of the time. Lots of variability, though, which may be due to their “conservative evaluation of ketosis.” Ie, instead of just being non-reported, days that ketones weren’t reported were counted as zero  O_o  which, depending how frequently this happened, could’ve driven down the average.

This part is actually pretty interesting: nearly all participants, especially the most protocol-compliant ones, experienced significant cognitive improvements during the 3-month intervention that promptly declined after one month back on their prior diet.

For the rest of this article, including a deeper analysis of the data and my interpretation, head over to Patreon! Five bucks a month for full access and there are many other options. It’s ad-free and you can cancel if it sucks 🙂

Affiliate links: still looking for a pair of hot blue blockers? Carbonshade is offering 15% off with the coupon code LAGAKOS and Spectra479 is offering 15% off HERE. TrueDark is running a pretty big sale HERE. If you have no idea what I’m talking about, read this then this. 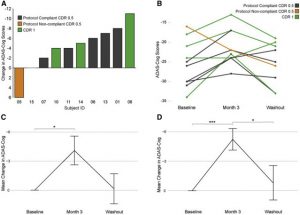