This one has a bit for everyone.

I think study was actually done a few years ago, originally published here (blogged about here), and re-analyzed through the eyes of Chris Gardner.  I think. (But it doesn’t really matter as the study design appears to be identical.)

.  Some people secrete more insulin than others (a marker of insulin resistance); these people also have a lower metabolic rate after weight loss = increased propensity for weight regain.  However, if these people follow a low carbohydrate diet, then the reduction in metabolic rate is attenuated.  Some people who don’t secrete a lot of insulin after a glucose load may do better in the long-run with a lower fat diet.

It’s an extension of the basic insulin theory

: more insulin secretion = less nutrients available in the blood, and if food intake is strongly controlled (like it was in this study), energy expenditure declines to compensate.

There are two relevant figures in this paper.  Here’s one of ‘em: 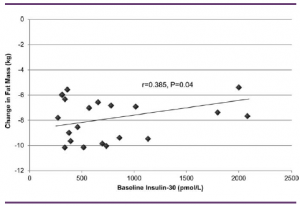 If insulin is low 30 minutes after a glucose load prior to the weight loss intervention, then more fat mass is lost during said intervention (P=0.04).  Regardless of diet composition (pretty much).

In the original study, everyone lost weight via calorie restriction, then were randomized to isocaloric low, medium, or high carb diets for weight loss maintenance.  Then switched, and switched again; a three-way crossover.

Here’s the rub: the low carb diet reduced the insulin response to a glucose load (ie, improved insulin sensitivity), and this effect is maintained for a while after carbs are re-introduced.  So in the crossover design, if you were assigned to a low carb diet first, then your insulin response to glucose is still lower on the next diet, and as it goes, energy expenditure is still improved.

The magical ~300 kilocalories is back again.  Figure 2: 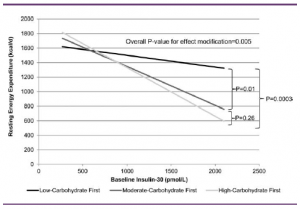 This is a bollixed crossover (in a sense), and what we’re seeing is an “order effect” because the same thing doesn’t happen to those assigned to a high carb diet first… but it’s an interesting angle of the insulin hypothesis!  [You can probably interpret this another way (I certainly can), but I rather like this way.]

…and according to this analysis, reduced insulin secretion is associated with higher energy expenditure, and better chances for sustained weight loss (theoretically*). 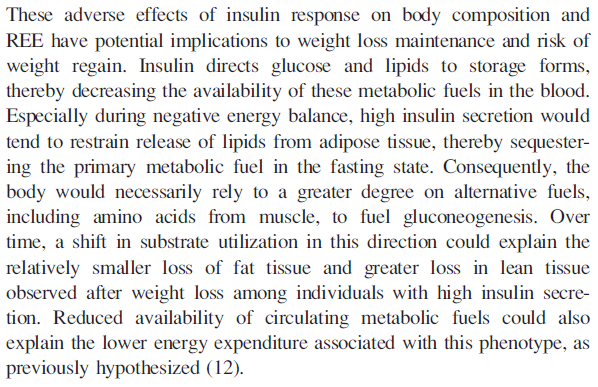 No, the insulin hypothesis is not dead, but it’s not the whole story.

Another important disclaimer/confounder: weight loss per se (regardless of method) improves insulin sensitivity and overall health in many people.  Best advice is to find the method which is the least painful for you, that works.  At the end of the day, sustainability & adherence = 100%.

Also, read this article by Dr. Corkey, and don’t be an insulin hyper-secretor: Banting Lecture 2011: hyperinsulinemia, cause or consequence?