Nice review article about the great diversity of carbohydrate-modified diets used in the treatment of gastroin-testiness.

the full version (click to enlarge, print, and use as a cheat sheet): 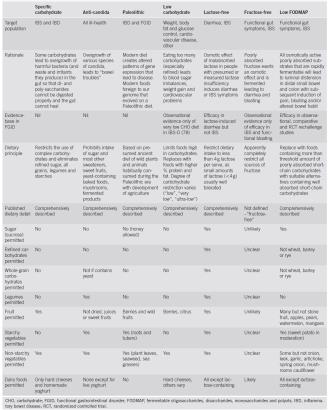 If you find overly simplistic summaries of complicated diets annoying, skip down to part 2 asap.

All of these diets are carbohydrate-restricted to some degree:
-highest carb: Lactose-free & Fructose-free
-lowest carb: LC

Fruits are another divider:
-Lots of fruit allowed SCD

Potatoes are allowed on Paleo & FODMAPs but not LC.

Gluten-free & casein-free: GAPS, Paleo, LC, & FODMAPs are all GFCF (for the most part).  Some minor exceptions for certain dairy products – cheese & yogurt allowed on SCD & LC but not Paleo & FODMAPs.  FODMAPs might have room for fermented dairy if most of the lactose is vanquished.

FODMAPs is the most complicated diet, but there are some hints: LC is FODMAPs by default (LC excludes all carbs, while FODMAPs excludes some carbs), and Paleo is pretty close.

The “stone fruits” allowed in LC & Paleo might be problematic for someone on FODMAPs. 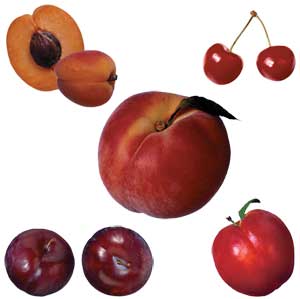 The only flaw I see in FODMAPs is inulin

exclusion (and the allowance for potentially a lot of sugar :/  [but that’s a different story]).  Bifido are reduced in IBS, and FODMAPs lower them even more by excluding inulin (Staudacher et al., 2012).  This seems a bit like throwing out the baby with the bathwater – bifidobacteria are the good guys, and studies with inulin & GOS almost always show improved GI symptoms accompanied by increased bifidobacteria.

Done.  An unofficial executive summary of My tummy hurts

Part 2.  GOS: a FODMAPs-friendly inulin alternative, and the most bifidogenic agent on the face of the Earth.

By some lucky quirk of nature, galactooligosaccharides are not metabolized like inulin

and are therefore OK on FODMAPs.

We have a lot of bifidobacteria

at birth, and there’s GOS in breast milk.  Bifido declines as we age, as does breast milk consumption.  Coincidence?

Just a few grams of GOS per day, and bifidobacteria increase by the thousands to millions (eg, Depeint et al., 2008* and Silk et al., 2008).  *I especially like the Depeint paper because they compared two different GOS preparations and show that one in particular (trans-galactooligosaccharides “B-GOS”) was remarkably more effective than Vivinal GOS (the real reason I liked that paper is below).

About a year ago I started ranting about galactooligosaccharides & bifidobacteria, but there weren’t any commercially available GOS products, so my focus was on the next best thing: inulin

, which usually requires twice the dose and increases bifido by the hundreds to thousands, not thousands to millions like GOS.

Update: Bimuno is available from the UK, and is reasonably well-priced – about twice the cost of inulin per gram but since you only need about half as much, a pretty good deal.  *Bimuno = B-GOS, the one that did better in the Depeint paper 😉