A. You learn glucagon is the bad guy.

Zero insulin makes you hyperglucagonemic, hyperglycemic, and ketoacidotic (see first column).  Insulin cures all of these things (second column), but they aren’t caused by insulin deficiency, per se… they’re caused by high glucagon, which itself is cured by insulin (second column) and SRIH (somatostatin, third column).  Cure the hyperglycemia by inhibiting glucagon and pathological diabetic ketoacidosis suddenly becomes physiological ketosis.

Zero insulin makes you hypermetabolic and increases amino acid oxidation.  Insulin cures this, but again, it appears to be driven by hyperglucagonemia, not insulin deficiency.

Glucagon directly correlates with energy expenditure, and this isn’t the good metabolic rate boost sought by dieters, it’s the type that indiscriminately burns everything including muscle.  High protein diets also increase energy expenditure, but in pathological hyperglucagonemia, the amino acids come from muscle, not food. 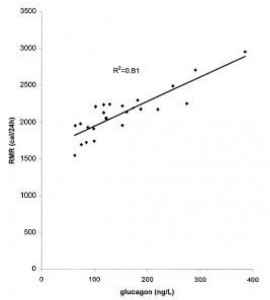 The above mentioned study is most relevant to type I diabetes.  The following study is about glucagon and the far more common type II diabetes (Petersen and Sullivan, 2001 Diabetologia).

The effects of hyperglucagonemia can be blunted by glucagon receptor antagonists (GRAs).  In the figure below, a GRA (Bay-27-9955), was administered immediately prior to a glucagon infusion.  The GRA significantly reduced blood glucose levels, an effect largely attributed to the reduction in endogenous glucose production:

One of the ways GRA’s accomplish this is by keeping glucose tied up in hepatic glycogen instead of flooding into the plasma (Qureshi et al., 2004 Diabetes; “CPD” is the GRA used in this study).  The figure on the left is primary human hepatocytes; on the left is in mice. 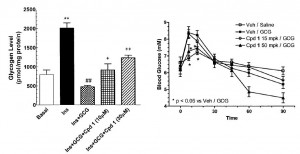 Another way of looking at this is in mice chronically treated with glucagon or glucagon plus a GRA.  Glucose tolerance is obviously deteriorated by glucagon treatment, but is completely restored by a GRA (Li et al., 2008 Clinical Science): 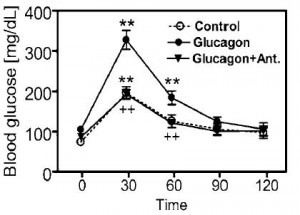 One of the most severe side effects of diabetic hyperglycemia is nephropathy, which is similarly cured by GRA treatment: 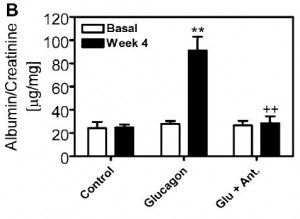 Furthermore, reducing glucagon action isn’t limited to glucagon receptor antagonists (GRAs), leptin and amylin can do it too! 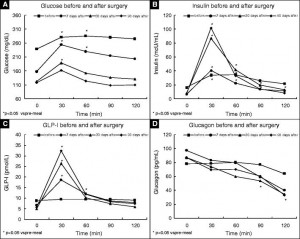