These researchers set out to tackle a huge issue, but ended up answering 2 very small parts of 1 very important question.  That is, does fructose cause obesity?  More specifically, they were asking about the relationship between fructose, leptin resistance, and obesity.  Leptin is the homeostatic wonder protein; it is secreted from fat cells when they are full, and signals “well-fed” to the brain.  Downstream effects include increased metabolic rate, fertility, reduced appetite, and more energy.  During fasting, leptin rapidly plummets which signals “starvation” to the brain.  Downstream effects include reduced metabolic rate, infertility (not enough stored energy or food available to support a baby), and hunger.  In obesity, leptin is very high but the signal never makes it to the brain = leptin resistance.  Theoretically, if leptin sensitivity of an overweight or obese patient could be improved, their physiology would ‘normalize’ resulting in the loss of excess fat mass.

These are rat studies.

In this first set of experiments, the chow-fed rats were switched to low fat diet with or without a high dose of fructose.  Prior to starting the feeding trial, all rats were leptin-sensitive (i.e., leptin injections caused a reduction in 24 hour food intake): 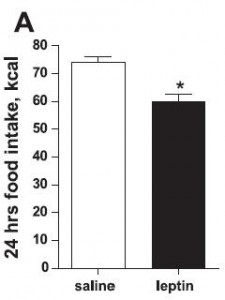 remember, both diets are very low fat.  This may appear counterintuitive; shouldn’t a high fructose (high sugar) be more fattening than a high starch diet?  Sometimes.  Rodents, however, fatten with extremely good efficiency on a high fat diet.  So added fructose on a low-fat diet is not very obesogenic in rodents.

HOWEVER, the fructose-fed rats were leptin-resistant: 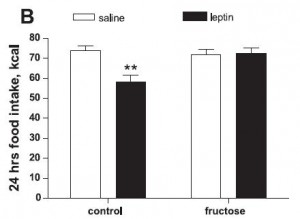 Next, half the fructose-fed rats were switched to a low fructose very high fat diet.

I am still a bit confused as to why fructose-induced frank leptin resistance had no effect on food intake or fat mass in rats fed the low fat diet.  But I find it very interesting that fructose-induced leptin resistance turned into high fat diet-induced hyperphagia and obesity despite very low fructose in the high fat diet… IOW, this may be a ‘legacy’ effect of fructose.  Fructose loads the gun…  (take away the fructose and you’ve still got a loaded gun) …

Although somewhat confusing, some of these findings are in accord with my belief that in the etiology of obesity, physiology is considerably disrupted prior to the onset of weight gain.  The source of this disruption is the diet.

This same group of researchers did a nice follow-up study in 2011.  They showed that 1) leptin-resistance increased the susceptibility to high fat diet-induced obesity (2008 study); and now they wanted to test if 2) this was reversible (2011 study).

From a nutritionist’s perspective, the diets were chosen fairly well:

For the first week, food intake was highest on the very high fat diet, and accordingly, they gained the most weight:

Looks like short-term fructose intake (@ 40% of calories) isn’t so bad when dietary fat is only 30% (HFr/HF, closed circles).

In their next experiment, they compared HFr/HF vs. SF/HF.  These diets are very similar except that instead of fructose, the SF/HF diet contains starch.  Both contain 50% carbs & 30% fat.

Despite ingesting a similar amount of calories, 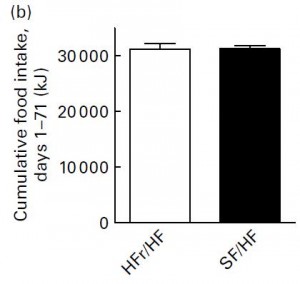 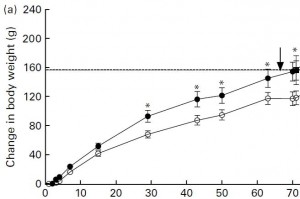 So fructose is significantly more fattening than starch (anyone surprised?).  And interestingly, fructose’s intrinsic fattening capacity extends beyond its caloric contribution (same total calorie & fat intake in both groups).  [Same calorie intake, more fat gain with fructose relative to starch … all calories are not created equal!]

Next, they tested leptin sensitivity.  This was done by injecting leptin intraperitoneally and measuring food intake for the next 24 hours.  Leptin is supposed to induce satiety (i.e., reduce food intake).  Leptin injections reduced food intake in SF/HF but not HFr/HF: 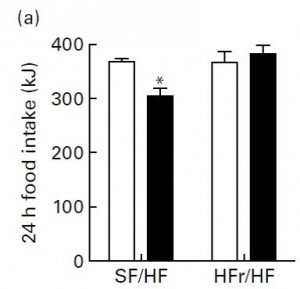 Open bars are before leptin injection, closed bars are after.  So fructose caused increased fat mass and leptin resistance.  This brings up an important point.  That is, if the HFr/HF group was leptin resistant, why did they eat as much as SF/HF?  More on this below.

After 70 days on the diet, the researchers did something interesting.  So far, we have seen that fructose can cause leptin resistance on low fat (2008) and high fat diets (2011).  Next they researchers asked if removing fructose could reverse the leptin resistance.  So they took the HFr/HF group and switched half to SF/HF.  WRT body weight gain, rats fed the HFr/HF diet (closed circles) continued on their normal route while those switched to the SF/HF diet (open squares) gained significantly less weight and actually started to approach the weight of rats who were fed the SF/HF diet all along:

Importantly, this normalization was not in fact magical, the rats switched from HFr/HF to SF/HF consumed fewer calories than the other two groups: 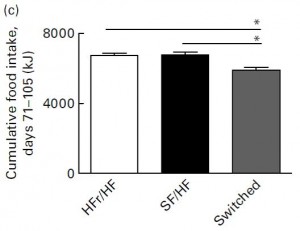 18 days after the switch, leptin sensitivity was re-assessed: 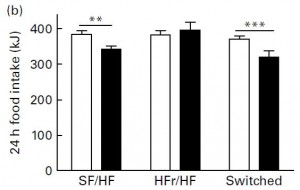 In as little as 18 days, leptin sensitivity was completely restored by removing fructose.  This says, fairly conclusively, that in this context, fructose was sufficient to cause leptin resistance.  (… now I challenge someone to find a study showing that fructose is necessary to cause leptin resistance … necessary and sufficient are two very important factors to determine true causality on a number of levels).

To really drive this home, leptin sensitivity was assessed by injecting leptin directly into the brain:

The open circles are the controls (SF/HF injected with saline).  They showed no major changes in BW or FI, just like the leptin resistant HFr/HF rats who actually received leptin injections but were leptin-resistant (closed squares).  The rats fed SF/HF (closed circles) and those switched from HFr/HF to SF/HF (closed inverted triangles) exhibited significantly reduced food intake and they lost weight.

One small plastic wrench in the gears.  When switched from HFr/HF to SF/HF, the rats ate significantly less.  They were also more leptin sensitive.  Did they eat less because removing fructose normalized their appetite?  That would be the more attractive conclusion, however it turns out that SF/HF didn’t taste as good as HFr/HF (surprise surprise, this is why your soda is filled with high-fructose corn syrup, not starch).   When rats accustomed to chow (open squares) were given access to both HFr/HF (closed circles) & SF/HF (open circles), they chose HFr/HF: 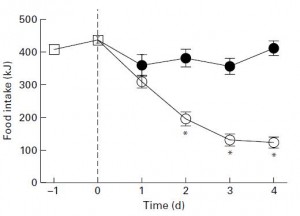 Take-home points:  as long as there was no sugar, the high fat diet did not cause obesity.   The level of dietary fat used in this study was about 2-3x higher than standard rodent chow.  Fructose + high fat caused obesity, leptin resistance, and overconsumption; removing fructose reversed these things.  Fructose possesses an intrinsic fattening element beyond its caloric contribution.

Now back to the calorie, fat mass, food intake issue mentioned above:

the HFr/HF group was leptin resistant, had more fat mass, but ate the same amount of food as SF/HF, which led me to conclude that fructose possesses an intrinsic fattening capacity beyond its caloric value.  HFr/HF rats were eating just as many calories as SF/HF rats; and they weighed more, so if you normalized food intake to body weight, HFr/HF rats would actually be eating less than SF/HF despite gaining more weight… so how can I say they were eating too much?

For one, the end justified the means.  They were accumulating fat mass, ipso facto however many calories they were ingesting was too much.  As mentioned above, HFr/HF were eating less if normalized to body weight, but since body weight is irrelevant in the face of increased adiposity, we can say that indeed, the HFr/HF group was simply eating too much.  In this example, it is helpful to consider food intake relative to energy expenditure.  Thus, neither food intake nor energy expenditure needs to be measured, only changes in fat mass.  I believe this is valid because 1) certain dietary components, e.g. fructose, have metabolic effects beyond their caloric value, and 2) while body weight may be governed by calories, fat mass is not.  Calorie counting does not work.

This entry was posted in Advanced nutrition, Fructose. Bookmark the permalink.