Eat fish people.  No, don’t eat “fishpeople,” … nevermind.  I am a strong proponent of eating salmon so this blog was created to figure out which is the best kind to eat.  Priorities are 1) least toxins and 2) best fatty acid composition.

Round 1. Metals in salmon: Farmed vs. wild

A survey of metals in tissues of farmed Atlantic and wild Pacific salmon (Foran et al., 2004)

Farmed Atlantic salmon were sourced from North American commercial suppliers and included salmon from British Columbia, Chile, Maine, and Norway.  They got 10 fish from 3 different suppliers in each region: 4 regions x 3 suppliers/region x 10 fish = 120 fish. Species: Farmed Atlantic (didn’t realize that was a species…  this is one of those “a-duh” moments).

Wild salmon were from suppliers in Alaska, British Columbia, and Washington for a total of 6 batches of 10 fish.  Species: chum & coho. 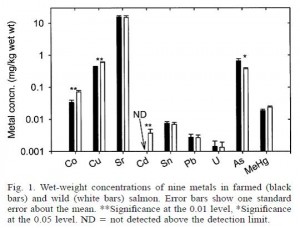 The authors noted some statistically significant differences in cobalt, copper, cadmium (all modestly higher in wild salmon), and the nontoxic “organic” arsenic (higher in farmed salmon), but while those differences may be significant statistically, they don’t look significant physiologically.  (if the authors wanted to make the differences look bigger, perhaps they should have opted for a linear ordinate; or maybe they just wanted to squeeze everything in one figure instead).  Interestingly, similar levels of these metals were found regardless of where the salmon came from.  I would’ve imagined a Farmed Atlantic salmon from Norway would be vastly different than a Farmed Atlantic from British Columbia.  Guess not.

As expected, mercury content was correlated with body size (higher up on the food chain, more mercury accumulation), but this is pretty much meaningless to the consumer because we have no idea of the fish’s weight when it was intact.  IOW, the salmon on the bottom (figure below) would have less mercury than the one on the top, 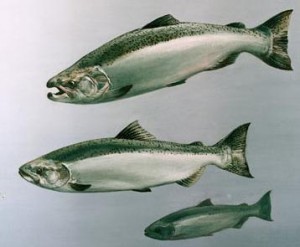 But I have no way of knowing who these came from (salmon fillets): 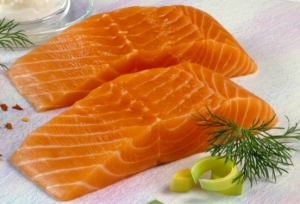 Fortunately, salmon is a relatively “clean” fish, so it doesn’t really matter.

Back to the data.

acceptable levels for metals in fish:

Farmed Atlantic and wild (Coho & Chum) salmon were equivalent and well beneath both the FDA and the far more stringent EPA’s limits.  On a side note, I learned that the FDA allows a higher amount of contaminants because they are talking about exposure to each contaminant individually.  The EPA is stricter because they are taking into consideration the fact that we are exposed to multiple contaminants simultaneously (“toxic world,” and all that jazz).  For example, you would be safe consuming a fish with 76.0 mg/kg inorganic arsenic if that were the only toxin to which you were exposed.  But when multiple toxins are present, as they most likely are in our diet, the cutoff for inorganic arsenic is set at 0.002 mg/kg.  The FDA allows 38,000 times more inorganic arsenic than the EPA; that seems grievously negligent but in reality, the amount in commercial fish is significantly lower.  It’s like saying you must be at least 2 inches tall, by the EPA’s standards, or 5 inches tall, by the FDA’s standards, to go on a rollercoaster ride.

Round 2. Pesticides: Farmed vs. wild salmon

Side note: even if your exact city or region isn’t on this list, I suspect the conclusions can be reasonably applied to just about everywhere. 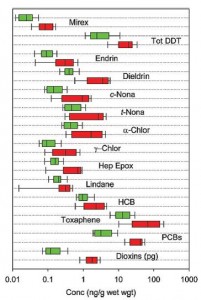 Figure 3. Contaminants present in Farmed (red) or wild (green) salmon.  It looks like for every contaminant Farmed and wild are similar, but Farmed always has a little more (beware of the deceptive log scale) 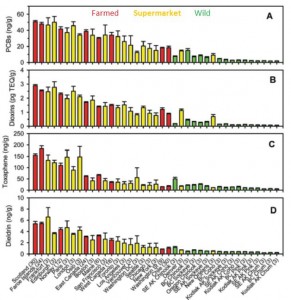 This figure is very busy.  Concentration of contaminants in Farmed (red), supermarket Farmed Atlantic fillets (yellow), and wild (green) salmon.  Focus on the cities listed at the bottom: the ones toward the left (Europe) are ultra-toxic; the ones on the right (Pacific [Alaska]) are the most safe.  Conclusion from these data: Wild Pacific is safe, Farmed Atlantic is intermediate, and anything European is toxic.  Avoid Scottish salmon like the plague.  And microwave popcorn.

WRT farmed salmon, it looks like most of the problem is with the fish feed: 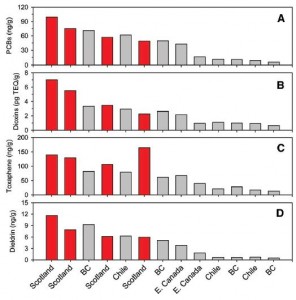 Round 3.  Fatty acid composition as per www.NutritionData.com

And there were even species-differences:  Alaskan Silver native coho (1,876 mg) had much higher EPA + DHA than Alaskan King Chinook (1,150 mg).

WRT EPA + DHA, Farmed Atlantic and silver Alaska native coho were best and wild Pacific was the lowest.  IMHO the benefits of DHA & EPA outweigh the malefits of contaminants because the dose of EPA + DHA in a serving of salmon is sufficient to reap many of the benefits of EPA & DHA, while the dose of contaminants is too low to cause harm.  Therefore I’m going to stick with Farmed Atlantic.  OOTH if silver Alaska native coho is similar to Kodiak salmon (which I think it is), then it has the lowest contaminants as per the Hites study and 2nd highest EPA DHA as per nutritiondata.

This entry was posted in Advanced nutrition, Fish. Bookmark the permalink.